Generalised anxiety disorder (GAD) is characterized by persistent feelings of fear and worry about everyday things that are difficult to control. [APA 2013]

The diagnosis of GAD consists of two main components: 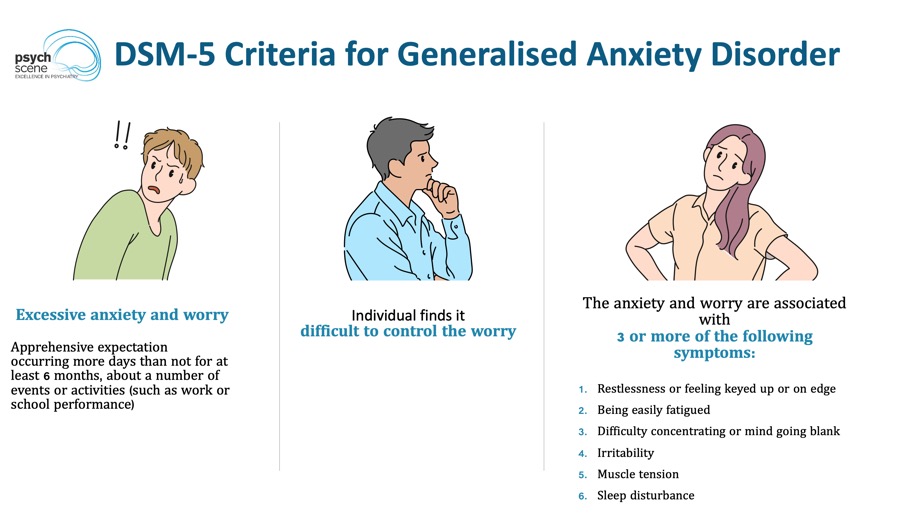 2. The individual finds it difficult to control the worry

3. The anxiety and worry are associated with  3 or more of the following symptoms:

People with GAD seek reassurance to reduce immediate worry, avoid events that could have negative consequences and spend considerable time preparing for events to minimize worry.

GAD is on average only diagnosed 10 years after onset at which point the patient has gone to the doctors due to comorbid issues such as panic disorder, depression, or chronic pain disorders. [Andrews et al 2018]

Therefore, all patients that are diagnosed with anxiety should be screened for depression as well.

The initial assessment should address behaviour and somatic symptoms; the evaluation of psychosocial stress and developmental issues in the context of past medical history can be used to exclude other organic causes. 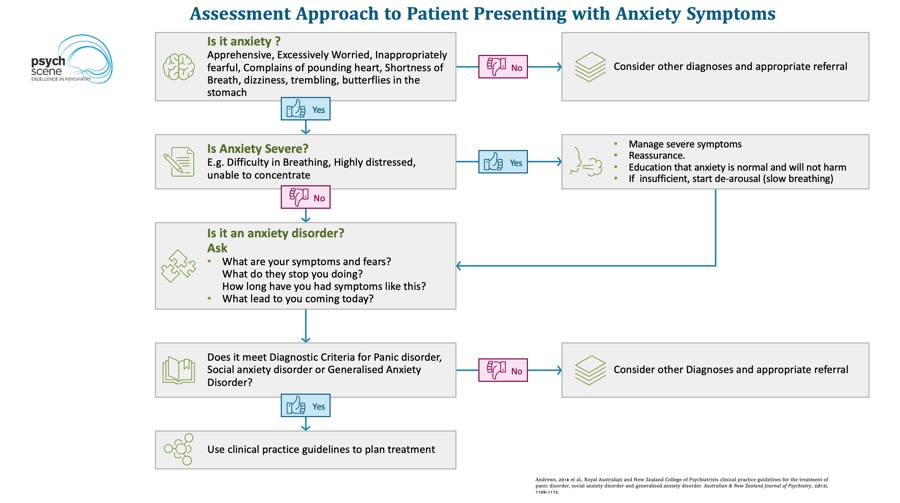 Tests for thyroid function, blood glucose level, echocardiography, and a toxicology screen are important at this early stage. 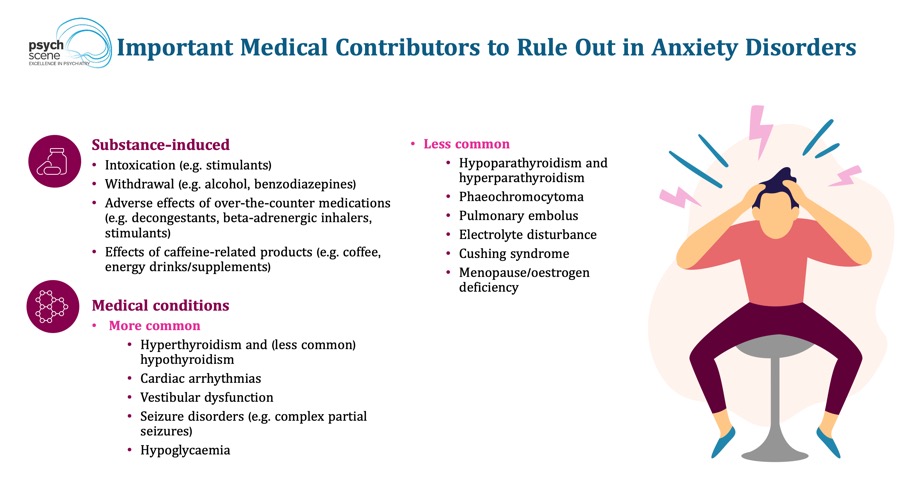 1. Brief GAD-7 self-report assessment is a validated diagnostic tool that detects a patient’s latent anxiety and how this affects their ability to respond to an item in a particular manner. There are 7 questions and the responses can be either: “not at all”, “several days”, “over half the days”, and “nearly every day” [Spitzer et al 2006]:

2. Penn State Worry Questionnaire-3 (PSWQ-3) is an ultra-brief 3-item version of the PSWQ, which has 16-items. [Meyer et al 1990]; [Berle et al 2011] The 3-item version is suggested to have similar psychometric properties as the full PSWG version and has been confirmed to detect a good measure of pathological worry:

The art in making the diagnosis of GAD is to shift the focus from the problem being worried about today, to the act of worrying. The question ‘Do you think you are a worrier by nature?’ often leads to a discussion of how worrying – not today’s target for worry – is the core issue.

DIFFERENTIATING GAD FROM DEPRESSION AND OCD 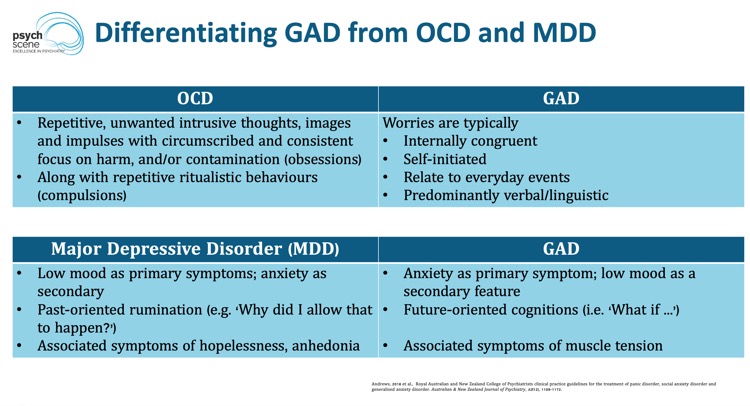 Read Melancholic and Psychotic Depression – Review of Diagnosis and Management

As with all disorders across the anxiety spectrum, a pragmatic approach that includes psychoeducation and information on lifestyle factors (e.g. healthy lifestyle choices concerning diet, exercise, and sleep) is encouraged. [Andrews et al. 2018]

CBT is considered more effective than other psychotherapies and should include 8 to 12 sessions. Interestingly, the Cochrane Database of Systematic Reviews suggests that 5 to 8 sessions may produce more benefits in GAD patients than ≥9 sessions of CBT. [Hunot et al. 2007]

Delivery of CBT (face-to-face or digitally) is the first-choice option as there is evidence that both forms of CBT are more effective than pharmacotherapy. [Cuijpers et al. 2014] However, this is also dependent on severity, as well as patient preference, accessibility, cost, and tolerability. CBT has three stages: 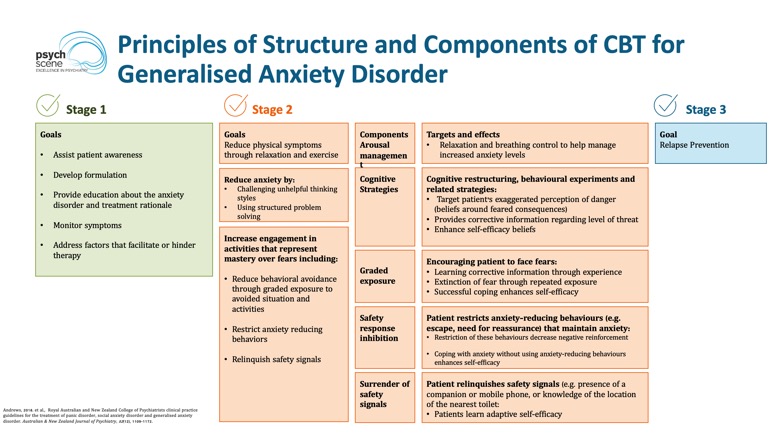 CBT should be started as early as possible, and if this is not feasible, then digital CBT should be initiated. [Robinson et al. 2010]

CBT should be individual rather than group CBT as there is an earlier improvement and greater reductions in worry and depressive symptoms as well as higher adherence rates (9% vs 24% attrition rates, respectively). [Hunot et al. 2007]; [Covin et al. 2008]

Other psychotherapy alternatives, such as applied relaxation, mindfulness, and acceptance-based interventions, have limited evidence. 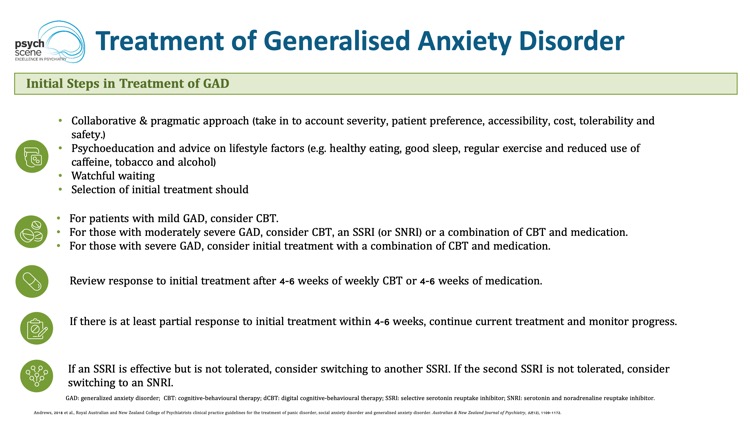 After 4 to 6 weeks of either CBT or medication, the response should be reviewed for efficacy and safety. [Andrews et al. 2018]

If there is a partial efficacy, then treatment continues.

However, if not, then modifications can be made based on what treatment strategy was initially decided. 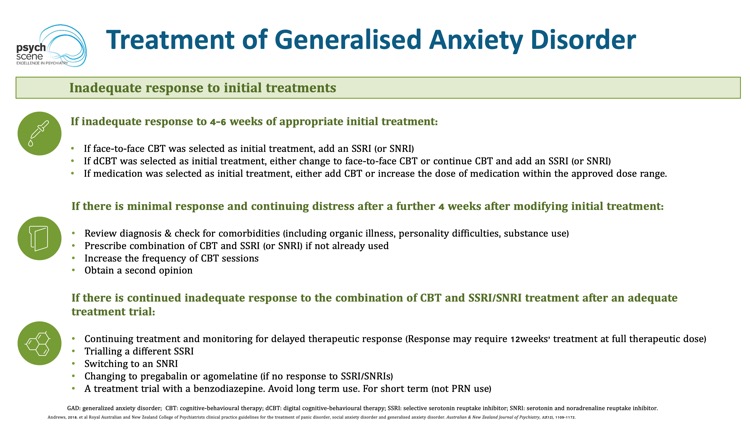 A recent network meta-analysis across 89 trials and including a total of 25,441 patients with GAD, compared treatment efficacy by determining the effect on the Hamilton Anxiety Scale Score (HAM-A). The researchers estimated the mean treatment difference (MD) from baseline along with a 95% credible interval (95% CrI). [Slee A et al., 2019]

The researchers also extracted data on trial discontinuation as a measure of treatment acceptability. Here, it was observed that patients administered quetiapine were less likely to complete the trial compared to placebo.

In comparison, duloxetine, pregabalin, venlafaxine and escitalopram had much lower discontinuation rates.

Other well studied pharmacological options for GAD with established efficacy include paroxetine (MD -2.29; 95% CrI -3.11 to -1.47) and benzodiazepines (MD -2.29; 95% CrI -3.19 to -1.39). Although these drugs have a moderate effect on HAM-A, in practice, these treatments come with a much higher discontinuation rate compared to placebo.

This analysis also showed that while mirtazapine, sertraline, fluoxetine, buspirone, and agomelatine were effective and well-tolerated treatment options; these findings were limited by their small sample sizes (n=318, n=485, n=264, n=311, and n=202, respectively).

Learn more about Anxiety disorder guidelines in this presentation by Prof Sean Hood.

Worry is a normal part of life; however, GAD is an excessive and chronic disorder that significantly affects normal day-to-day functioning and overall quality of life.

Clinicians should be aware of the myriad of comorbid disorders that often present with GAD.

Evidence suggests psychoeducation and lifestyle changes as well as CBT as the most effective forms of therapy. SSRIs /SNRIs are effective medications that can be considered first-line or if CBT is ineffective. 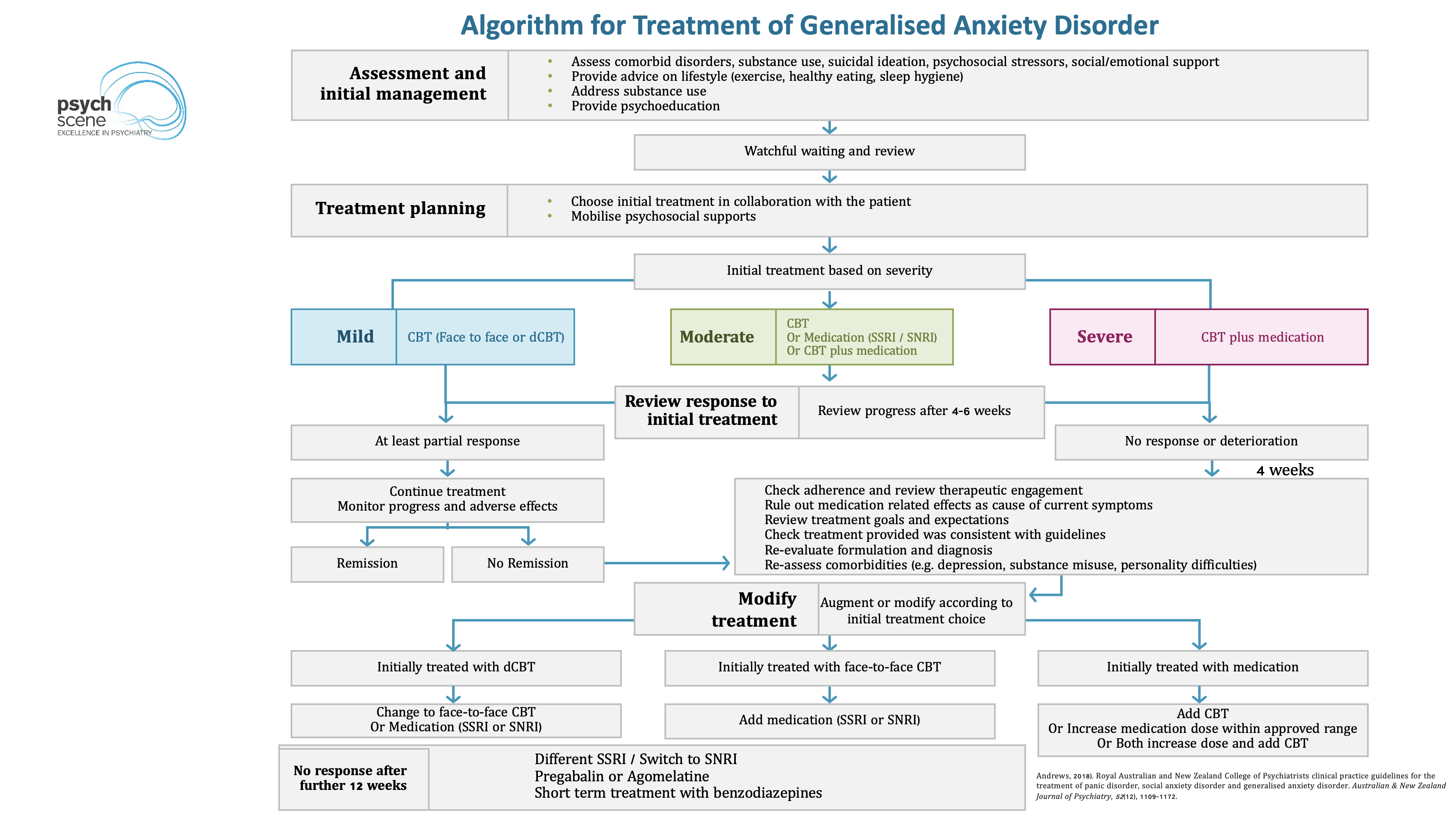 Diagnosis and response to therapy can be evaluated using a variety of screening tools; however, successful outcomes will likely require a tailored approach to the individual patient.

The development of anxiety: the role of control in the early environment

Chorpita B and Barlow D. The development of anxiety: the role of control in the early environment. Psychol Bull. 1998;124:3-21.

A contemporary learning theory perspective on the etiology of anxiety disorders

Mineka S and Zinbarg R. A contemporary learning theory perspective on the etiology of anxiety disorders. Am Psychol. 2006;61:10-26.

A brief measure for assessing generalized anxiety disorder: The GAD-7

Development and validation of the Penn State Worry Questionnaire

Cognitive behavioral therapy, sertraline, or a combination in childhood anxiety

A Randomized, Placebo-controlled study of Duloxetine for the treatment of children and Adolescents with Generalized Anxiety Disorder

Fluoxetine for the treatment of childhood anxiety disorders