Why are Frontal Lobes Important in Psychiatry – Clinical and Examination Tips

The frontal lobe is one of the most important areas of the brain. Besides the presence of frontal eye fields and a number of other motor areas, the frontal lobe also maintains psychological homeostasis.It is responsible for maintaining optimal mood, behaviour and social judgement.

It controls the speed of thought and actions through its connections with the subcortical areas.

While a detailed description of its role is outside the scope of this article, I’ll try to list some important aspects that clinicians should keep in mind when dealing with psychiatric presentations.

After all, the majority of psychiatric disorders can be conceptualised as fronto-temporo-limbic in origin (except Alzheimer’s disease which affects the temporoparietal areas).

THE CASE OF PHINEAS GAGE - A ROD THROUGH THE FRONTAL LOBE

Some of the earliest understanding of the role of the frontal lobe came from the case of Phineas Gage.

Phineas Gage suffered a terrible accident that resulted in an iron rod driven into his left frontal lobe after he placed the iron on an explosive device.

Despite the seriousness of the injury, he was able to walk up to a cart which took him to the hospital. Following this, he showed a pronounced change in personality and behaviour becoming disrespectful and lacking in social skills and soon lost his job.

While this is a drastic scenario, in psychiatric clinical practice, a milder involvement of frontal lobe is extremely common and can be due to a range of abnormalities, e.g. vascular, vitamin deficiencies, endocrinal, structural, substance use etc. 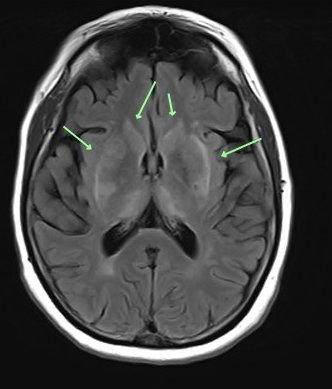 Frontal lobe functioning was abnormal as the frontal-subcortical circuits were involved.

Within the frontal subcortical circuits, Dopamine (DA) is the principal NT.

A dopaminergic expansion during early hominid evolution could have enabled successful chase-hunting in the savannas of sub-Saharan Africa, given the critical role of dopamine in counteracting hyperthermia during endurance activity.

In turn, changes in physical activity and diet may have further increased cortical dopamine levels by augmenting tyrosine and its conversion to dopamine in the central nervous system (CNS).

By means of the regulatory action of dopamine and other substances, the physiological and dietary changes may have contributed to the vertical elongation of the body, increased brain size, and increased cortical convolutedness that occurred during human evolution.

The Prefrontal cortex (PFC) is a main cortical target of both NA and DA innervations with both neuronal systems modulating PFC activity in addition to memory and attentional performance. [Xing B et al., 2016]

DA and Acetylcholine (Ach) became the predominant neurotransmitters in the left hemisphere and noradrenaline (NA) and Serotonin (5HT) in the right hemisphere. [Previc H., 1999]

In clinical practice, a clinician should have a high index of suspicion of possible frontal lobe involvement in treatment-resistant disorders as many clues to frontal lobe involvement come from subtle signs and collateral history, e.g. change in personality, fatuousness, untidiness, slowness of action and thought, perseveration, etc. which is not always evident on a cross-sectional interview.

A cognitive examination involving the frontal lobe can uncover this to a large extent.

Two of my favourites are the Clock Drawing Test [1] and the Luria 3 step test (fist-edge-palm). There are several others that one can perform (Verbal fluency, Go-No-Go test, Trail making etc.), but be sure to perform tests that test for verbal and non-verbal functions. 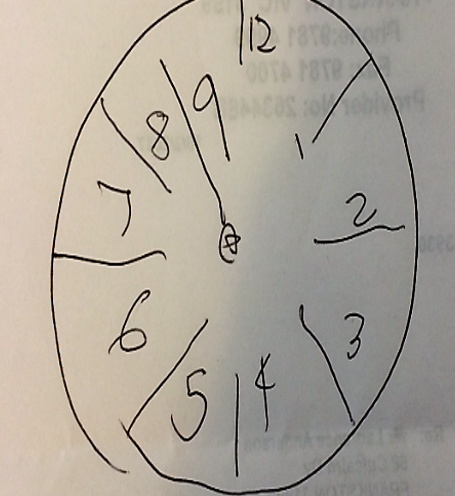 Patient with alcohol use and depression. MRI showed bilateral temporal and asymmetric frontal atrophy. Clock drawing test shows a gross abnormality with lack of planning, numbers 10 and 11 missing and arrows put incorrectly. (Instructions being 10 past 11)

Luria on its own has good sensitivity and specificity in identifying neurocognitive impairment, and it takes about a minute to perform the test [2].

The FAB is a brief tool that can be used at the bedside or in a clinic setting to assist in discriminating between dementias with a frontal dysexecutive phenotype. It consists of the following six tests:

What are the similarities between a banana and an orange?

A table and a chair

A tulip, a rose and a daisy

12 is considered normal for each alphabet.

“Tap twice when I tap once.”

“Tap twice when I tap once.”
To ensure that the patient has understood the instruction, a series of 3 trials is run: 1-1-1.

“Tap once when I tap twice.”
To ensure that the patient has understood the instruction, a series of 3 trials is run: 2-2-2.

Then perform a conflicting series.

If the patient takes the examiner‟s hands, try again after asking the patient: “Now, do not take my hands.”

We covered the role of frontal lobes in depression in more detail in the case study on depression.

Anhedonia is an interest-activity symptom dimension that has been associated with dopamine dysfunction in the basal ganglia and impaired cortical-striatal reward circuitry. [Felger and Miller 2012]

Deficits in interest, motivation, and hedonic capacity are linked to treatment-resistant depression and are underpinned by dysregulation of the dopamine pathway in frontal subcortical circuits.

These symptoms are often associated with poor outcomes with antidepressants that selectively target the norepinephrine and serotonin systems. This same symptom constellation is thought to be most highly dependent on an intact dopamine system. [Felger and Miller 2012]

Poor diet and lack of exercise that afflicts modern-day humans may contribute to the premature ageing of the human brain and the specific reduction in the activity of key transmitters such as dopamine. Read more about the role of diet and exercise in mental health.

A recent case outlined how a frontal meningioma mimicked a relapse of psychosis [3].

The onset of depression in frontal lobe involvement can be secondary to the decline in executive functioning along with the involvement of areas responsible for drive and motivation.

This leads to frustration and a decreased ability to cope with stress as the set-shifting ability is reduced. Patients develop anxiety related to change in routines or having to do something new.

On pointing this out to some of them, they have remarked:

At least I know it’s not me, I can try and do things differently.

Furthermore, showing patients images of scans helps patients understand why they may be experiencing difficulties. It validates their experience visually.

It helps patients recognise the issue and try other strategies such as lifestyle modification, breaking tasks down, stress management rather than purely look at medication as the answer (when often in such cases it is only part of the solution).

The bottom line is; when the psychiatric issue seems to be resistant to treatment, think about the frontal lobes, it may just be the elephant in the room.

Norepinephrine versus dopamine and their interaction in modulating synaptic function in the prefrontal cortex.

2. Luria’s three-step test: what is it and what does it tell us

Cytokine effects on the basal ganglia and dopamine function: the subcortical source of inflammatory malaise.