Evidence Based Summary of the ADHD International Consensus Statement

The World Federation of ADHD International Consensus Statement recently made 208 evidence-based conclusions about ADHD. [Faraone et al., 2021]. In this article, we summarise the key points for clinicians.

Research, however, shows that there are no meaningful differences in the IQ of adults with ADHD. [Bridgett and Walker 2006]

As such, ADHD impairs the functioning of highly intelligent people, and intelligence should not be a barrier to diagnosis.

Furthermore, impairments in working memory and other executive functioning domains such as reaction time variability, response inhibition, planning, and organisation appear to have larger deficits in children than adults. [Pievsky and McGrath 2018]

We covered the neurobiology of ADHD and diagnosis and management of ADHD in previous articles. For a clinical perspective on the evaluation of ADHD, please view the video by Dr Sanil Rege.

DIAGNOSIS AND PREVALENCE OF ADHD

ADHD is usually diagnosed between the ages of 6 to 12 years, with a rate of approximately 5.9% of school-aged children. [Willcutt et al. 2012]

Although ADHD diagnoses have become more common, this may reflect our increased understanding and recognition of the disorder.

A diagnosis requires neuroimaging, neurological testing, and a clinical interview with a parent and/or patient.

Detailed review on Diagnosis of ADHD.

The aetiology of ADHD has genetic and environmental components; these components have also ucheen shown to interact with each other, whereby different genotypes influence susceptibility to different environmental risks. [Faraone et al. 2015]

In addition, DNA studies have shown that genetic and environmental effects are shared with other psychiatric disorders (e.g., schizophrenia, bipolar disorder, depression, and ASD). 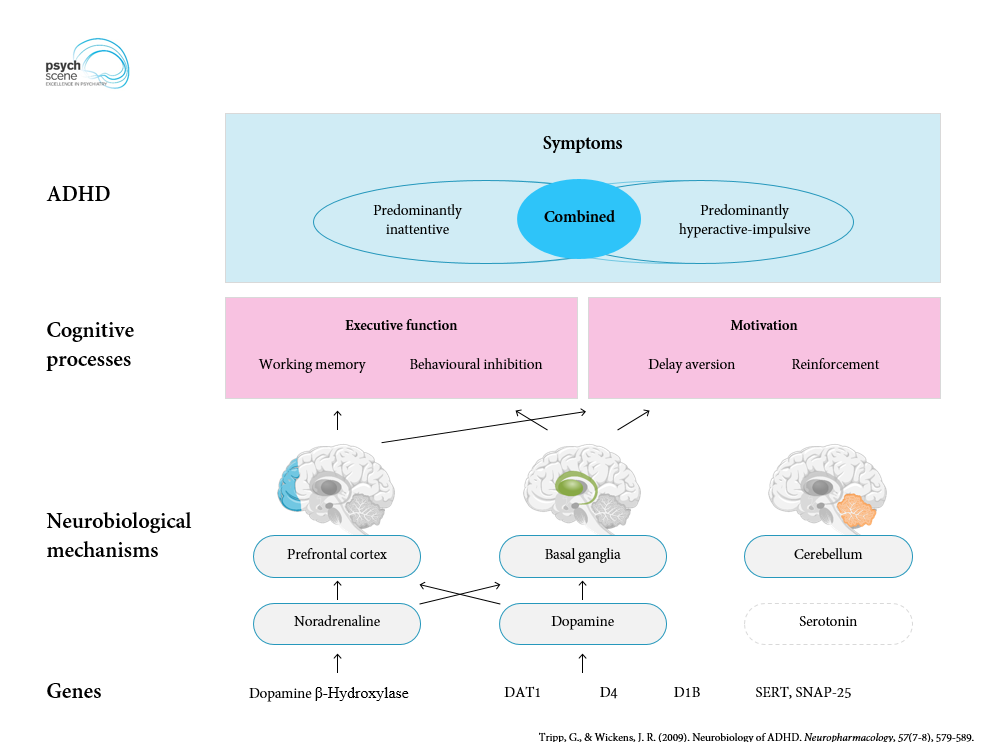 IMPACT ON QUALITY OF LIFE

Research shows that children with ADHD have impaired social and school functioning. For instance, moderate impairments have been observed for sharing, cooperation, and reciprocation and socialising with peers and social information processing (i.e., social cues and social problem solving). [Ros and Graziano 2018] 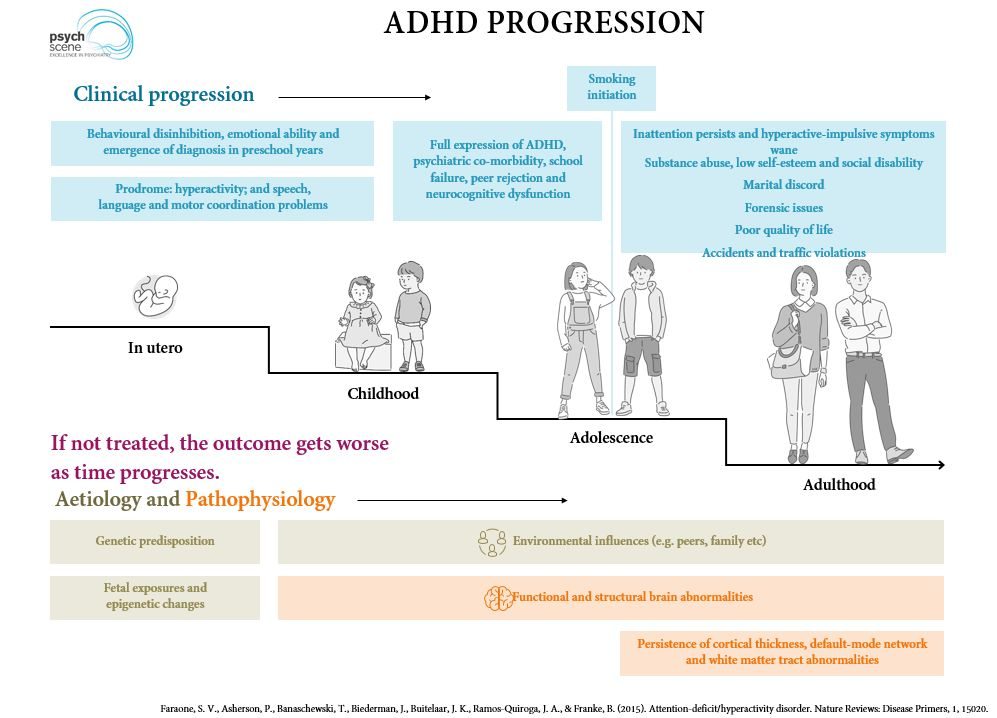 Of note, treatment with methylphenidate and lisdexamfetamine has been shown to result in small-to-moderate reductions in emotional dysregulation, whereas atomoxetine only resulted in small reductions. [Lenzi et al. 2018]

The treatments with the best benefit-to-risk ratios were methylphenidate for children and adolescents and amphetamines for adults. [Cortese et al. 2018]

In addition, recent discussions on the detrimental impact of a “Western pattern” diet have increased parent interest in making lifestyle-related changes to treat ADHD symptoms (i.e., to restrict sugar, additives, preservatives, and oligoantigenics). Oligoantigenic foods are foods that could potentially provoke an allergic response.

This is particularly prevalent when pharmacotherapy has proven unsatisfactory or is unacceptable.

Our understanding of ADHD has increased over the last decade.

While further research is needed to develop optimal treatments, appropriate diagnosis and management of ADHD can improve the lives of the many people who suffer from the disorder and its complications.

The World Federation of ADHD International Consensus Statement: 208 Evidence-based conclusions about the disorder

Intellectual functioning in adults with ADHD: A meta-analytic examination of full scale IQ differences between adults with and without ADHD.

Bridgett, David J., and Michael E. Walker. “Intellectual functioning in adults with ADHD: a meta-analytic examination of full scale IQ differences between adults with and without ADHD.” Psychological assessment 18.1 (2006): 1.

The Neurocognitive Profile of Attention-Deficit/Hyperactivity Disorder: A Review of Meta-Analyses

Prevalence and Risk Factors Associated With Attention-Deficit/Hyperactivity Disorder Among US Black Individuals: A Systematic Review and Meta-analysis

Nilsen F and Tulve N. A systematic review and meta-analysis examining the interrelationships between chemical and non-chemical stressors and inherent characteristics in children with ADHD. Environ Res. 2020; 180:108884.

Prenatal Exposure to Acetaminophen and the Risk of Attention-Deficit/Hyperactivity Disorder: A Nationwide Study in Taiwan

Iron Status in Attention-Deficit/Hyperactivity Disorder: A Systematic Review and Meta-Analysis

Prenatal exposure to maternal smoking during pregnancy and attention-deficit/hyperactivity disorder in offspring: A meta-analysis

Association of Hypertensive Disorders of Pregnancy With Risk of Neurodevelopmental Disorders in Offspring: A Systematic Review and Meta-analysis

The maternal prepregnancy body mass index and the risk of attention deficit hyperactivity disorder among children and adolescents: a systematic review and meta-analysis

Jenabi E et al., The maternal pre-pregnancy BMI and the risk of ADHD among children and adolescents: a systematic review and meta-analysis. Korean J Pediatr. 2019; 62(10):374-379.

Maternal Thyroid Dysfunction During Pregnancy and the Risk of Adverse Outcomes in the Offspring: A Systematic Review and Meta-Analysis

Comedication and Polypharmacy With ADHD Medications in Adults: A Swedish Nationwide Study

Association Between ADHD and Obesity: A Systematic Review and Meta-Analysis

Sleep in adults with autism spectrum disorder and attention deficit/hyperactivity disorder: A systematic review and meta-analysis

Associations between Attention-Deficit/Hyperactivity Disorder and Ocular Abnormalities in Children: A Population-based Study

Social Functioning in Children With or At Risk for Attention Deficit/Hyperactivity Disorder: A Meta-Analytic Review

Meta-analysis of quality of life in children and adolescents with ADHD: By both parent proxy-report and child self-report using PedsQL™

Serious transport accidents in adults with attention-deficit/hyperactivity disorder and the effect of medication: a population-based study

ADHD and relative risk of accidents in road traffic: a meta-analysis

Effect of drugs on the risk of injuries in children with attention deficit hyperactivity disorder: a prospective cohort study

Association between suicidal spectrum behaviors and Attention-Deficit/Hyperactivity Disorder: A systematic review and meta-analysis

Comparative efficacy, acceptability, and tolerability of dexmethylphenidate versus placebo in child and adolescent ADHD: a meta-analysis of randomized controlled trials

Cheng J et al., Efficacy and safety of atomoxetine for attention-deficit/hyperactivity disorder in children and adolescents-meta-analysis and meta-regression analysis. Psychopharmacology. 2007; 194:197-209.

Pharmacotherapy of emotional dysregulation in adults with ADHD: A systematic review and meta-analysis

Comparative efficacy and tolerability of medications for attention-deficit hyperactivity disorder in children, adolescents, and adults: a systematic review and network meta-analysis

Methylphenidate and the risk of psychosis in adolescents and young adults: a population-based cohort study.

Impact of physical exercise on children with attention deficit hyperactivity disorders: Evidence through a meta-analysis

Short- and Long-Term Effects of Parent Training for Preschool Children With or at Risk of ADHD: A Systematic Review and Meta-Analysis

Rimestad M et al., Short- and long-term effects of parent training for preschool children with or at risk of ADHD: a systematic review and meta-analysis. J Atten Disord. 2019; 23:423-434.