Epigenetics is the study of heritable changes that alter gene expression levels without altering the DNA sequence.[Deans & Maggert, 2015]

However, there are a multitude of poorly defined definitions that confer and contrast how epigenetics is defined. In its broadest sense, epigenetics can be considered as “heritable memory”, an adaptive and dynamic process that ensures proper genomic function through the regulation of gene expression activity.[Jaenisch & Bird, 2003], [Gibney & Nolan, 2010]

According to the NIH Epigenomics Roadmap Project:

Epigenetics refers to both heritable changes in gene activity and expression (in the progeny of cells or of individuals) and also stable, long-term alterations in the transcriptional potential of a cell that are not necessarily heritable. 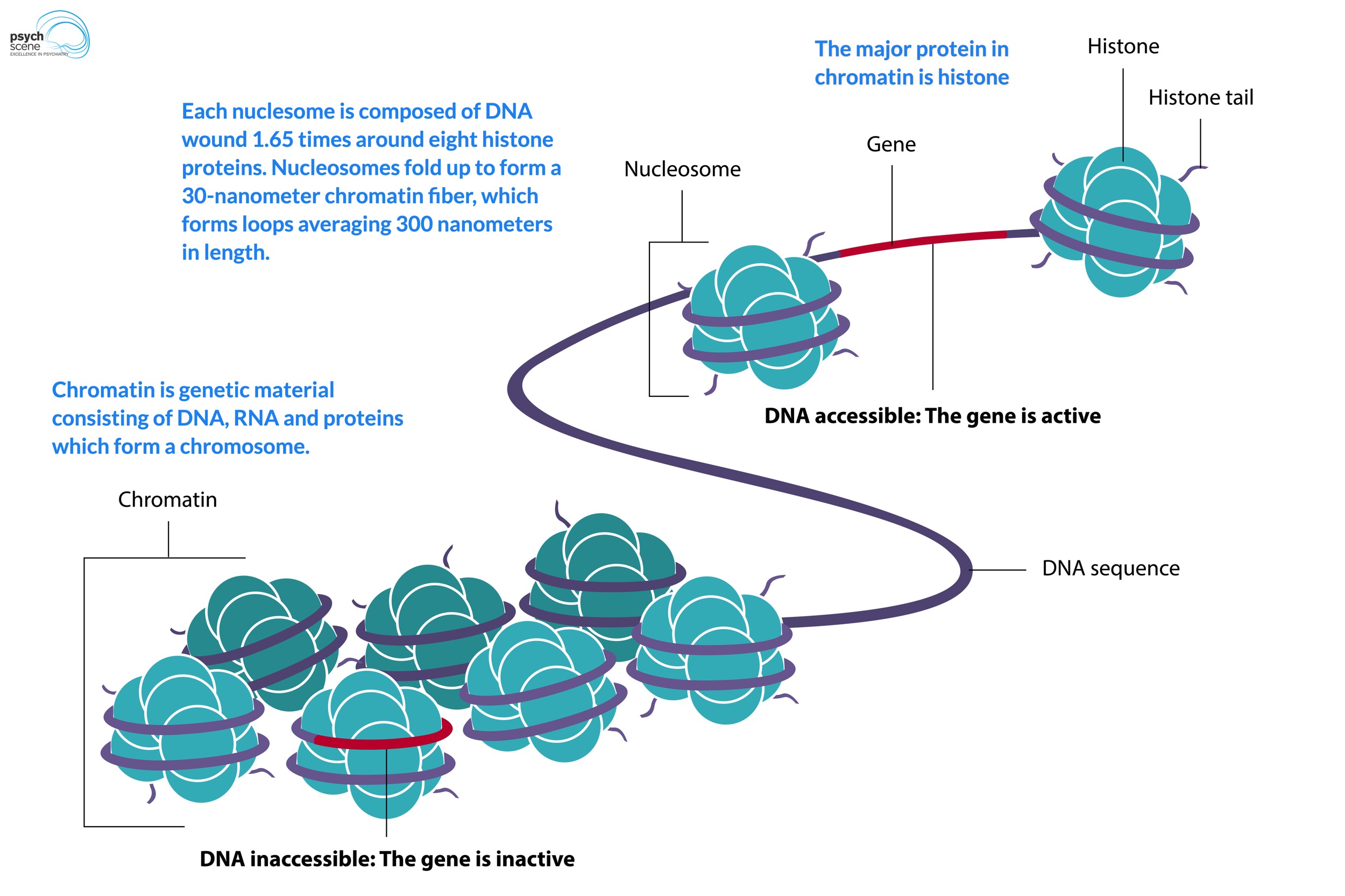 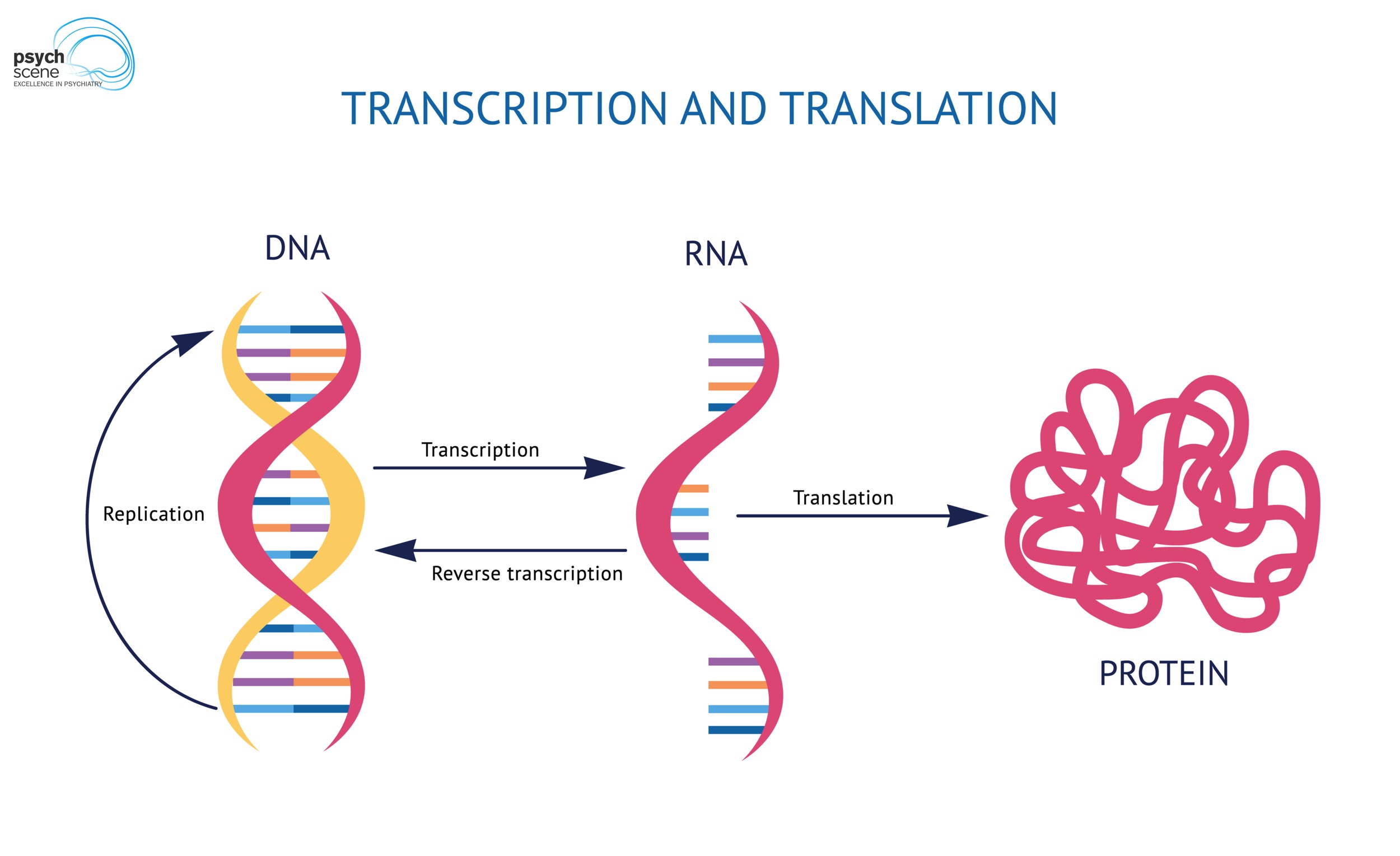 Many types of epigenetic processes have been identified—they include methylation, acetylation, phosphorylation, ubiquitylation, and sumoylation. Some of the structural and chemical adaptations to DNA that modify and influence gene expression activity have the following mechanistic components: [Aristizabal et al., 2020]

In particular, methylation and demethylation processes (mediated by DNA methyltransferase enzymes) have emerged as an important investigation area in furthering our understanding of epigenetic modifications. 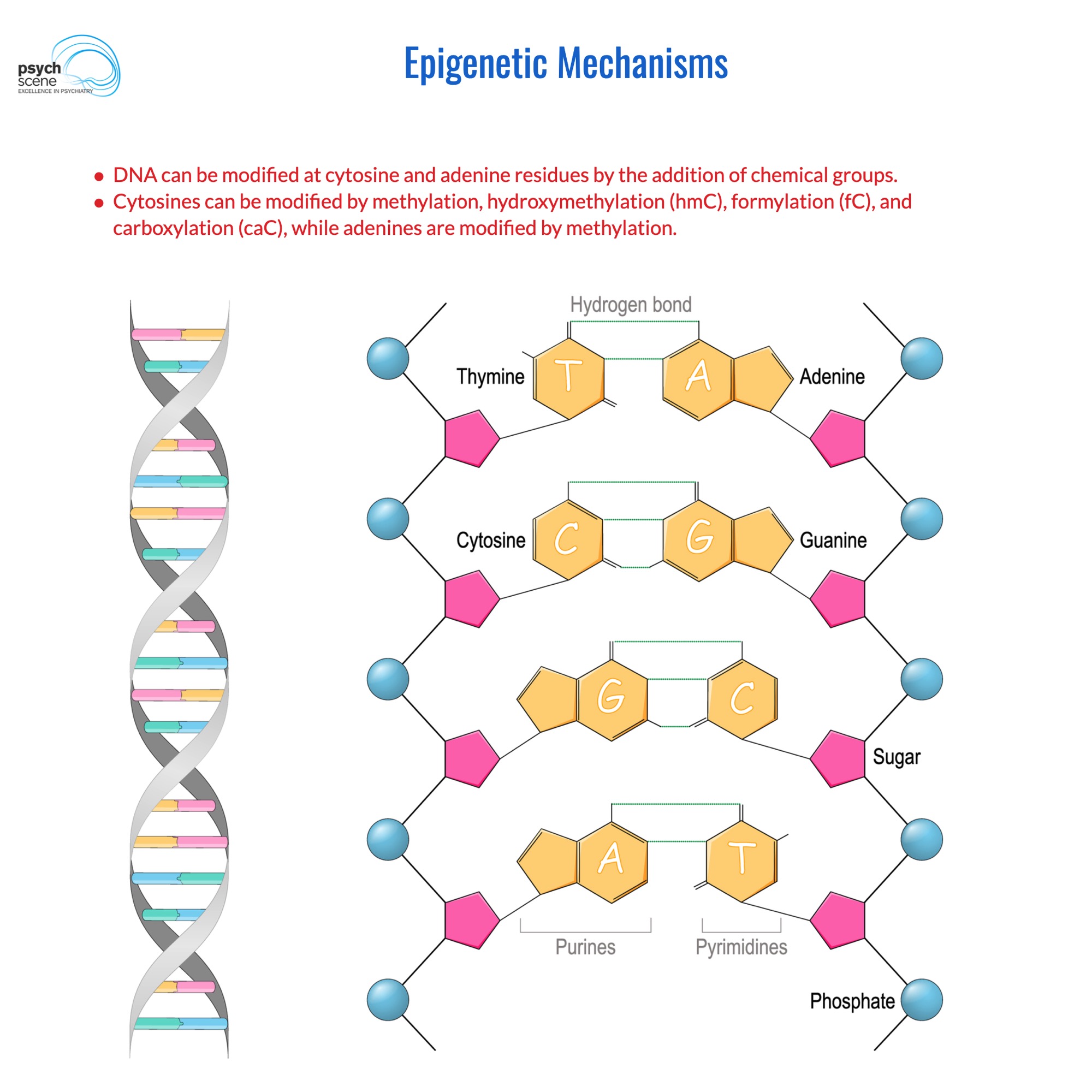 The modifications alter the chromatin structure to influence gene expression. In general, tightly folded chromatin tends to be shut down or not expressed, while more open chromatin is functional or expressed.

Imprinting is the process where one of the two alleles (variants of a gene) of a typical gene pair is silenced by an epigenetic process such as methylation or acetylation. This becomes a problem if the expressed allele is damaged or contains a variant that increases the organism’s vulnerability to microbes, toxic agents, or other harmful substances.

There is growing evidence of the role epigenetics may play in the etiopathogenesis of psychiatric disorders.[Ptak, 2010]

Research suggests that this is mediated by disease-associated modifications that induce stable and lasting changes in gene expression, then over time, can contribute to the pathophysiology of psychiatric disorders.

There is a high degree of co-morbidity between stress and depression, with depressive-like behaviours putatively linked to changes in brain-derived-neurotrophic factor (BDNF) expression.[Brunoni A et al., 2008]

For example, there is a reduction in BDNF expression in response to stress in the hippocampus, hypothesised to be mediated via epigenetic mechanisms.

BDNF is a pro-survival factor that has been observed to have antidepressant efficacy, particularly through its effect on limbic circuits—this forms the basis of the neurotrophic hypothesis of depression.[Duman & Monteggia, 2006]

Human studies have also shown that BDNF expression levels play a therapeutic role in the efficacy of antidepressants.[Castrén & Rantamäki, 2010]

More recently, the TRKB receptor, which is a receptor for BDNF, is the main receptor binding site for the mechanism of antidepressants. [Casarotto et al., 2020]

Gene-environment interactions between the 5-HTTLPR variant and stressful life events influence the risk of developing depression among subjects with one or both short alleles of the 5-HTTLPR variant in a prospective longitudinal study of Dunedin children. Individuals with one or two copies of the short allele of the 5-HTT promoter polymorphism exhibited more depressive symptoms, diagnosable depression, and suicidality in relation to stressful life events than individuals homozygous for the long allele. [Caspi et al., 2003]

Therefore, chronic stress can mediate long-lasting genomic changes (e.g. histone modifications and DNA methylation) that may underlie the aetiology of depression. Overall, the research suggests that the epigenetic regulation of the BDNF gene shapes an individual’s response to environmental stimuli, stress, and even their response to antidepressant treatments.

There have been many recent advances in determining the epigenetic changes associated with major psychosis, including schizophrenia and bipolar disorder.[Fusar-Poli P et al., 2013]

Epigenetic modulations appear to play a significant role in major psychoses. Although they have been confirmed in schizophrenia patients [Muntjewerff M et al., 2006] as well in their mothers during pregnancy [Brown A et al., 2007], there are inconsistencies in the data.

The main epigenetic mechanisms are:

Overall, disorders such as schizophrenia and bipolar disorder are phenotypically and genotypically diverse, and therefore, more research is required to determine epigenetic biomarkers for diagnostic purposes in major psychoses.

Furthermore, many studies have also shown that chronic drug abuse can perturb the chromatin structure and affect expression levels of some genes (i.e. FosB, Cdk5, and BDNF).[Biliński P et al.,  2012]

These changes may have several influences on behaviour, including changing the behavioural response to a drug, initiating drug continuation and dependence, developing drug tolerance, or predisposing an individual to cycles of withdrawal and relapse.

Read more on the neurobiology of addiction.

There is increasing evidence that epigenetics may play a role in the pathophysiology of psychiatric disorders such as major depressive disorder, psychosis and addiction.

Epigenetic changes occur in response to environmental changes but may also be heritable, which modify genetic expression directly and indirectly.

What Do You Mean, “Epigenetic”?

Epigenetic regulation of gene expression: how the genome integrates intrinsic and environmental signals

Jaenisch R and Bird A. Epigenetic regulation of gene expression: how the genome integrates intrinsic and environmental signals. Nat Genet. 2003;33:245-254.

Biological embedding of experience: A primer on epigenetics.

Epigenetic regulation and chromatin remodeling in learning and memory

Induction of epigenetic alterations by dietary and other environmental factors

Stochastic epigenetic variation as a driving force of development, evolutionary adaptation, and disease

Feinberg A and Irizarry R. Stochastic epigenetic variation as a driving force of development, evolutionary adaptation, and disease. PNAS. 2010;107(Suppl 1):1757-1764.

A systematic review and meta-analysis of clinical studies on major depression and BDNF levels: implications for the role of neuroplasticity in depression

Brunoni A et al., A systematic review and meta-analysis of clinical studies on major depression and BDNF levels: implications for the role of neuroplasticity in depression. Int J Neuropsychopharmacol. 2008;11(8):1169-1180.

The role of BDNF and its receptors in depression and antidepressant drug action: Reactivation of developmental plasticity

Castrén E and Rantamäki T. The role of BDNF and its receptors in depression and antidepressant drug action: Reactivation of developmental plasticity. Dev Neurobiol. 2010;70(5):289-297.

The potential use of histone deacetylase inhibitors in the treatment of depression. Prog Neuropsychopharmacol Biol Psychiatry.

Influence of life stress on depression: moderation by a polymorphism in the 5-HTT gene

Homocysteine, methylenetetrahydrofolate reductase and risk of schizophrenia: a meta-analysis.

Elevated prenatal homocysteine levels as a risk factor for schizophrenia

Methylomic changes during conversion to psychosis

Epigenetic mechanisms in schizophrenia and other psychotic disorders: a systematic review of empirical human findings