Depression affects up to 350 million people around the world, but response rates to a first-line antidepressant can be as low as 50%. [WHO, 2015]

With persistent and vigorous treatment, most patients will enter remission: about 33% after one step, 50% after two steps, 60% after three steps, and 70% after four steps (assuming patients stay in treatment)

In this article, we summarise the recently published RANZCP guidelines which provide the most up to date guidance on ECT. [Weiss A et al., 2019]

Factors influencing the choice of ECT as a treatment approach:

Neuroimaging shows that the seizures increase the rate of neurogenesis and synaptogenesis in the hippocampus and the subgenual anterior cingulate cortex. [Liu Y et al., 2015]

However, there are many inconsistent findings with much of the data often contradictory. Differences in research methodologies and study populations mean that it is difficult to confirm the precise mechanisms that underpin the therapeutic effects of ECT.

EFFICACY AND RESPONSE RATE OF ECT

The response rate to unilateral ECT patients with melancholic psychotic depression who have failed one or more medication trials are as high as 48%. [Prudic J et al., 1996]

A recent meta-analysis found remission rates with ECT of 48% for medication-refractory patients compared to 64.9% for patients who have not received pharmacological treatment.  [Heijnen W et al., 2010]

In another study, patients were randomly assigned to BF, BT or RUL. Remission was reported to be similar: 61% with BF, 64% with BT, and 55% with RUL electrode placements. These remission rates were not affected by the presence of psychosis, the polarity of depressive illness, or severity of HAMD24 scores. [Kellner C et al., 2010]

ECT can reduce a high HAMD24 score for suicidal thoughts, actions, or gestures in 15% of patients after one ECT session, in 38% after three sessions, in 61% after six sessions, and 76% after nine sessions. [Kellner C et al., 2005]

ECT has the same effect on patients regardless of whether the patient is diagnosed with either unipolar depression or bipolar depression (78% vs 80%, respectively). [Bailine S et al., 2010]

ECT may augment antipsychotic response in individuals with schizophrenia who have an inadequate response to antipsychotic medication. ECT, in combination with antipsychotics, may be effective for acute positive symptoms.

Depressive symptoms in schizophrenia may respond to ECT.

There is no evidence of negative symptom response to ECT.  The cognitive side effects are consistent with treatment in depression.

One study suggests that bifrontal ECT may be as effective or more effective than bitemporal ECT in people with schizophrenia with the added benefit of causing less cognitive impairment. [Phutane et al., 2013]

The key considerations in ECT administration are the following: 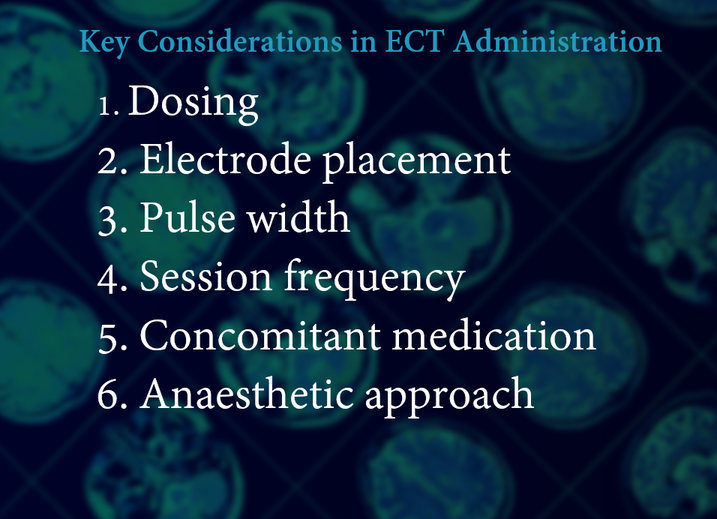 The seizure threshold is the lowest electrical dose, which elicits seizure activity as seen on EEG or visible motor movement.

The three methods commonly used to estimate the seizure threshold are:

The recommendation is that the stimulus should be determined on an individualised basis using a dose-titration method. 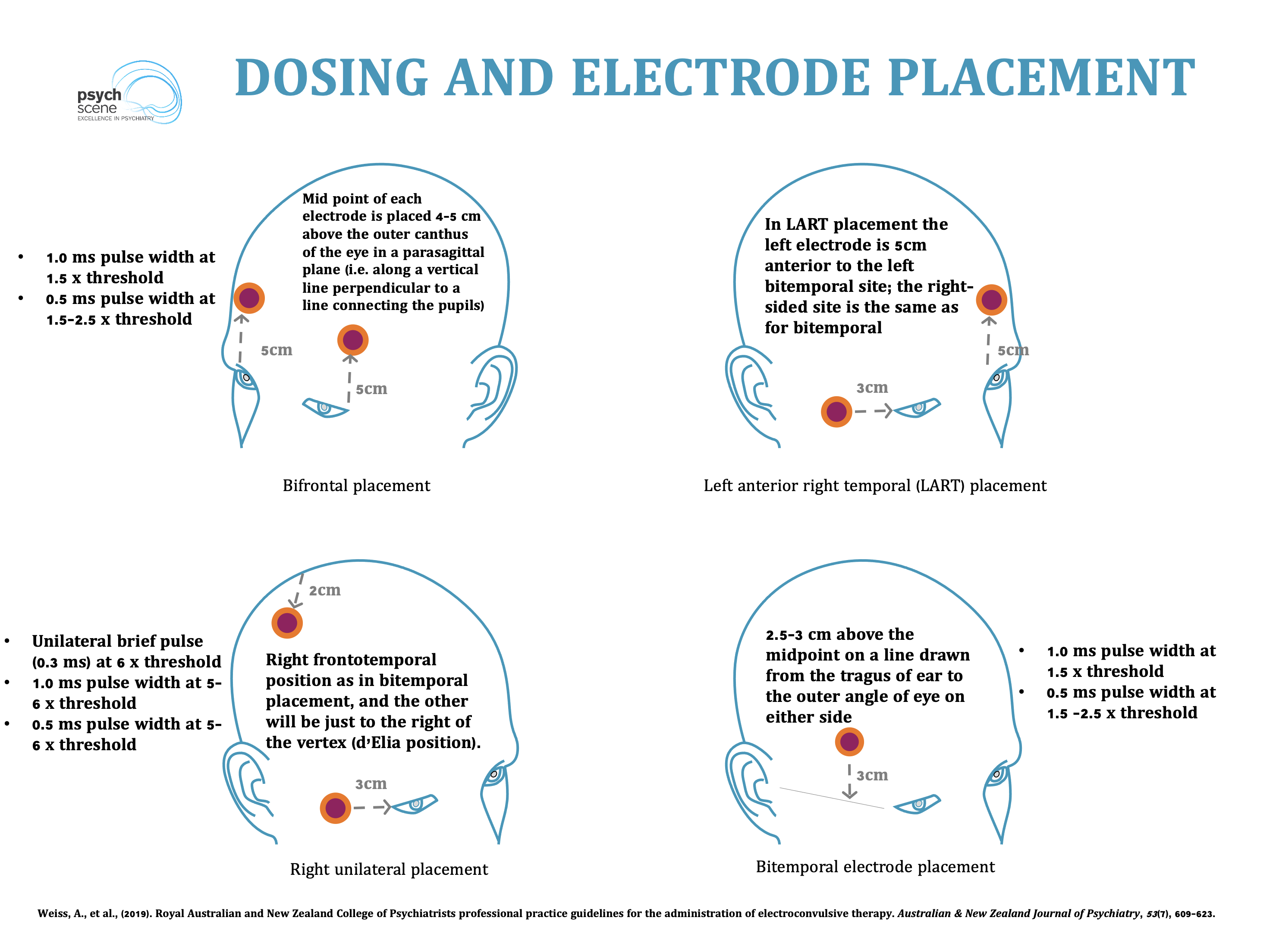 Ketamine has been used as an anaesthetic or in combination with remifentanil, thiopentone or propofol.  It has less effect on the seizure threshold, thereby enabling lower ECT stimulus dose to be administered.

If ketamine is used, it may prolong recovery time and may be associated with dissociative side effects, hallucinations or illusions.  Side effects of repeated dosing in ketamine also need to be monitored such as cystitis, LFT abnormalities, dependency and dissociative symptoms.

Appropriate standards and recommendations are documented in relevant Australian and New Zealand College of Anaesthetists (ANZCA) professional practice documents including: PS04 Recommendations for the Post-Anaesthesia Recovery Room; PS08 Statement on the Assistant for the Anaesthetist; PS09 Guidelines on Sedation and/or Analgesia for Diagnostic and Interventional Medical, Dental or Surgical Procedures; and PS55 Recommendations on Minimum Facilities for Safe Administration of Anaesthesia in Operating Suites and Other Anaesthetising Locations. 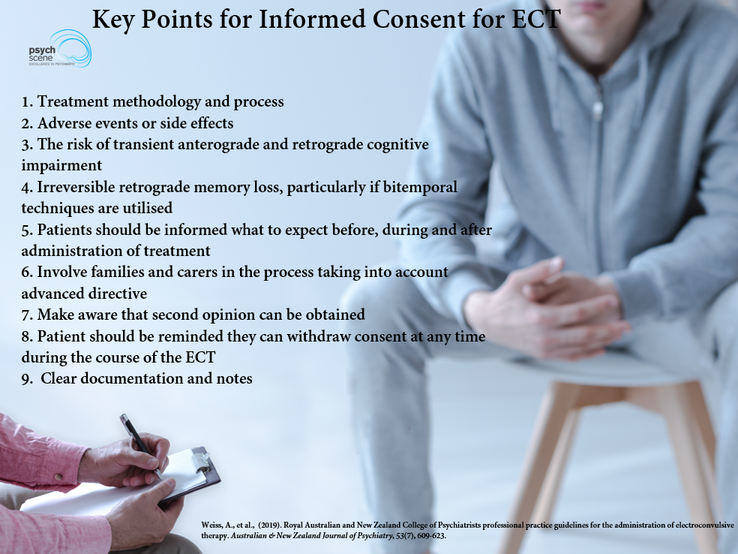 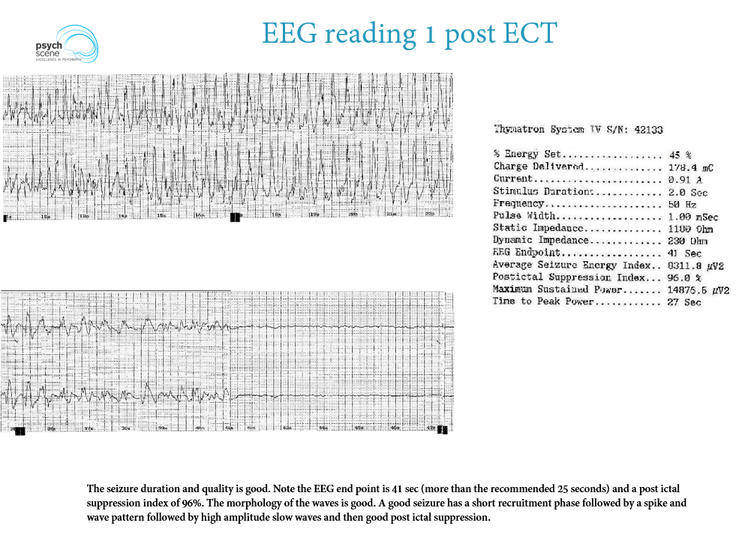 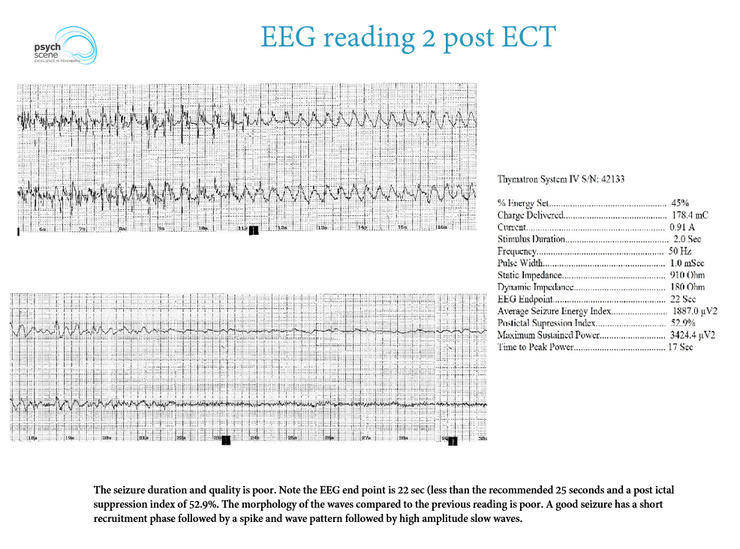 Causes of poor quality of seizures:

EEG quality and cognitive side effects are the two main aspects to be monitored.

Weekly review to monitor progress and cognitive side effects.

A second opinion from a psychiatrist is recommended if more than 12 treatments required in an acute course.

MAINTENANCE AND CONTINUATION OF ECT

Following a course of ECT, relapse rates within 12 months have been shown to be about 50% with the majority relapsing within the first six months despite maintenance pharmacotherapy or ECT. [Jelovac A et al., 2013] 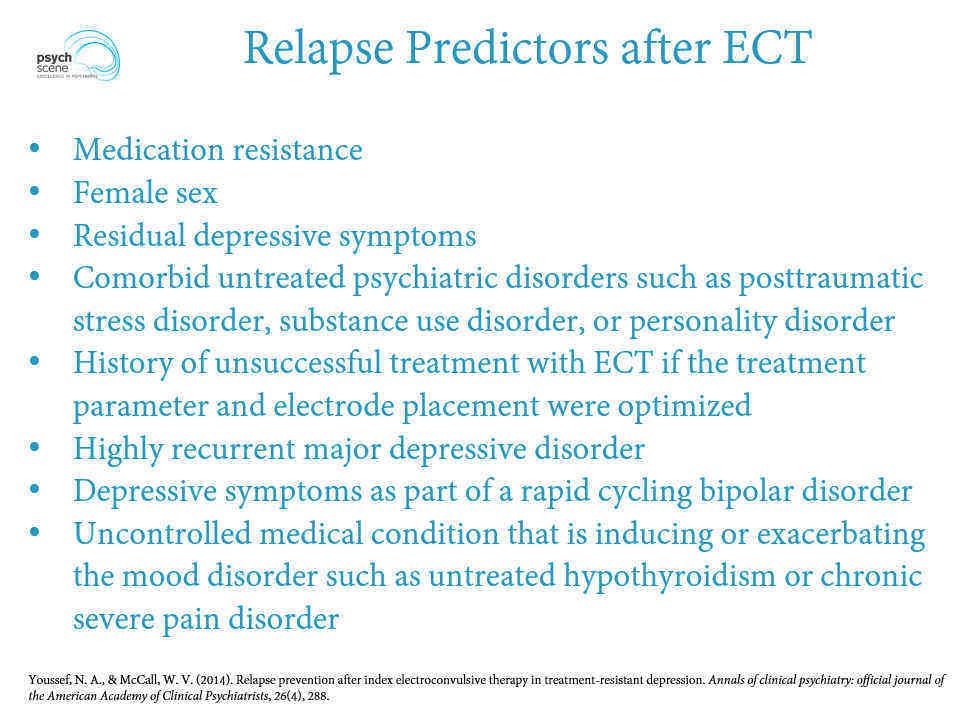 To assist with reducing relapse, tapering of an index course of treatment is important as opposed to abruptly ceasing treatment.

In some cases, patients may require ongoing continuous maintenance ECT.  Continuation ECT consists of further treatment given in the first six months, for example, ECT given every week for three to four weeks or less often.

Current literature suggests that combined continuation ECT and pharmacotherapy is more effective than either alone in preventing relapse. 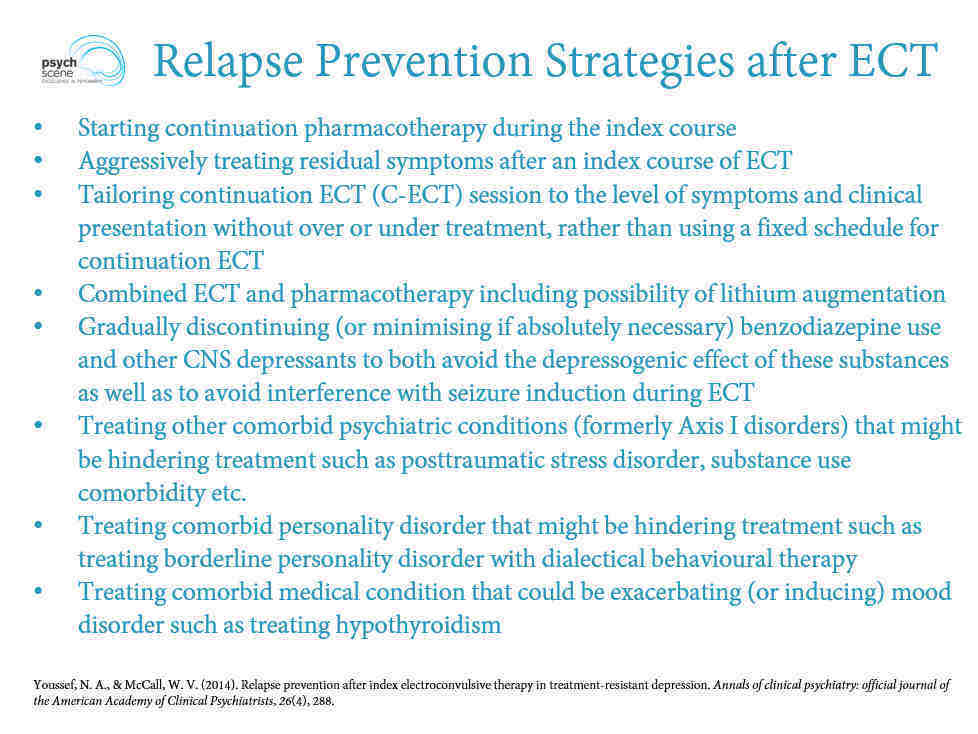 SIDE EFFECTS AND CONTRAINDICATIONS

ECT can cause retrograde and anterograde amnesia that can be persistent.

It is also possible that long-term autobiographical memory impairment may persist permanently  [Sackeim et al., 2007]. Patients should be advised that some people have significant cognitive side-effects after a course of ECT. This should be taken into account in terms of any plans to make major life decisions, and the ability to drive, particularly in the first month after ECT.

The use of bifrontal ECT is increasing and has a better side effect profile than BT ECT.

Techniques to reduce cognitive side effects

Monitoring of Cognitive side effects:

WHAT TO TELL PATIENTS AND FAMILIES ABOUT COGNITIVE SIDE EFFECTS OF ECT?

A committee of academic experts from Australia and New Zealand provided the following list of points to discuss with patients and families with regards to cognitive side effects. [Porter et al, 2022].

Consideration for ECT should include the severity of illness, patient factors, informed consent and side effects.

It is astonishing that, after more than 80 years, no other treatment for depression has been developed that is the equivalent of ECT. Despite this, ECT is difficult to access because of a combination of factors, including limited availability, lack of professional training in modern ECT techniques, misinformation campaigns, stigma and genuine concerns about effects on cognition. Another issue is that, like many effective medical treatments, the precise mechanism of ECT is not yet fully unravelled. Preclinical (including sham-controlled rodent and primate studies) and translational research increasingly support a central role for neuroplastic mechanisms in ECT. [Kirov et al., 2021]

Rush A et al., Acute and longer-term outcomes in depressed outpatients requiring one or several treatment steps: a STAR*D report. Am J Psychiatry 2006.

Efficacy of ECT in depression: a meta-analytic review.

Pharmacological strategies in the prevention of relapse after electroconvulsive therapy.

Relief of expressed suicidal intent by ECT: a Consortium for Research in ECT Study

Electroconvulsive therapy is equally effective in unipolar and bipolar depression.

The cognitive effects of electroconvulsive therapy in community settings

Cognitive side-effects of electroconvulsive therapy: what are they, how to monitor them and what to tell patients.