Antidepressants are widely used treatments for major depressive disorder. However, there is considerable debate on their effectiveness because their short-term benefits are modest and the long-term benefits and harms are under-researched.

In 1998, Irving Kirsch published a meta-analysis of 19 placebo-controlled double-blind clinical trials [1]. In this publication, the mean change in depressive scores was compared between placebo and antidepressant. Here, it was shown that the placebo response was calculated to be responsible for 75% of the response to active antidepressant medication. [1]

This article reached a controversial conclusion, and the methodology was criticised, whereby the analysis was subject to significant clinical, methodological and statistical heterogeneity. [2]

However, in 2008, Kirsch repeated his work using a different set of clinical trials by requesting the FDA to divulge unpublished research from pharmaceutical companies [3]. In this data set, the placebo response was shown to be responsible for 82% of the response observed with antidepressant therapy.

Drug–placebo differences in antidepressant efficacy increase as a function of baseline severity, but are relatively small even for severely depressed patients. The relationship between initial severity and antidepressant efficacy is attributable to decreased responsiveness to placebo among very severely depressed patients, rather than to increased responsiveness to medication (Kirsch et al 2008).

Fournier and colleagues then supported the observation that antidepressants show a magnitude of benefit only for cases of severe depression (HDRS>25). [4]

The magnitude of benefit of antidepressant medication compared with placebo increases with severity of depression symptoms and may be minimal or nonexistent, on average, in patients with mild or moderate symptoms. For patients with very severe depression, the benefit of medications over placebo is substantial.

The efficacy of antidepressants has therefore been debated for at least a decade.

In February 2018, a systematic review and network meta-analysis was published by Cipriani and colleagues, which compared the efficacy and acceptability of antidepressants to treat major depressive disorder. [5]

Systematic reviews and meta-analyses of Randomised controlled trials (RCT’s) lie at the top of the hierarchy of evidence-based medicine and are essential tools in highlighting the effectiveness of interventions.  You can view a video about how to appraise a systematic review and meta-analysis.

The purposes of a meta-analysis are:

Chalmers who was instrumental in the development of meta-analysis in 1988 highlighted the importance of meta-analyses that later led to the change in practice towards anticoagulation in patients with acute MI. [6]

An example of a strongly positive effect in a meta-analysis is the use of intravenous streptokinase for patients with acute myocardial infarction. The saving of lives had been demonstrated in small studies for at least five years before it was confirmed by the very large study known as GISSI.

It is also of interest that intravenous streptokinase is rarely used in the United States, in contrast to lidocaine. I guess the reason is that doctors do not like to see their patients bleed and they do like to see arrhythmias disappear as a result of something they did.

They are unable to notice that in the former case they are saving the lives of one to two additional patients out of every 100 admitted for an acute myocardial infarction, and possibly losing one or two in the latter case. The individual practitioner cannot notice that kind of reduction or increase in death rate. So that is the usefulness of meta-analysis. (Chalmers, 1988)

NMA’s and MTC’s have been introduced to facilitate indirect comparisons of multiple interventions that have not been studied in head to head studies. 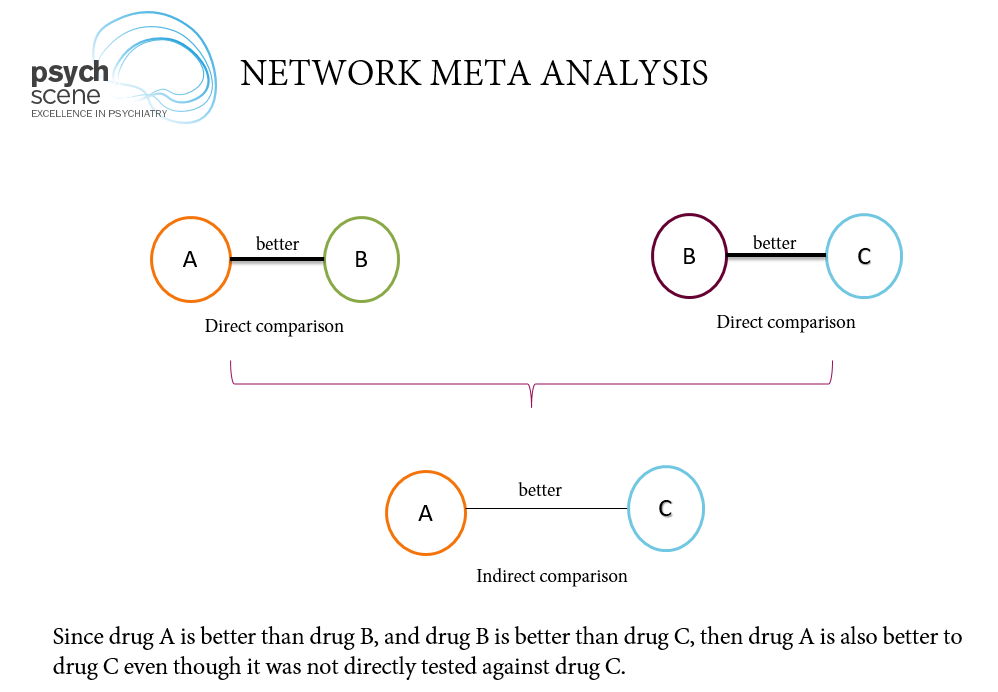 They are useful for the following reasons:

NMA’s, however, are based on certain assumptions that should be taken into account when interpreting the results.

The electronic database searches were supplemented with manual searches (e.g in in ClinicalTrials.gov) for published, unpublished, and ongoing RCTs in international trial registers, websites of drug approval agencies, and key scientific journals in the field.

The researchers contacted all the pharmaceutical companies marketing antidepressants and asked for supplemental unpublished information about both premarketing and post-marketing studies, with a specific focus on second-generation antidepressants.

They also contacted study authors and drug manufacturers to supplement incomplete reports of the original papers or provide data for unpublished studies.

The above search strategy was employed to redcue the risk of publication bias which is a signficant source of bias in meta-analyses.

All second-generation antidepressants that are currently approved in the USA, Europe and Japan, were included:

Know more about the above antidepressants.

This systematic review and network meta-analysis aimed to evaluate the effectiveness and acceptability of individual drugs and compare them with placebo or another active antidepressant for the treatment of major depressive disorder.

A summary odds ratio is a commonly used index to determine the size of effect of disease risk in epidemiological studies.

An odds ratio value is often accompanied by a corresponding qualitative descriptor such as the standardised mean difference (SMD) to allow readers to understand the strength of the association being calculated.

To further put this into context, the SMD (or Cohen’s d) is the power calculation that gives the size effect between two groups.

WHAT ARE THE FINDINGS? 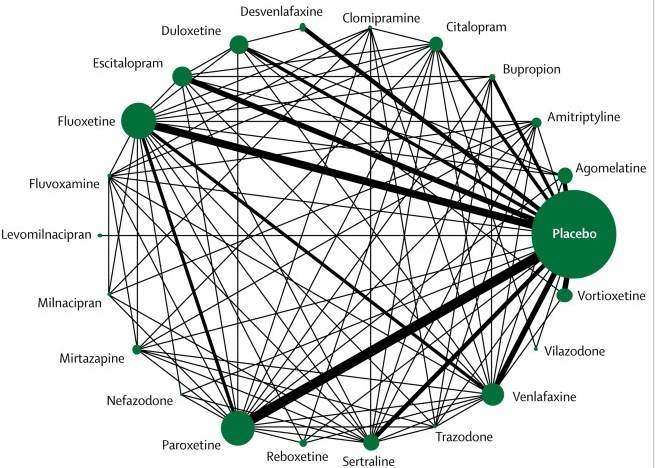 The width of the lines is proportional to the number of studies carried out comparing the two treatments. Fluoxetine and Paroxetine have the most studies compared against placebo. The size of the circles is reflective of participants in the trials. Thus placebo has the highest number of participants in trials. 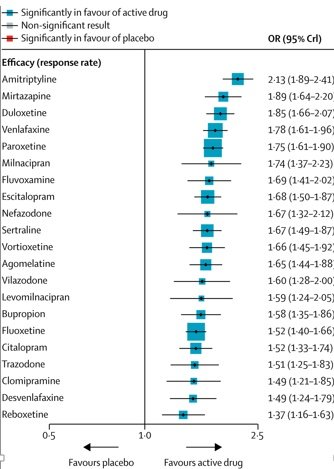 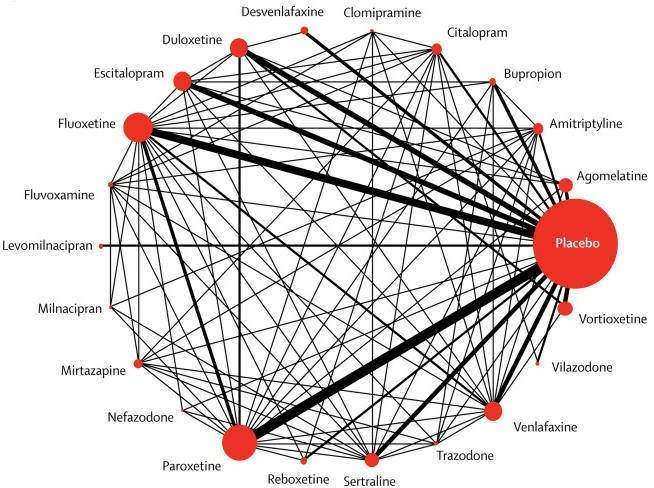 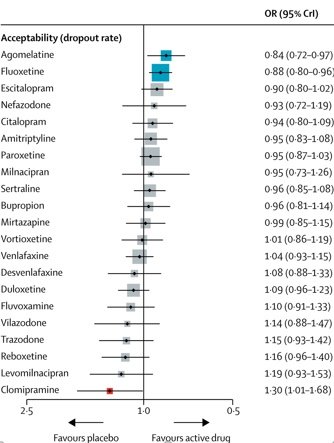 Results from head to head studies

1.Effect sizes were smaller in more recent and larger placebo-controlled trials than in older and smaller ones which may be an indicator of bias.

Estimated differences between drugs were smaller in placebo-controlled trials than in head-to-head studies. There are several potential explanations, as many factors have been associated with higher placebo response rates, such as randomisation ratio and the expectation of receiving an active treatment, the therapeutic setting, or the frequency of study visits.

In our dataset, we found that response to the same antidepressant was on average smaller and dropouts more likely to occur in placebo controlled trials than in head-to-head studies. Moreover, for the same drug and the same probability of receiving placebo, larger all-cause dropout rates were associated with a lower response to treatment. The use of the last observation carried forward (LOCF) approach for imputing missing outcome data might have affected the estimates of treatment effect.

Depressive symptoms tend to spontaneously improve over time and this phenomenon contributes to the high percentage of placebo responders in antidepressant trials. Patients randomly assigned to the active drug in a double-blind, placebo-controlled trial might leave studies earlier than in head-to-head studies because they might suspect they have been allocated to the placebo group than to the intervention group.

Antidepressants usually take full effect only after weeks of treatment; therefore, participants who dropped out earlier tend to have poorer responses than those who remain on treatment, which are carried forward to the end of the trial by the LOCF analysis. The final result can be an underestimate of the true efficacy of the active drug.

Since the individual trials are randomised controlled trials (RCT’s), critical sources of bias include :

In this NMA, it was reported that pharmaceutical companies sponsored 78% of the studies cited. However, funding by industry was not associated with substantial differences in terms of response or dropout rates.

3. The investigators were not able to evaluate potentially important clinical and demographic modifiers of treatment response at an individual patient level such as age, sex, the severity of symptoms or duration of illness.

4. Patients with treatment-resistant and psychotic depression and with co-morbid severe medical illness were excluded hence the study results are unable to be applied to these clinical groups.

5. Clinically relevant outcomes such as global functioning were not quantified.

6. The trials included are of short duration hence the efficacy, and side effects results cannot be extrapolated to longer time frames.

7. Publication bias may still exist despite the attempts to obtain all published and unpublished evidence as a substantial amount of information is not available to the public.

This NMA represents the largest and most comprehensive evaluation of the efficacy and acceptability of antidepressants in the acute treatment of depression.

The study shows that all antidepressants as a group are more efficacious than placebo in adults with major depressive disorder and the summary effect sizes were modest (0.30).

The results of efficacy and acceptability, however, cannot be generalised to individual clinical subgroups such as treatment-resistant depression, psychotic depression or those with co-morbid severe illness.

The STAR*D trial has previously shown that only 1/3 patients will respond after initial antidepressant depressant treatment and treatment resistance is not uncommon.

Furthermore, there is substantial heterogeneity in the mechanisms of actions of AD’s which impact efficacy and tolerability.

It is thus vital for clinicians to ‘match’ the antidepressant with the respective clinical features and aim to minimise side effects by adopting a shared decision-making model.

The following articles should be read in conjunction with this NMA to inform best clinical practice: Mechanism of action of the 21 antidepressants in this study and the RANZCP depression management guidelines.

1. Listening to Prozac but hearing Placebo: A meta-analysis of antidepressant medication.

Kirsch I and Sapirstein G. Listening to Prozac but hearing Placebo: A meta-analysis of antidepressant medication. Prevention and Treatment.

2. Listening to meta-analysis but hearing bias. Prevention and Treatment.

3. Initial severity and antidepressant benefits: A meta-analysis of data submitted to the Food and Drug Administration

Kirsch I et al., Initial severity and antidepressant benefits: A meta-analysis of data submitted to the Food and Drug Administration. PLOS Medicine. 2008.

5. Comparative efficacy and acceptability of 21 antidepressant drugs for the acute treatment of adults with major depressive disorder: a systematic review and network meta-analysis

Cipriani A et al., Comparative efficacy and acceptability of 21 antidepressant drugs for the acute treatment of adults with major depressive disorder: a systematic review and network meta-analysis. Lancet. 2018.

7. Selective publication of antidepressant trials and its influence on apparent efficacy.

8. Industry sponsorship and financial conflict of interest in the reporting of clinical trials in psychiatry

Perlis R et al., Industry sponsorship and financial conflict of interest in the reporting of clinical trials in psychiatry. Am J Psy. 2005.