Why Doctors Kill Themselves – Battling The Dark Side of Medicine

A number of recent articles have commented about the mental health of doctors, often after a colleague known to them dies by suicide. I was able to attend a presentation at the 2016 APA by Dr Michael Myers, a Canadian psychiatrist who specialises in treating physicians, with some input from Dr Glen Gabbard. He noted that approximately one doctor in America dies by suicide every day, and I imagine we would have a similar population-adjusted rate in Australia. Dr Myers noted that suicide is an outcome where “several things go wrong at once”. The purpose of passing on this information is to help understand this outcome in doctors better and perhaps assist in its prevention. 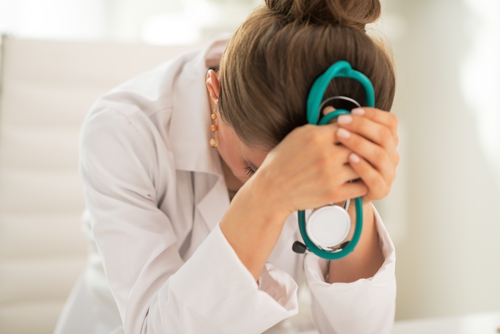 Dr Myers stated that 85-90% of people who die by suicide have a psychiatric illness, treated or not, although this is a matter of controversy. Males suicide more frequently than females, but not in doctors where the ratio is approximately equal. Both genders die by suicide more often than the general population.

The suicide rate ratio for male doctors is 1.41:1 compared with the public, and for female doctors, it is 2.27:1. As expected, the most common illnesses in doctors who suicide include depression and bipolar illness, then substance abuse disorders. Other important diagnoses include a chronic anxiety disorder, post-traumatic stress disorder, underlying borderline or narcissistic personality disorder, burnout, psychotic disorders, and chronic medical illness,

Dr Myers highlighted that stigma, being the judgemental and discriminatory attitudes faced by those with an illness, remains impactful. This may be “enacted stigma”, which refers to the experience of unfair treatment by others, either institutions or individuals. Felt stigma, in contrast, is the suffering and shame associated with an expectation of discrimination that is internally experienced. Both types of stigma increase distress and isolation and contribute to denial.

Practically this may manifest in delaying or resisting seeking treatment and includes the fear of how mandatory notification responsibilities might be acted on by the treating practitioner or institution, with subsequent implications for practice.

There are also concerns about the working environment of many doctors. Dr Myers described the “hidden curriculum” of medicine, including cynicism, indifference and unethical behaviour, very different from that contemplated at medical school.

In some cases frank bullying or abuse exists, including from senior colleagues. Concerns emerge rapidly after entering the medical workforce, with suicidal ideation in interns much higher than baseline after three months. While there is an increasing awareness of such problems, the pressure from the increasing demand for health services, and limited resources, particularly in the public sector seems to hamper meaningful cultural change.

With respect to individual doctors, personality traits conferring vulnerability were highlighted. The inner sense of self-loathing and inadequacy behind narcissism can make a doctor vulnerable when a narcissistic injury occurs, even in the absence of depression, as can impulsivity in a doctor with borderline personality organisation.

Some doctors are highly introverted and emotionally sensitive behind their professional mask. Dr Gabbard discussed perfectionism, describing it as “a response to inner inadequacy and the haunting fear we have of hurting a patient and being found out”. It is often associated with self-doubt, guilt and an exaggerated sense of responsibility.

Many of us feel we are required to show emotional, intellectual and physical powers beyond what we seem to possess. These elements can contribute to burnout; the fatigue, cynicism, professional dissatisfaction and ineffectiveness that can evolve into overt psychiatric disorders.

Many physicians also exhibit the need for high levels of autonomy in their personal life or believe they should be able to fix themselves. Thus they struggle with the role of being a patient, being reluctant to seek the professional help that may challenge that way of being and thinking.

When assessing physicians, the risk factor of previous suicide attempts may be less reliable, as doctors may end their life with the (relative) absence of a prior attempt. Dr Myers highlighted extensive research by doctors into lethal means, perhaps after treating patients who had survived with a permanent disability, and desiring to avoid that outcome for themselves.

Doctors may minimise or deny suicide attempts, requiring empathic persistent questioning if indicated, and the seeking of corroborative information. Detailed enquiry of potential means and method is needed.

Consider also self-prescribing or falsified prescribing for family members. Ask carefully about sleep, as this is often disturbed in suicidal physicians, and allows for unhelpful rumination, as well as impairing work performance.

Specific psychosocial risk factors that may be linked with shame are important. These include recent marital separation, disharmony or divorce, change in professional status, legal action or complaints, and financial stress. They are particularly potent if occurring together.

With respect to voluntary treatment, it is ideal if physicians can be seen as quickly as possible, as the window of openness to accept help may be brief. Alternatively treatment may result from AHPRA notification and subsequent conditions. Physicians tend to prefer individual treatment from one practitioner rather than split treatment if possible. A strong therapeutic alliance can be built

Physicians tend to prefer individual treatment from one practitioner rather than split treatment if possible. A strong therapeutic alliance can be built based on reliability, mutual trust, with a clear awareness of the limitations and responsibilities of both parties.

If hospitalisation is needed it should ideally be in a facility that is not linked to that physician’s practice. Doctor patients may adjust or cease medication themselves, requiring careful monitoring to ensure adequate treatment trials.

The suicide of a doctor, like any individual, is a personal tragedy, with profound effects on family and other loved ones. In considering ways to prevent this outcome, Dr Myers notes that we all have a responsibility to reach out to colleagues who may be struggling and assist them to seek appropriate treatment.

It is crucial that we also take seriously the message we give our patients about living a healthier life. At a minimum, we need our own general practitioner, and to commit to seeking help if we need it.

Systemically, education and targeted advocacy may help reduce stigma, starting in medical school, and continuing throughout our working life. Above all, let’s treat our medical patients with the balance of competence and empathy that they deserve.

As a resource for physician patients, or if any reader is struggling with their own mental health, the Medical Benevolent Association in NSW and the ACT can provide financial assistance and support to doctors and their families for no cost. The Doctors Health Advisory Service is a national body that can also assist, including in organising treatment. Finally, some psychiatrists have extensive experience in treating doctors, and will be known to senior psychiatric colleagues, including those at your state College branch.

The article is an abbreviated version of an article originally published in Mindcafe. Issue 24, September 2016.