There are multiple theories for major depressive disorder (MDD) with no single mechanism likely to be responsible. This is because there are many different clinical variations with overlapping genetic, biochemical, and neurophysiological changes in the brain known to be implicated in MDD.

One prevalent theory is the monoamine oxidase (MAO) theory of depression, which states that there is a lack of monamine neurotransmitters such as serotonin and norepinephrine. This is evidenced by the inhibition of the MAO enzyme by monamine oxidase inhibitors that can help relieve depressive symptoms.

However, as previously stated, genetic factors, stress, psychosocial factors all play a role too. Recent evidence also suggests that nutritional factors also play a role in mental health. Observations show there is a relationship between unhealthy dietary patterns and poorer mental health. There is also likely to be a dietary influence on brain plasticity, gut microbiota, inflammatory processes, and oxidative stress. 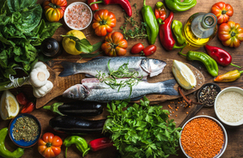 The study by Jacka et al., was a 12-week parallel-group single blind randomised controlled trial investigating the efficacy of a structured dietary support focused on improving diet quality. This study was part of the Supporting the Modification of lifestyle in Lowered Emotional States (SMILES) initiative. [1]

This study included 67 individuals with MDD with patients given either dietary support (n=33) or social support (n=34) for the treatment of severe depression. A clinical dietician provided dietary support with a personalised advice, nutritional counselling, motivational interviewing, goal setting and information on mindful eating. The diet was set at 18% protein, 40% fat, 37% carbohydrates, 3% fibre, and 2% alcohol.

Social support was a befriending protocol and included trained personal discussing news, music sport and other neutral topics of interest to keep participant engaged and happy.

In addition, the dietary support group had greater improvements in HADS-depression and HADS-anxiety scores as well as lower average scores on the CGI-I after 12 weeks than the social support group. However, no significance was observed between the two treatment groups with the POMS total mood disturbances scores or the WHO-5 scores.

This paper describes evidence that improvement of diet is a treatment strategy for MDD with improvements in depressive and anxiety symptoms. This is a useful, affordable and accessible strategy and this is in spite of fatigue or lack of motivation that is common in depressed individuals.

The improvements in depressive symptoms were independent of weight change and therefore the relationship between diet quality and mental health is independent of body composition.

Over three months the MedDiet intervention significantly and substantially improved the diet quality of people with self-reported depression when compared with diet changes in the social group, with higher total Mediterranean diet scores and increased intake of vegetables, fruit, wholegrains, nuts, legumes and greater diversity of vegetables, along with lower intake of unhealthy snacks and meat/chicken.

To enrol participants in this study, the nature of the trial was described in the study advertisement. To mitigate this, researchers tried to put more emphasis on the social support arm. However, subject bias cannot be ruled out as a result.

However, because 94% of the diet group completed the study, this shows that the diet was sustainable, palatable and satiating as originally planned. There is, therefore, evidence that addressing a poor diet in clinical practice is achievable.

When addressing the treatment of patients with mood disorders, healthy diet, exercise, sleep quality, and smoking cessation are all behaviours that need to be considered initially. Therefore, clinical practice should either provide guidance on improving healthy behaviours or include clinical dieticians in multidisciplinary mental health teams.

Improving diet long term will also improve physical health and reduce the burden of physical illnesses that are often co-morbid with depression. Improving diet also comes hand in hand with weight loss and the increased ability to exercise—these have both been shown to assist in improving symptoms of depression.

It is also well established that dietary quality can influence the microbiota of the gastrointestinal system. Species composition and the response of the gut microbiota to dietary change may also impact the association between the gut and the brain.

Read more on the Gut-Brain Axis

Many scientists believe that manipulation of the microbiome is a route for delivering multiple health benefits, metabolically, immunologically, and neurologically.

Overall, this study shows that changes to lifestyle can improve mental health outcomes. The impact of MDD patients changing to a healthy diet to treat their depression appears to be a natural and convenient option to help treat mental disorders.

Want to learn more? Click here to see Prof Felice Jacka talking on the importance of diet quality in children, adolescents and adults.

In this video, Prof Jacka talks about the overall importance of diet, and it’s impact on mental health discussing the SUN cohort study and the Whitehall II study; two important studies investigating the impact of diet on mental health.