Four out of ten women experience premenstrual syndrome (PMS), which describe a cluster of emotional and physical symptoms that occurs during the luteal phase and then abates as menstruation begins. 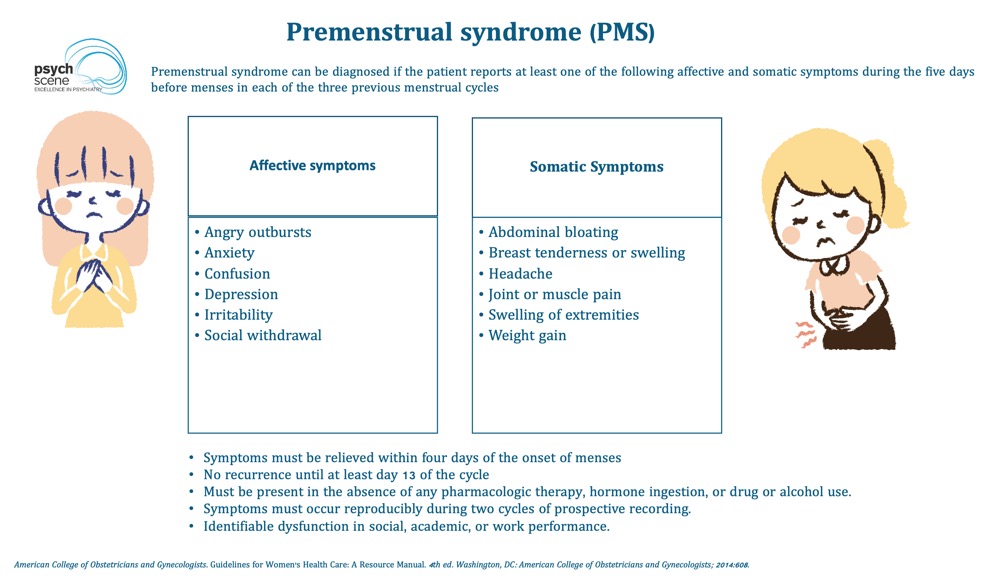 Cyclical changes in sex steroid production are suggested to provoke these symptoms although it remains unclear how these physiological changes are associated with PMS. [Yonkers et al 2008]

PMDD presents as an array of intense cognitive and affective symptoms during the pre-menstruum in females of child-bearing age. [Epperson et al 2012]

PMDD is underdiagnosed often due to it being undifferentiated from PMS; however, PMDD is more intense with greater physical and psychological symptoms that greatly impairs functioning and quality of life. [Malvika and Supriya 2019]

Both PMS and PMDD are part of core premenstrual disorders. (Core PMD).

Smoking, especially in adolescence and young adulthood, may increase the risk of moderate to severe PMS. [Bertone-Johnson et al 2008]

Obesity is strongly associated with PMS although the causal mechanisms are unknown. A complex interaction of hormonal and neurochemical factors are postulated. [Bertone-Johnson et al 2010]

The presence of at least five of the following eleven affective, behavioural, or somatic symptoms that are discreetly associated with the menstrual cycle are required for a positive diagnosis [APA, 2013]: 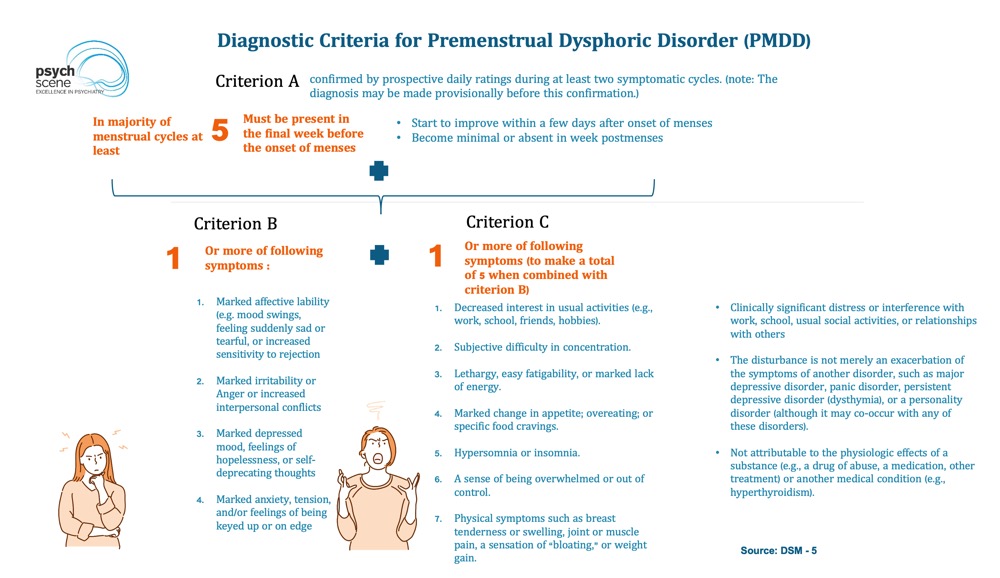 There is a strict set of criteria for PMDD, which states that at least one symptom is mood-related and severe enough to interfere with social, occupational, sexual, or scholastic functioning. In addition, these criteria require confirmation over at least two consecutive menstrual cycles.

AETIOLOGY AND PATHOPHYSIOLOGY OF PMDD

The reduced GABA-A receptor sensitivity to AlloP during the luteal phase and receptor subunit alterations (upregulation of the α4, β, δ subunits) may be responsible for the symptoms of PMS and PMDD. [Schmidt et al 1998]; [Backstrom et al 2011]

In animal studies, progesterone withdrawal leads to upregulation of the α -4 unit of the GABA -A receptor complex and an increased startle response. This ‘startle response’ may be mediated via allopregnanolone which is a positive allosteric modulator of GABA’s action at GABAA receptors. [Pinna G., 2020]

4. Changes in Estrogen and Progesterone: 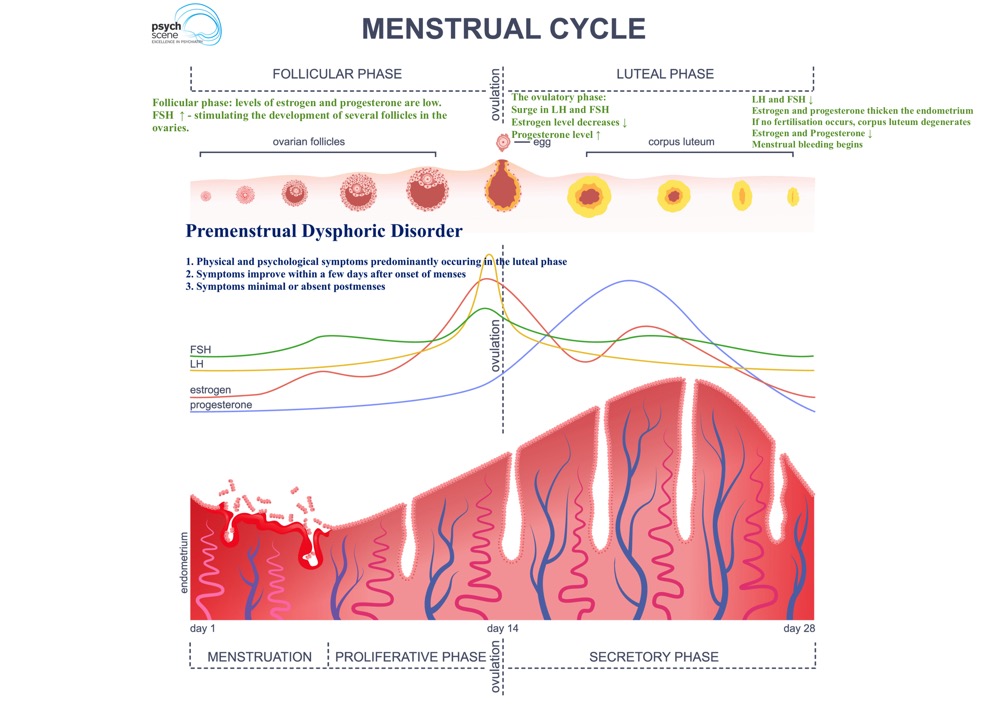 Low-levels of Mg+ in the erythrocytes and leukocytes of women with PMS. [Salamat s et al., 2008]

Alterations in the following have been implicated in the pathogenesis

TOOLS FOR ASSESSMENT OF PMDD

Since the diagnosis of PMDD relies on symptoms during specific phases of the menstrual cycle, it is important that the patient tracks symptoms (type, severity and timing) and their effect on daily life for two consecutive menstrual cycles.

This can be challenging and to assist in the process of data gathering, the following tools have been developed

Daily Record of Severity of Problems (DRSP) is a validated instrument that can be used prospectively for PMDD as well as other menstrual-related mood disorders. [Endicott et al 2006]

6. Prospective Record of impact and Severity of Menstruation (PRISM)

ASSESSMENT AND MANAGEMENT OF PMDD 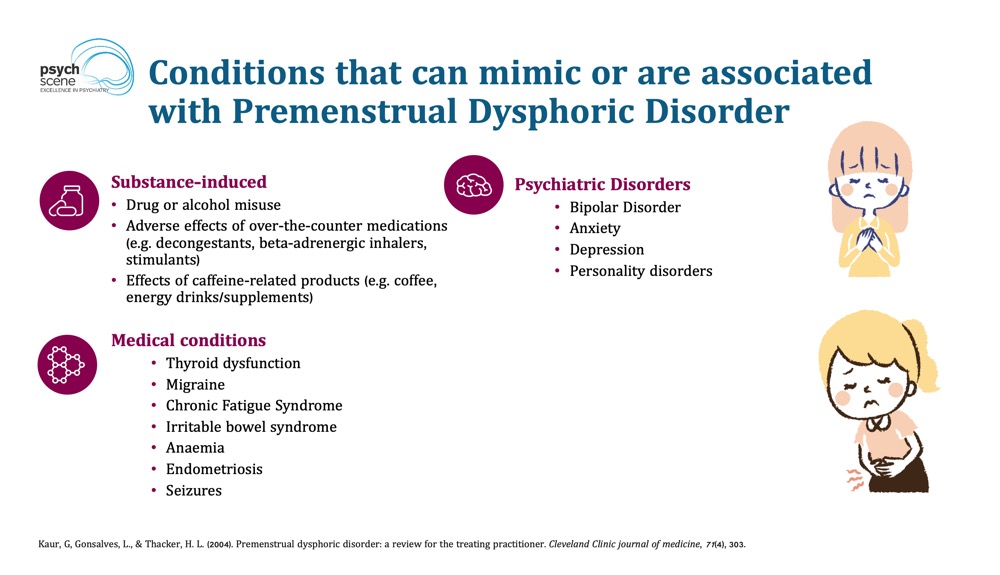 If the patient diary is inconclusive, gonadotrophin-releasing hormone (GnRH) analogues may be administered for 3 months to provide a more definitive diagnosis. [Green L et al., 2016]

Treatment approaches to PMDD include: 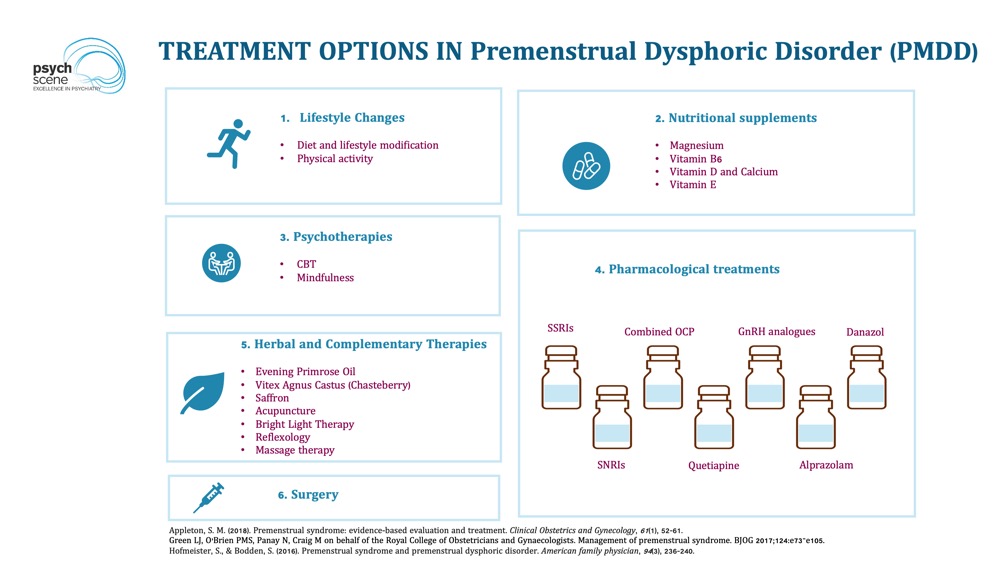 Serotonergic agents have shown to have a benefit on the following symptoms:

Venlafaxine has shown a reduction of psychological and physical symptoms beginning from the first cycle.

Safety of medication during pregnancy should be discussed with the physician and an individual risk-benefit analysis is essential.

A meta-analysis showed CBT is beneficial in improving functioning and depression scores in patients with PMS and PMDD.

CBT should be routinely recommended in women with PMS and PMDD. [Green L et al., 2017]

Lemon Balm, Curcumin and wheat germ have shown some benefit in single studies.

While drospirenone-containing COCs are considered first-line, other agents may also be suitable.

According to the available evidence, although it seems that while drospirenone is a very suitable progestogen to be combined with EE in cases of PMDD and PMS, a similar positive effect can also be obtained using other contraceptive formulations containing different progestogens. [Lete I & Lapuente O., 2016]

Continuous Levonorgestrel/Ethinyl Estradiol (LNG/EE) may reduce the symptoms of PMDD and PMS and, hence, can be considered an option for women who are appropriate candidates for a continuous oral contraceptive for contraceptive purposes.

Surgery should not be contemplated without preoperative use of GnRH analogues as a test of cure and to ensure that HRT is tolerated. [Green et al., 2017]

TREATMENT ALGORITHM FOR PMS AND PMDD

If a diagnosis of PMDD is then indicated, lifestyle changes, psychological therapies, and pharmacologic treatments for both somatic and psychological symptoms are recommended. [Green et al 2017] 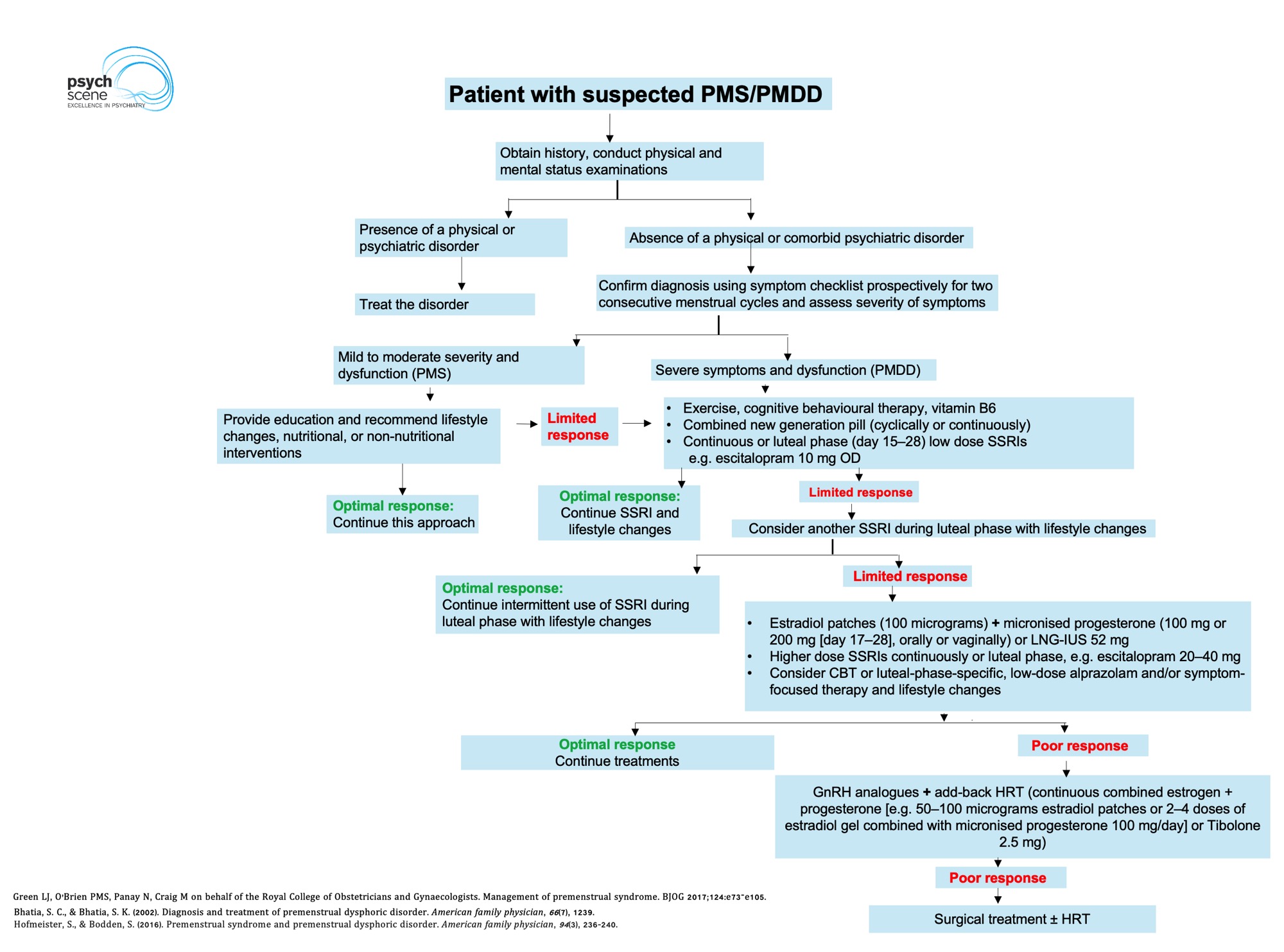 According to Prof Kulkarni from Monash Alfred Psychiatry Research Centre (MAPrc) who is a recognised leader in women’s mental health; her group recommends the following:

PMDD is a severe form of PMS that impairs the functioning and quality of life in females of reproductive age.

The symptoms of PMDD can also overlap with other disorders including MDD, GAD, and thyroid disorder (hyperthyroid or hypothyroid).

Depression and anxiety can co-exist with PMDD as the diagnostic criteria are not mutually exclusive, however, PMDD may predate an MDD or GAD diagnosis.

A careful clinical history with a focus on symptomatology during the luteal phase with remission at the beginning of menses is an important differentiator for diagnosing PMDD.

Premenstrual Dysphoric Disorder: Evidence for a New Category for DSM-5

Premenstrual dysphoric disorder: A review for the treating practitioner

Schmidt P et al., Differential behavioral effects of gonadal steroids in women with and in those without premenstrual syndrome. N Engl J Med. 1998;338(4):209-216.

Early Life Emotional, Physical, and Sexual Abuse and the Development of Premenstrual Syndrome: A Longitudinal Study

Cigarette Smoking and the Development of Premenstrual Syndrome

Adiposity and the Development of Premenstrual Syndrome

Allopregnanolone, the Neuromodulator Turned Therapeutic Agent: Thank You, Next?

Carbone D and Handa R. Sex and stress hormone influences on the expression and activity of brain-derived neurotrophic factor. Neuroscience. 2013;239:295-303.

Early Life Emotional, Physical, and Sexual Abuse and the Development of Premenstrual Syndrome: A Longitudinal Study

Endogenous reproductive hormones and C-reactive protein across the menstrual cycle: the BioCycle Study

Gaskins A et al., Endogenous reproductive hormones and C-reactive protein across the menstrual cycle: the BioCycle Study. Am J Epidemiol. 2012;175(5):423-431.

Are vasomotor symptoms associated with alterations in hemostatic and inflammatory markers? Findings from the Study of Women's Health Across the Nation

Thurston R et al., Are vasomotor symptoms associated with alterations in hemostatic and inflammatory markers? Findings from the Study of Women’s Health Across the Nation. Menopause. 2011;18(10):1044-1051.

Daily Record of Severity of Problems (DRSP): reliability and validity

Selective Serotonin Reuptake Inhibitors and Initial Oral Contraceptives for the Treatment of PMDD: Effective But Not Enough

Halbreich, U. (2008). Selective serotonin reuptake inhibitors and initial oral contraceptives for the treatment of PMDD: effective but not enough. CNS spectrums, 13(7), 566-572.

Effects of GABA active steroids in the female brain with a focus on the premenstrual dysphoric disorder.

Crocus sativus L. (saffron) in the treatment of premenstrual syndrome: a double‐blind, randomised and placebo‐controlled trial

Pilot data on the feasibility and clinical outcomes of a nomegestrol acetate oral contraceptive pill in women with premenstrual dysphoric disorder.