Diagnosis and Management of Obsessive Compulsive Symptoms (OCS) in Schizophrenia

Obsessive-Compulsive Disorder (OCD) and obsessive-compulsive (OC) symptoms frequently coexist with schizophrenia, and both OCD and schizophrenia can occur in the same families. There is often misdiagnosis with severe OCD and confusion occurs with catatonia and movement disorders.

OC symptoms (OCS) are estimated to be present in 14% of patients with schizophrenia.

This article is based on the talk by  Dr Lynne Drummond at the RCPsychIC 2019. Dr Lynne M Drummond currently is Consultant Psychiatrist and Lead Clinician for the National Service for OCD and BDD based at South West London and St George’s NHs Trust. She also has an attachment at St George’s, University of London. Lynne does research in Psychiatry, mainly OCD, Anxiety Disorders, CBT And also on teaching and acquisition of skills. Their most recent publication is a book entitled ” Obsessive-Compulsive Disorders: All you want to know about OCD for those living with OCD, carers and clinicians”

There are phenomenological differences between OCS and delusions which assists in the differentiation of psychosis from OCD, however in some cases this boundary may blur and may result in a misdiagnosis. [Rodriguez C et al., 2010], [Oulis P et al., 2013] 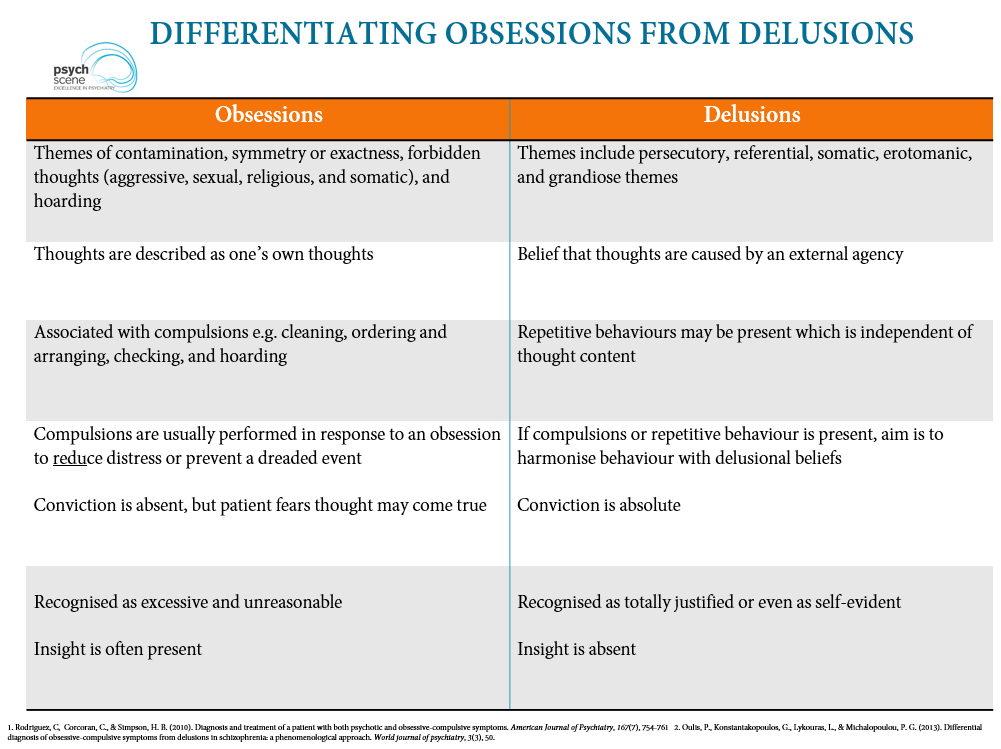 The onset of OCS can occur at different stages of the illness: [Zink M, 2014]

DIFFERENTIAL DIAGNOSES IN PATIENTS PRESENTING WITH OCS AND PSYCHOTIC SYMPTOMS

Differentials in patients presenting with both psychotic and OC symptoms include:

It has been demonstrated that patients with schizophrenia and comorbid OCD have a more severe illness, and the presence of the latter is associated with more severe depression, more impaired social functioning, and also worse premorbid functioning. [de Haan L et al., 2013]

OCS is considered in some cases to be a prodromal stage of schizophrenia due to the temporal occurrence of OCS before schizophrenia.

MECHANISMS OF OCS IN SCHIZOPHRENIA

Some 2nd generation antipsychotics (SGA’s) have a predominantly anti-serotonergic profile with both 5-HT2A and 5-HT2C receptor antagonism, which may precipitate OC symptoms in individuals.

Glutamate is also implicated in the causation of OCD and schizophrenia, and many 2nd-generation antipsychotics also act on the glutamate system. Several studies investigated glutamate in OCD using neuroimaging and found that various areas of the brain in people with OCD appear to be abnormal. (More on the neurobiology of OCD)

One study of 21 unmedicated OCD patients found that CSF glutamate levels were significantly higher in patients with OCD, and these levels were unaffected by gender, age, duration of illness, Y-BOCS score or CGI-S score. [Chakrabarty K et al., 2005]

Both schizophrenia and OCD involve the prefrontal cortex and striatal areas and this may explain the co-occurence.

MANAGEMENT OF OCS IN SCHIZOPHRENIA

There are no clear guidelines for the treatment of OCS in schizophrenia due to the limited evidence base.

The following algorithm has been developed based on the articles by: 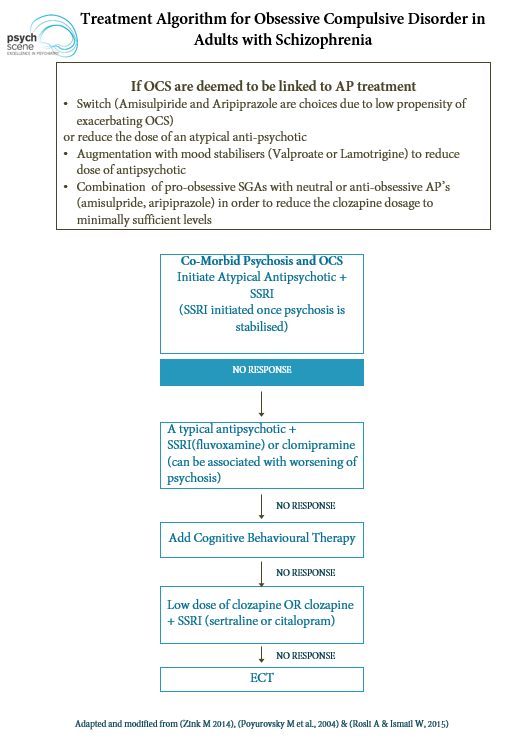 There is evidence to suggest that reducing or stopping clozapine can reduce OC symptoms in around 50% of affected patients, but this may be difficult if clozapine is working for an individual.[Grover S et al., 2015]

Addition of an SSRI can be useful although clomipramine can worsen psychosis and SSRI/clomipramine has also been shown to increase the risk of seizures by altering blood levels of clozapine.

Pharmacokinetic interactions with fluvoxamine can increase blood levels of clozapine (Fluvoxamine is a CYP1A2 inhibitor). For further information regarding pharmacokinetics and mechanisms of antidepressants and antipsychotics.

CBT is safe and does not worsen psychotic symptoms. CBT is effective, with a symptom reduction quite similar to that reported for patients with OCD without psychosis and for SSRI treatment of OCD co-occurring with psychosis.