Long-term use of antidepressants is often necessary; however, there is insufficient clinical evidence for continuing therapy for some patients. [Cruickshank et al., 2008]

Unfortunately, stopping therapy is frequently associated with withdrawal symptoms, and these symptoms can be mistaken for a relapse or recurrence of the underlying disorder. [Fava et al., 2015]; [Davies and Read 2019]

However, a recent systematic review reported that up to 56% of patients would experience withdrawal effects. Of these, almost half (46%; based on four surveys) will regard their symptoms to be severe. [Davies and Read, 2019]. This study specifically recruited participants who had experienced antidepressant withdrawal symptoms, while more rigorous and controlled studies were not included in the review.

Some patients’ withdrawal syndrome may be mild and transient, whereas the reaction to antidepressant withdrawal can be very severe for other patients. It has been reported that although withdrawal generally lasts on average up to 6 weeks, some patients have shown symptoms that last more than a year. [Bhanji et al., 2006] ; [Fava et al. 2007]

In this article, we focus on SSRIs and SNRIs the two groups of antidepressants that are most widely prescribed for depression and are most likely to result in withdrawal symptoms.

The withdrawal syndrome is a cluster of somatic and psychological symptoms that can be indexed according to the Discontinuation Emergent Signs and Symptoms (DESS) checklist.

This self-reported checklist covers 43 symptoms of which the following are some of the more commonly reported: 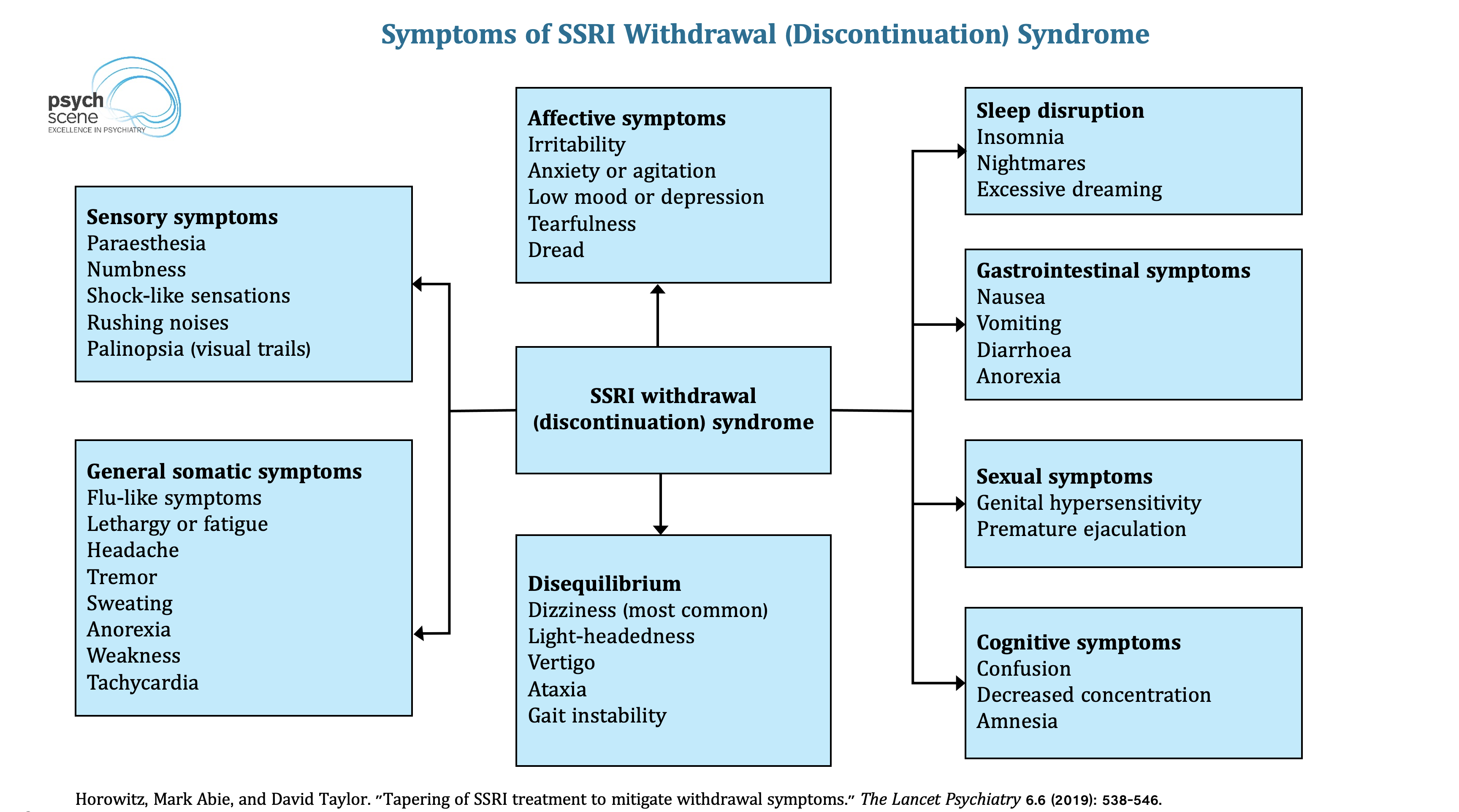 The FINISH acronym is also a useful guide in evaluation. [Berber, 1998]

In addition, the abrupt cessation of TCAs may cause cholinergic-rebound phenomena (flu-like illness, myalgia and abdominal cramps).

To minimise the effects of withdrawal, the APA and NICE recommend tapering doses over several weeks. [APA 2010];[ NICE 2010]

However, the extent of tapering depends on individual patient characteristics and the type of antidepressant and its duration and dose. [Fava et al, 2015];[Bosman et al, 2016] 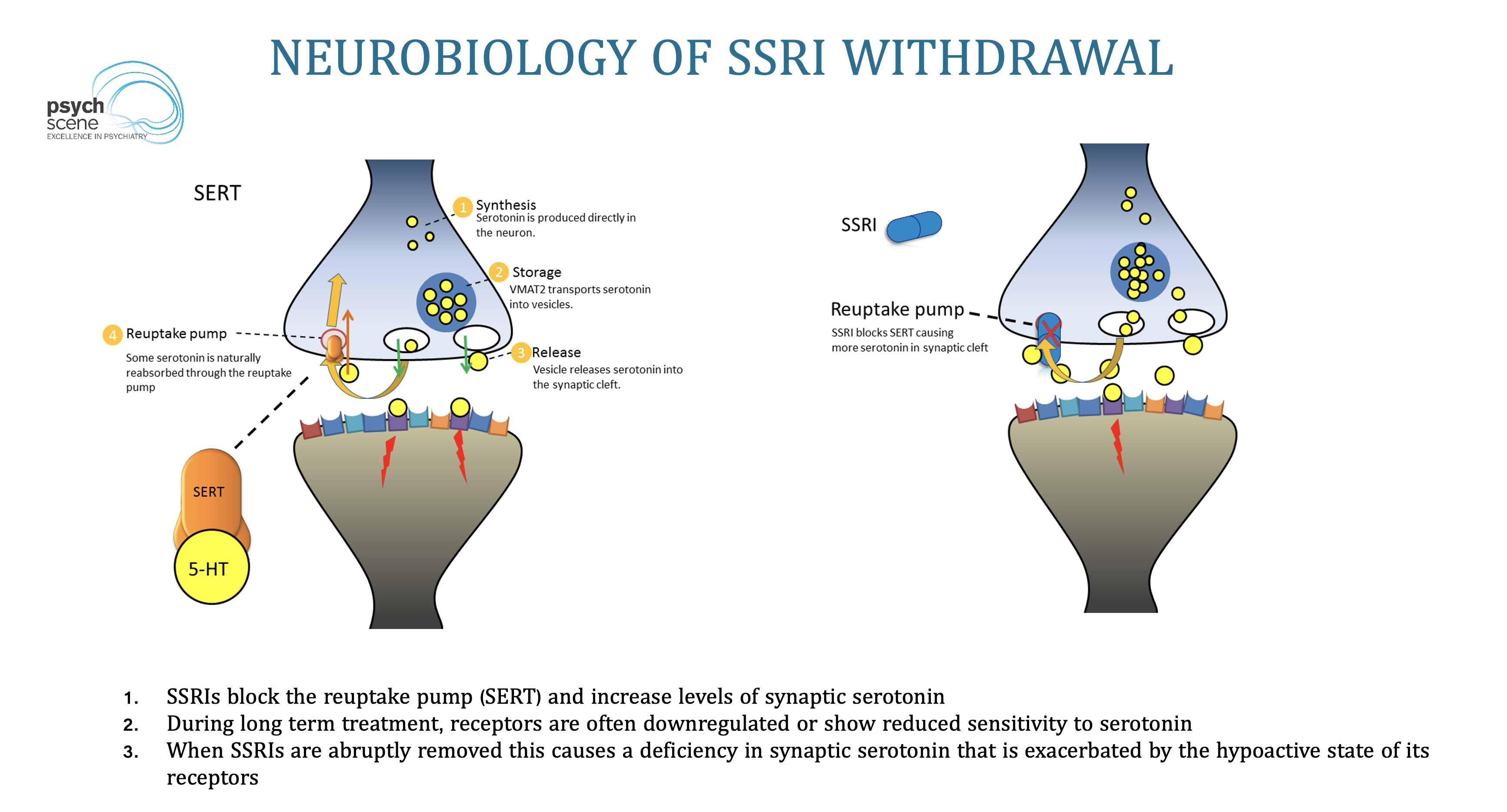 The risk of withdrawal symptoms is higher as the agent’s half-life shortens, particularly when they have been taken at a higher dosage over a longer period. Besides, there are class–specific effects based on receptor activity. For instance, tricyclic antidepressants have strong anticholinergic effects, and therefore withdrawal can be exacerbated by cholinergic–related symptoms (i.e. parkinsonism).

Symptoms in B must persist longer than 6 weeks after drug discontinuation, and are characterized by two of the following criteria:

MANAGEMENT OF SSRI OR SNRI WITHDRAWAL

Clinicians should aim to choose antidepressants with a favourable risk-benefit ratio in the treatment of depression. 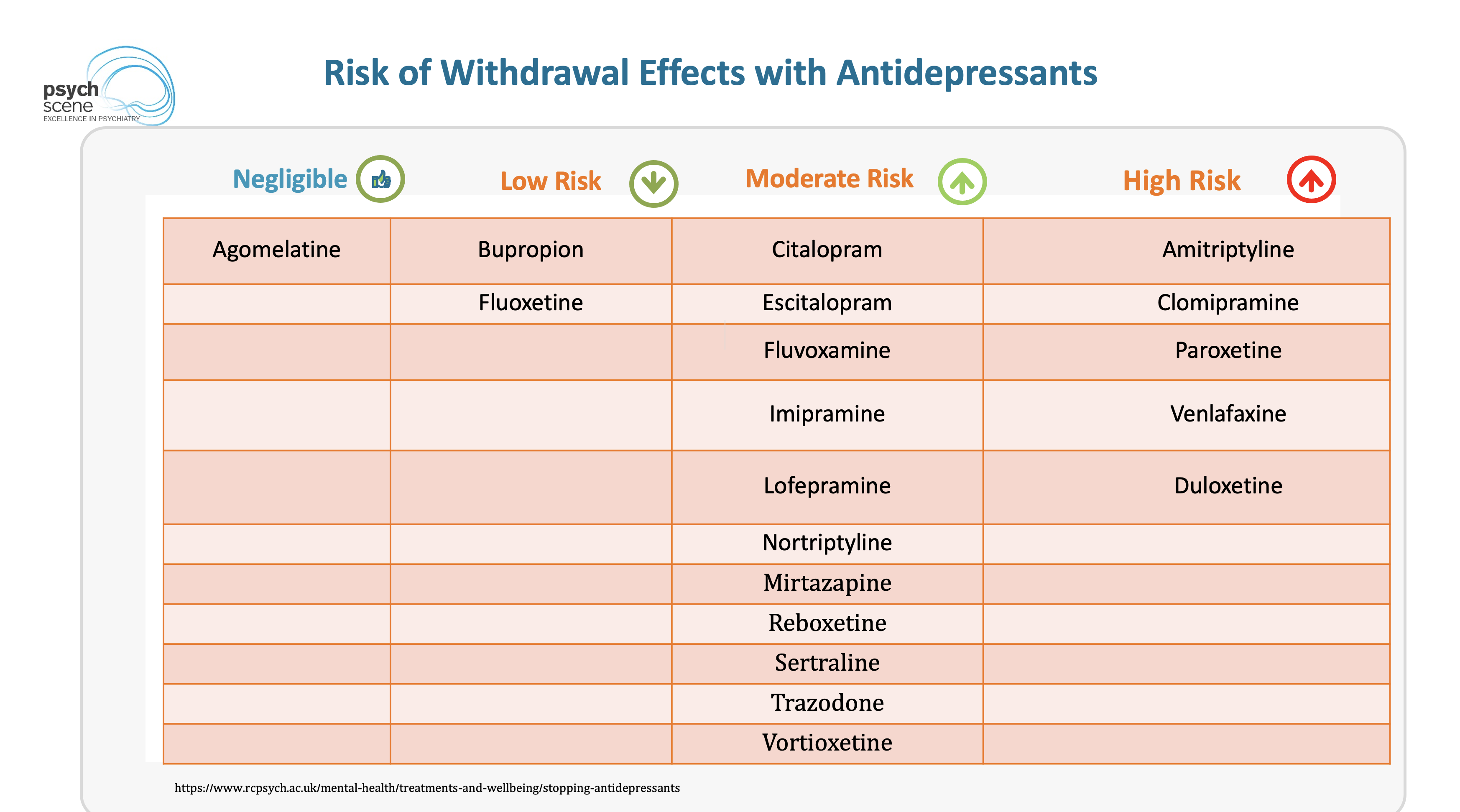 It is generally recommended that patients should stop their antidepressant medication after they have been in remission for around 9 months to a year. Following ceasing medication, many patients will remain depression-free, but some may have a depressive relapse and up to 40% may experience discontinuation or withdrawal symptoms.

At present, most guidelines recommend that tapering is linear until the minimum effective dose for the relevant antidepressant is achieved.

For example, fluoxetine can be safely reduced over the course of just 2 weeks, whereas paroxetine requires a reduction of 5 mg every 2 to 4 weeks to prevent discontinuation symptoms. [Himei and Okamura 2006]

It is also important to note that for paroxetine, withdrawal symptoms can appear within 2 days compared to the 2 to 6 weeks it can take for fluoxetine withdrawal symptoms to appear. [Zajecka et al. 1998] ; [Fava et al. 2015] However, factors such as age, genetics, and the effect on specific CYP enzymes can dramatically change the pharmacokinetics of each drug. [Preskorn 1997]

A PET study in 2004 by Meyer and colleagues showed that the binding potential of citalopram to SERT is proportional to receptor density and that the dose-response curve is hyperbolic. [Meyer et al. 2004]

A recent review nicely illustrated this point by showing the effect of a linear tapering regimen on the percentage inhibition of SERT [Horowitz and Taylor 2019]:

This means that SERT inhibition is dramatically reduced at lower doses and therefore, linear tapering is likely to cause withdrawal symptoms eventually. 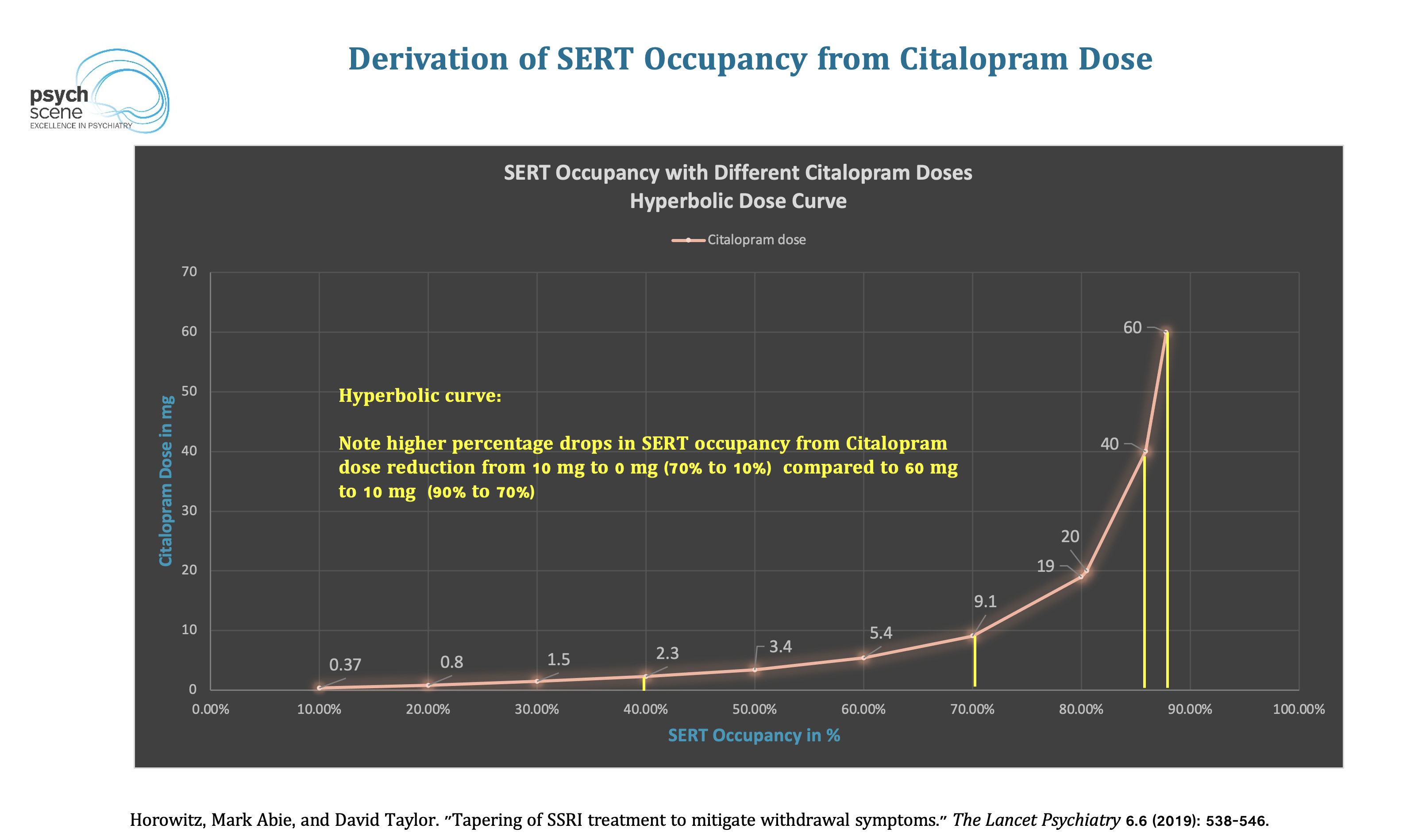 Therefore, when tapering antidepressants, clinicians are suggested to follow a regimen that focuses on biological effect (e.g. SERT occupancy) rather than arbitrarily withdrawing medication using a linear stepwise approach.

We suggest that a personalised rate for withdrawal could be established by an initial trial reduction of SSRI dose, equivalent to a reduction of 10% serotonin transporter occupancy (or 5% if being cautious), with subsequent monitoring of the severity and duration of withdrawal symptoms.

An initial 10% reduc­tion in serotonin transporter occupancy is suggested because this would result in approximately halving the dose from the therapeutic minimum dose (eg, from 20 mg to 10 mg of citalopram), which is tolerated well by most patients.

If the patient’s Discontinuation ­Emergent Signs and Symptom score were to have returned to baseline 1 month after the initial reduction, then a rate equivalent to 10% reduction of serotonin transporter occupancy per month could be prescribed. This process should be subject to ongoing monitoring, with the rate titrated to patient tolerance. [Horowitz and Taylor 2019]

From a practical viewpoint, it may be necessary to switch to liquid formulations given the requirement for micro-modifications of dose during the later tapering stages.

According to the RANZCP Guidelines:[Malhi et al., 2021]

We suggest that, for those with risk factors for severe discontinuation and withdrawal symptoms (DaWS), the first step is to reduce the dose to the minimal effective dose. Following this, the dose should be halved, and after a week, the dose should be reduced more slowly in small decrements (allowing 2 weeks for each dose reduction), according to how the tablet can be divided. Unfortunately, this is not feasible with medications that are encapsulated (e.g. venlafaxine and duloxetine).

When starting on an antidepressant, inform patients that they may experience discontinuation and withdrawal symptoms, and they should not stop antidepressants abruptly. They should discuss stopping their antidepressant with their treating physician.

Due to the substantial variability in individuals responses to the tapering of medication, the reduction should be individually tailored to the patient.

The dose of AD should be tapered down with the dose generally lowered in at least weekly steps, and the rate of stepping down the dose needs to be tailored to the individual patient.

For patients with one or more risk factors for withdrawal and discontinuation symptoms (treatment at higher than usual dose, long-term period on an antidepressant, previous discontinuation and withdrawal symptoms or symptoms emerging with missed dose(s)), a slower taper is recommended.

For patients stopping their medication to switch to another antidepressant because of lack of efficacy or intolerable side-effects, a more rapid dose reduction can be used (over days) while the new antidepressant is introduced at a low dose. The dose is then increased (provided there are no contraindications for this, such as switching to and from an MAOI).

Discontinuation/withdrawal symptoms from the first antidepressant (after careful review of the symptoms the patient reports) need to be distinguished from treatment-emergent side-effects from the newly introduced antidepressant.

The RCPsych guidance on stopping antidepressants showed two examples of SSRI dose reductions; 50% every 2-4 weeks and 10 per cent every 2-4 weeks using tablets and liquid. 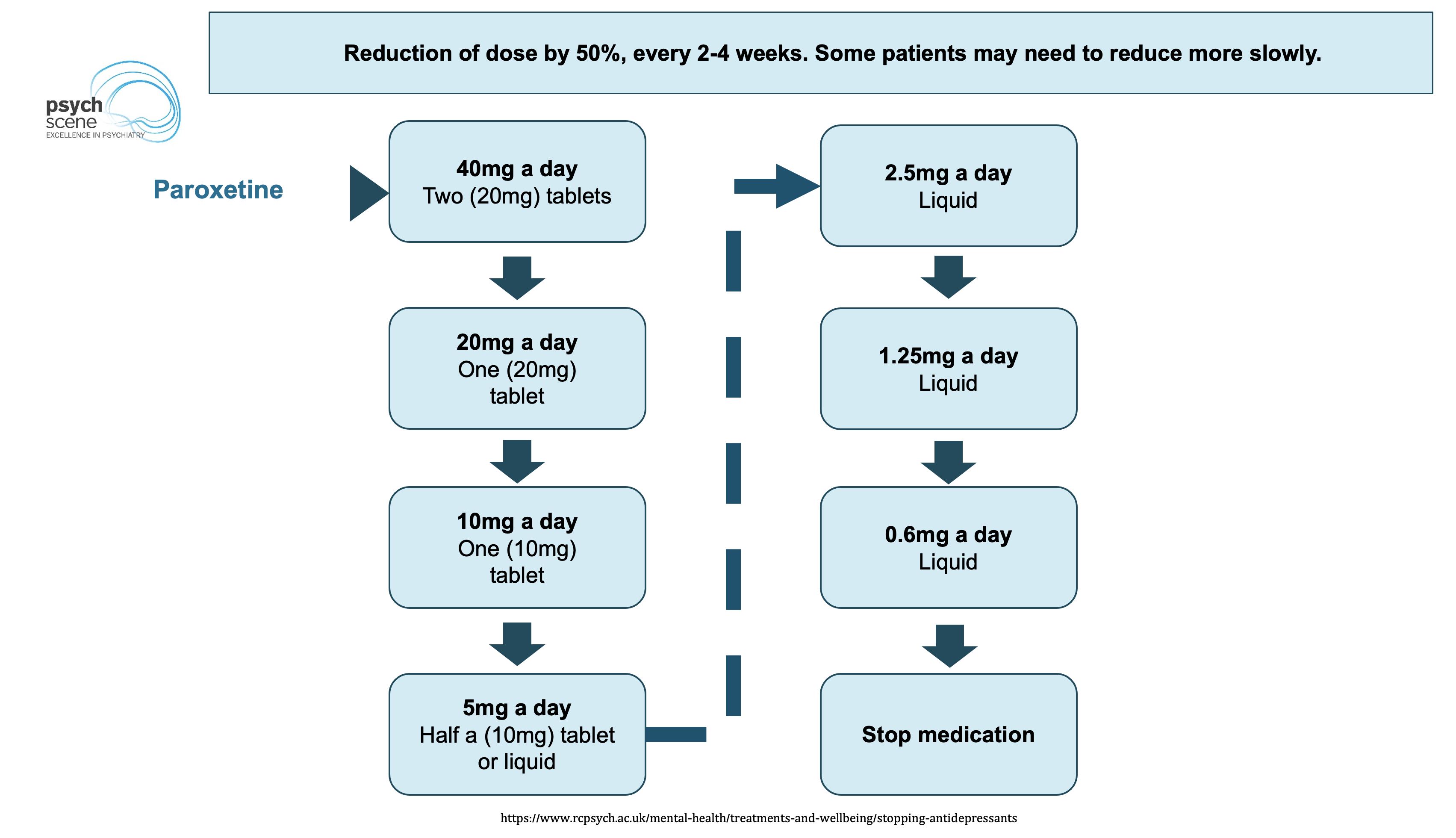 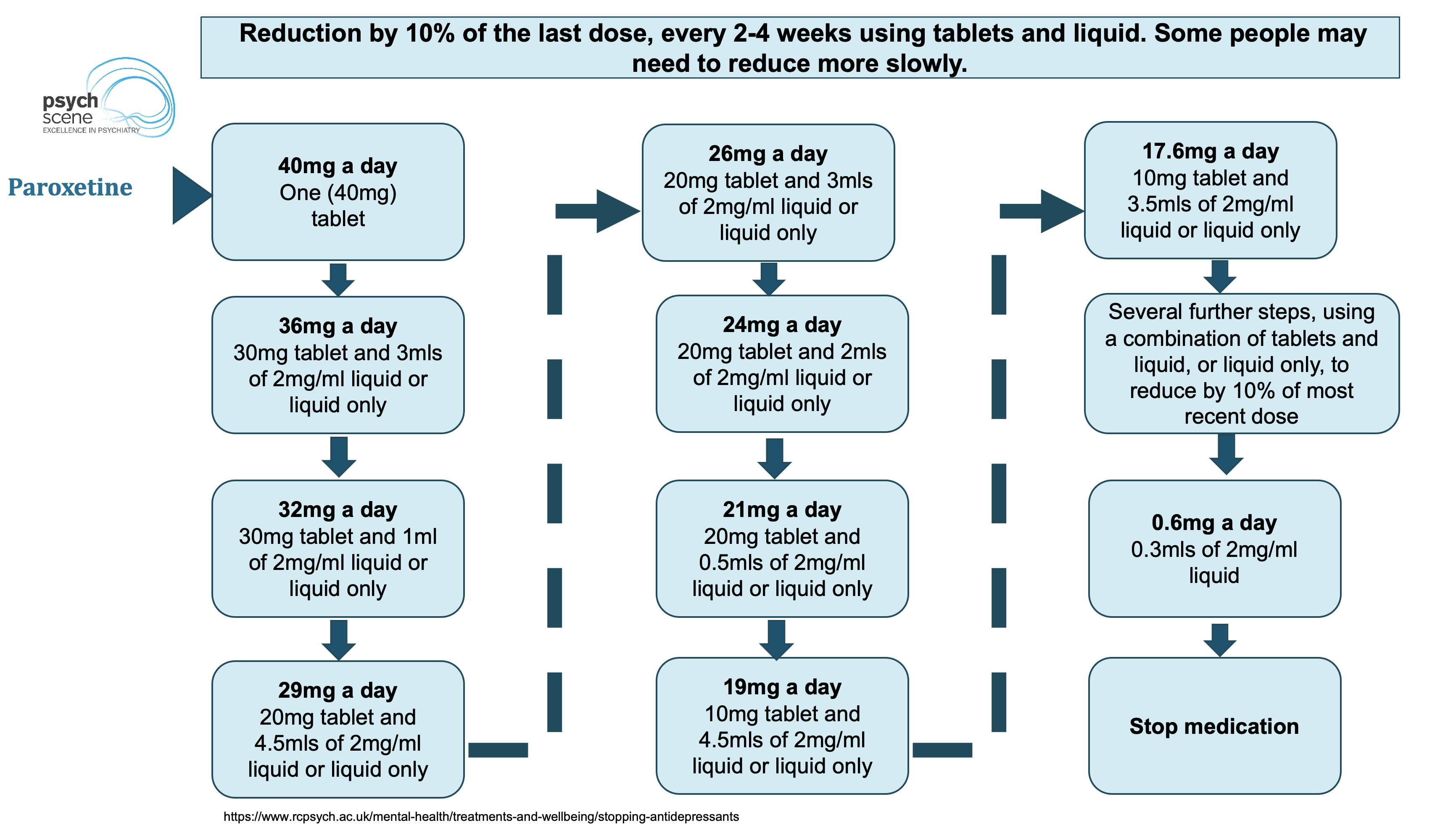 Among the 338,498 reports with antidepressants of interest, there were 15,507 cases of withdrawal syndrome. According to the study; 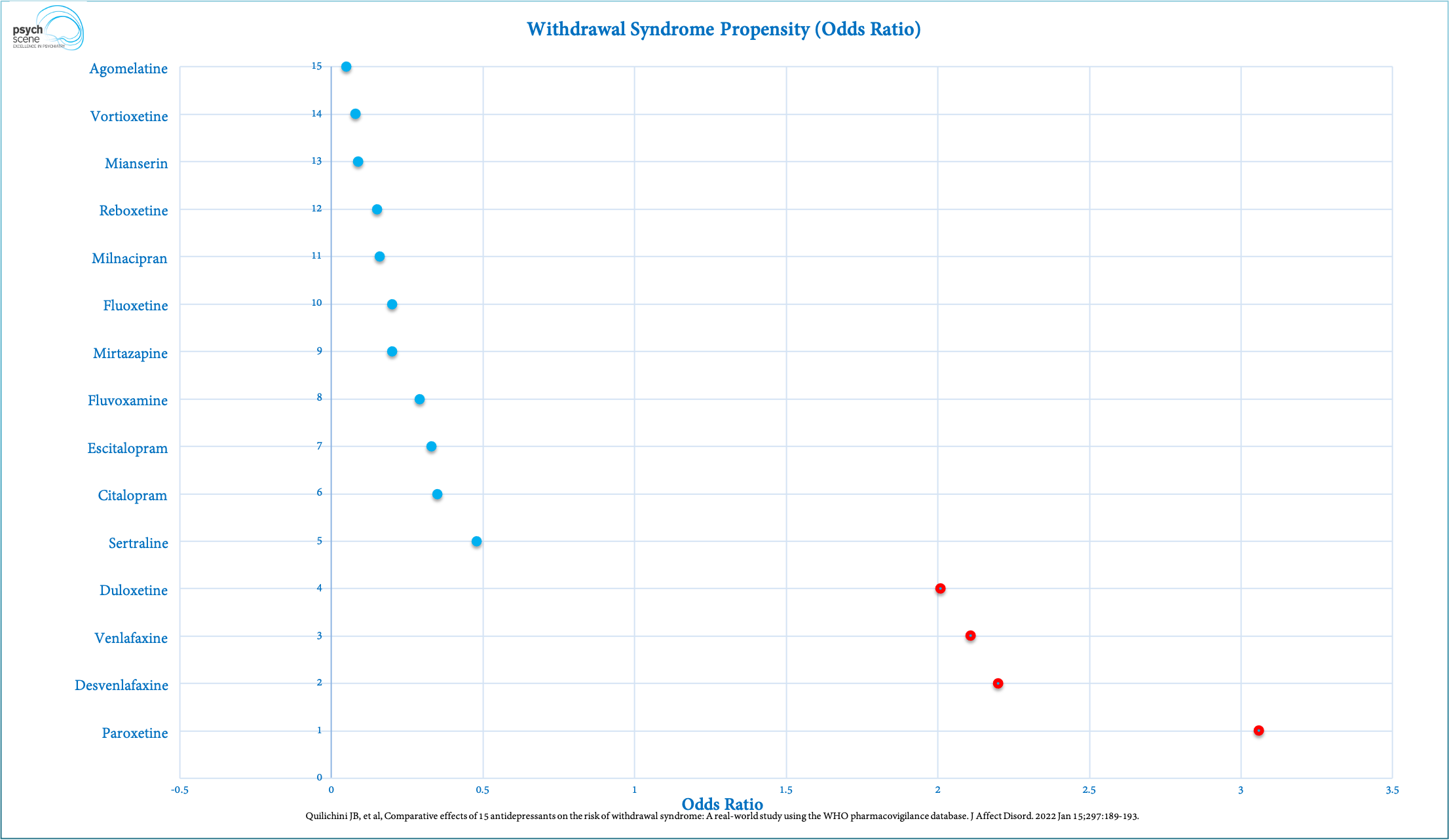 However, the symptoms of withdrawal can be mitigated through the application of personalised tapering regimens that aim to minimise the incidence and severity of withdrawal symptoms.

Clinicians should take antidepressant withdrawal risk into account in addition to other side effects in choosing antidepressants for their patients.

A systematic review into the incidence, severity and duration of antidepressant withdrawal effects: Are guidelines evidence-based?

Davies J and Read J. A systematic review into the incidence, severity and duration of antidepressant withdrawal effects: Are guidelines evidence-based? Addict Behav. 2019;97:111–121.

Practice Guideline for the Treatment of Patients With Major Depressive Disorder

Depression: The NICE Guideline on the Treatment and Management of Depression in Adults (updated edition)

Long-term antidepressant use: a qualitative study on perspectives of patients and GPs in primary care

Discontinuation syndrome associated with paroxetine in depressed patients: a retrospective analysis of factors involved in the occurrence of the syndrome

Himei A and Okamura T. Discontinuation syndrome associated with paroxetine in depressed patients: a retrospective analysis of factors involved in the occurrence of the syndrome. CNS Drugs 2006;20: 665–672.

Safety of abrupt discontinuation of fluoxetine: a randomized, placebo-controlled study

Clinically relevant pharmacology of selective serotonin reuptake inhibitors. An overview with emphasis on pharmacokinetics and effects on oxidative drug metabolism

Comparative effects of 15 antidepressants on the risk of withdrawal syndrome: A real-world study using the WHO pharmacovigilance database.