Depression occurs commonly in schizophrenia and first-episode psychosis (FEP) and challenges the Kraepelinian Dichotomy between bipolar disorder and schizophrenia. 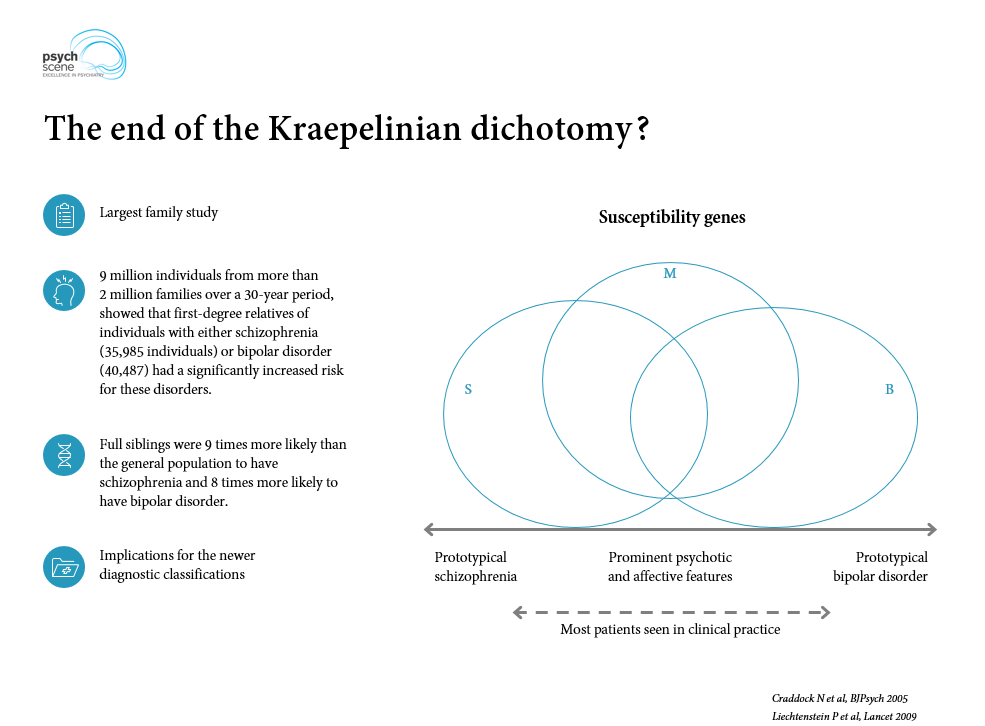 In the clinically high-risk phase where individuals may be in the prodrome of developing a psychotic episode, depression occurs in approximately 40% of people.

The close linkage between psychosis symptoms and depression, especially in the prodromal phase has led to proposals that depression in schizophrenia may be the severe end of a dimension of affective dysregulation beginning in adolescence progressing into the early stages of psychosis as the illness crystalizes. [Upthegrove R et al., 2017]

Depression has been linked to increased risk of transition from Ultra High Risk (UHR) to first-episode psychosis (FEP). Transition rates in clinical high-risk groups are between 16-20%, and in people who do not transition to FEP, depression, and Axis I disorders are highly prevalent. [Beck et al. 2019]

IMPORTANCE OF DEPRESSION IN SCHIZOPHRENIA

Individuals with schizophrenia and depression were significantly more likely to:

A qualitative study showed how depression in schizophrenia is intricately linked to the experience of schizophrenia and could be a driver of some positive symptoms. [Sandhu et al. 2013]

This area has also been explored quantitatively looking at the role of subordination and shame within the depression in psychosis. [Upthegrove et al. 2014]

NICE guidelines recommend routine monitoring for coexisting conditions, including depression, particularly in the early phases of treatment of psychosis and schizophrenia in adults.

In individuals, particularly those under the age of 18 years, care is needed when prescribing antipsychotics which have side effects such as weight gain, to minimise harm to self-esteem and shame related to psychosis.

The Calgary Depression Scale for Schizophrenia (CDSS) is widely used to assess depression as a distinct from negative symptoms, with the weight resting more on subjective reports of hopelessness, guilt, and suicidal ideation symptoms of depression.

Anhedonia is considered a core feature of depression.

Recently there has been a distinction between motivational anhedonia (motivation to pursue rewards) and consummatory anhedonia (pleasure experienced in anticipation or response to rewards).

A recent systematic review investigating the relationship between negative symptoms and depression in schizophrenia showed that [Krynicki C et al., 2018]: 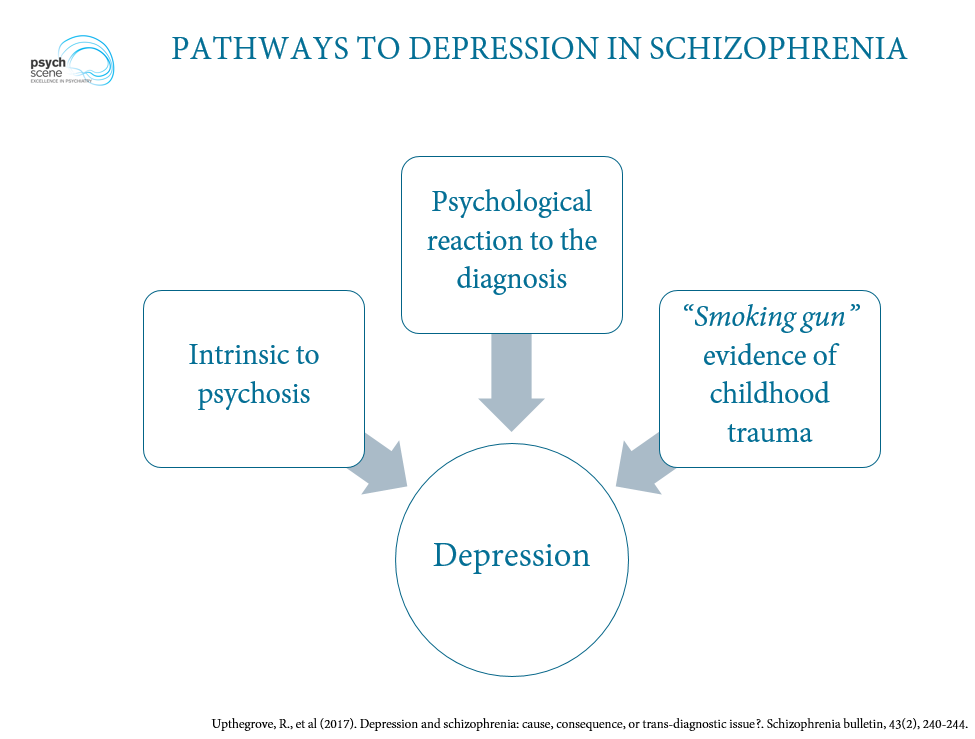 TREATMENT OF DEPRESSION IN SCHIZOPHRENIA 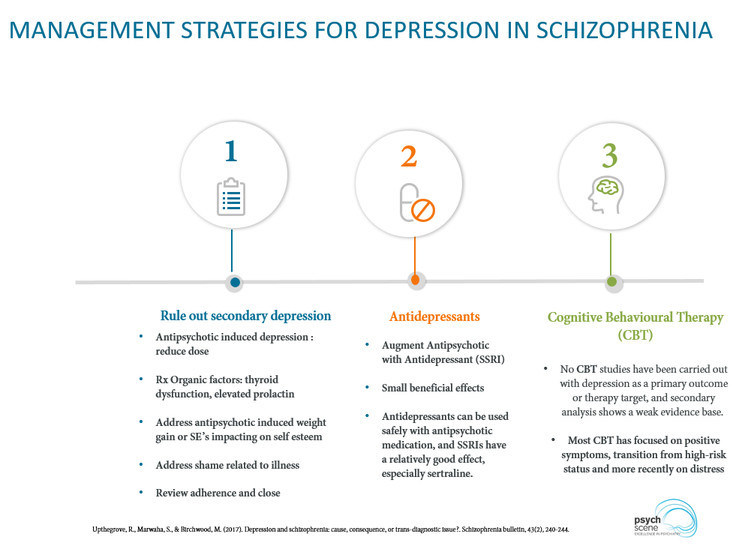 There have been few sufficiently powered, randomised controlled trials of antidepressants for the treatment of depression in schizophrenia. A recent meta-analysis shows that antidepressants can be used safely with antipsychotic medication, and SSRIs have a relatively good effect, especially sertraline. [Helfer et al. 2016]

Analysis of primary outcomes (depressive and negative symptoms) suggests small, beneficial effects of adjunctive antidepressants. It would appear that this augmentation can be accomplished with a low risk of exacerbation of psychosis and adverse effects.

Antidepressant medication should be discontinued if no benefit is found after an adequate trial.

No CBT studies have been carried out with depression as a primary outcome or therapy target, and secondary analysis shows a weak evidence base.

Further targeted research is needed to develop strategies to understand and treat depression in schizophrenia.

Clinical and functional long-term outcome of patients at clinical high risk (CHR) for psychosis without transition to psychosis: A systematic review

The evolution of depression and suicidality in first-episode psychosis

Depression during first-episode psychosis and subsequent suicide risk: A systematic review and meta-analysis of longitudinal studies

Depression in first-episode psychosis: the role of subordination and shame

Efficacy and Safety of Antidepressants Added to Antipsychotics for Schizophrenia: A Systematic Review and Meta-Analysis

Helfer B, Samara MT, Huhn M, et al. Efficacy and Safety of Antidepressants Added to Antipsychotics for Schizophrenia: A Systematic Review and Meta-Analysis. Am J Psychiatry. 2016;173(9):876-86.