Depression and Exhaustion as a Risk Factor for Cardiovascular Disease

However, the strength of mortality risk prediction is not as effective as it could be with researchers attempting to identify additional non-classical risk factors.

In a previous article, we covered the strong bi-directional relationship between depression and cardiovascular disease and how stress is associated with increased bone marrow activity which inturn increases the risk of CVD via arterial inflammation. (see diagram) 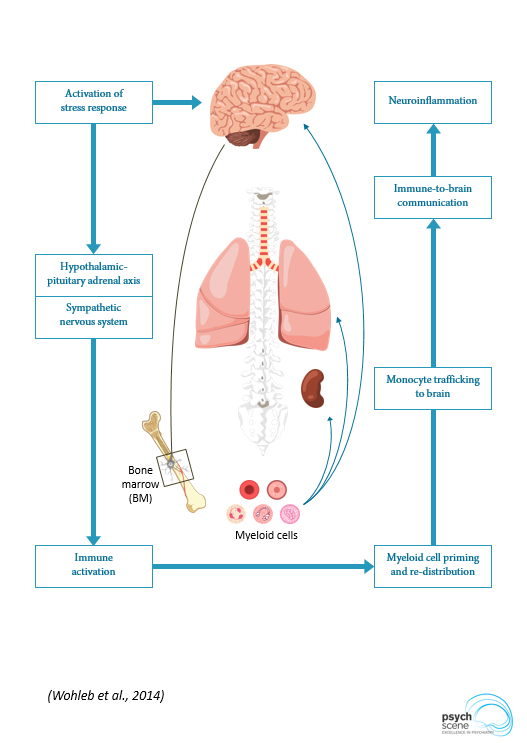 Stress activates the immune response via sympathetic pathways. The myeloid cells from the brain marrow (haemopoietic activity) act as primary inflammation drivers causing damage to the endothelium increasing the risk of CVD.

Clinical assessments show that reduced quality of life, psychosocial issues, anxiety and non-adherence to medication are common outcomes in depressed patients with CVD.

Previous research by Ladwig and colleagues has shown that in the general population depression is a common outcome after myocardial infarction. [1]

Furthermore, depression after a CVD event is a leading contributor to incomplete recovery 6 months after acute myocardial infarction.

Following on from this, a newly published study by the same researchers investigated the impact of a depressed mood and exhaustion (DEEX) on recovery over a 10-year period. [2]

These men had taken part in one of three population-based studies in Germany between 1984 and 1995 with a 10-year follow-up to determine the extent of fatal CVD events in this cohort.

DEEX was measured using the von Zerssen symptom checklist, which included self-measures of irritability, fatigue, tiredness, inner tension, loss of energy, difficulty in concentrating, nervousness and anxiety. (Note that some of these features are part of the mixed features in depression)

To predict CVD mortality the researchers estimated absolute, relative and population-attributable risk factors of DEEX within the context of hypertension, hypercholesterolemia, smoking, obesity, and diabetes.

The statistical probability on disease risk frequency was presented as per person-years, which is a cumulative incidence measure and is a much more accurate measure compared to prevalence ratios.

Cumulative incidence allows researchers to define the number of new incidents within a specified period for a specific population.

To determine the ranking of DEEX in the context of the five classical CVD risk factors, the researchers calculated risk prediction for all-cause and CVD-mortality over the 10-year observation period.

This analysis showed that men who were diagnosed with DEEX were as likely to die from CVD as a patient with hypercholesterolemia or obesity.

However, DEEX was not as strongly correlated with CVD-related mortality as hypertension, smoking and type II diabetes.

Across the whole population, DEEX was estimated to be responsible for 15% of the deaths associated with CVD.

The researchers showed that this rate was comparable with risk factors such as hypercholesterolemia, obesity and smoking, which cause between 8.4 to 21.4% of CVD-related deaths.

The data in this study is restricted to men only, and therefore these results cannot be extrapolated to females particularly given that females have different risk factor ratios for CVD mortality.

The von Zerssen checklist does not have the strongest construct validity for the diagnosis of depression; it does focus on symptoms such as vitality, weakness and vital exhaustion. These three symptoms are considered relevant concerns for patients recovering from a CVD event.

The researchers observed that DEEX was a more significant risk factor than high cholesterol and obesity for predicting CVD mortality risk.

Therefore, DEEX should be included with the big five classical risk factors by physicians when predicting CVD mortality risk scores.

The causal relationship between DEEX and CVD is unclear. However, it is known that depression is associated with poor lifestyle behaviours and non-compliance with medications. [3], [4]

Also, depressed individuals have been shown to have endothelial dysfunction and disruptions in heart rate, which can predispose recovering CVD patients from having an increased mortality risk.

Depressed individuals were also shown to have malfunctions in their endocrine-immune systems with a chronic low-level state of inflammation present. (read more on the mechanisms of how stress can increase the risk of  CVD)

Although screening for depression in the general population is controversial with no apparent benefits, this study does suggest that detection of DEEX could reduce CVD mortality risk by 15%.

Therefore, primary care physician guidelines should consider incorporating depression screening along with pharmacological and psychological therapy as treatment options as a means to reduce CVD risk.

Loading Depression and Exhaustion as a Risk Factor for Cardiovascular Disease

1. Case-finding for depressive and exhausted mood in the general population

Ladwig K et al., Case-finding for depressive and exhausted mood in the general population: reliability and validity of a symptom-driven diagnostic scale. results from the prospective MONICA/KORA Augsburg Study. Annals of Epidemiology. 2004

2. Room for depressed and exhausted mood as a risk predictor for all-cause and cardiovascular mortality beyond the contribution of the classic somatic risk factors in men

Ladwig K et al. Room for depressed and exhausted mood as a risk predictor for all-cause and cardiovascular mortality beyond the contribution of the classic somatic risk factors in men. Atherosclerosis. 2017

3. Anxiety and depression are associated with unhealthy lifestyle in patients at risk of cardiovascular disease

Bonnet F et al., Anxiety and depression are associated with unhealthy lifestyle in patients at risk of cardiovascular disease. Atherosclerosis. 2005