Amphetamines come in many forms and have been used for decades recreationally and therapeutically. Methamphetamines are also available in a number of different forms, tablets (‘pills’), an oily paste (‘base’), powder and a crystalline form of methamphetamine hydrochloride salt (‘ice’, ‘shard’, ‘crystal’).

Thus, around 2% of the population (14 years and over) report the use of methamphetamines over the previous 12 months. In fact, the 2016 data suggest a slight decrease, to 1.4%, but here has been some conjecture about this more recent figure, with suggestions that stigma about ice use has led to decreased reporting.

Irrespective, such high-level data belie a number of complexities and worrying trends in terms of the type of methamphetamine being used. The most concerning has been the massive increase in the component of the overall methamphetamine use attributable to ice.

In the Australian National Drug Strategy Household, the proportion increased from 22% in 2010 to 50% in 2013. Fuelling this trend is more ready availability of highly pure crystal methamphetamine relatively cheaply.

It is also the case that ice available on the street is becoming purer: from around 10-20% purity to 60-70% in recent police seizures.

WHY IS THERE SUCH A CONCERN ABOUT THE RISE IN USE OF CRYSTAL METHAMPHETAMINE?

As psychiatrists, we see the impact of crystal methamphetamine in clinical practice in terms of its direct and indirect clinical effects; and in the public sector, it has become part and parcel of everyday practice, all too often accompanied by violence and aggression to people and property.

TRENDS IN USE OF METHAMPHETAMINES IN AUSTRALIA

As outlined above, methamphetamine use has shifted in Australia to be more dominated by ice, with use of speed (pills) declining and base being fairly rare: the 2013 Australian National Drug Strategy Household data show the proportions of methamphetamine use apportioned to ice increasing to 50% (from 22% in 2010) and speed decreasing from 59% in 2010 to 39% in 2013.

Thus, it seems that amphetamine users prefer ice to other forms of stimulant drug.

There is an associated change in the mode of administration, as ice is commonly smoked: this bypasses the liver and avoids first-pass metabolism, making it very highly available very quickly, to the brain.

The speed of onset of the euphoriant effect from smoking ice is similar to when it is injected, adding to its addictive potential.

About 10% of past-year users of ice inject it, which carries inevitable other health risks including blood-borne viruses.

A particular issue in Australia is that Indigenous people tend to start using ice at a younger age that the rest of the population.

This adds to the already heavy health burden borne by Indigenous Australians and contributes to sociocultural problems in indigenous communities.

While overall rates of methamphetamine use have not increased dramatically over the past 20 years, the trend to the crystalline form being used more has been mirrored by profound impacts on the health system broadly and emergency departments, drug and alcohol, and psychiatric services in particular.

For example, hospital separations due to ‘stimulants other than cocaine’ showed more than a doubling from 2010 to 2013, and separations for ‘psychotic disorders due to methamphetamine’ showed an even more dramatic increase across the same time period.

The psychotic symptoms associated with methamphetamines (and most starkly with ice) can be dramatic and highly distressing.

Aggression and violent acts are all-too-common in the setting of ice-related psychosis.

A snapshot of a single month (September 2017) at St Vincent’s Hospital in Melbourne showed that over 20% of inpatient psychiatric admission were directly or indirectly attributable to ice.

These patients were also highly likely to be violent to property, staff and other patients.

Physical restraint, seclusion and administration of intramuscular antipsychotic medications were common characteristics of their inpatient stay.

The impact on an already overstretched health system cannot be underemphasised.

The damage to property and the impact on other patients and staff contribute to a climate of fear amongst co-patients, demoralisation amongst staff, and a feeling of the inpatient environment being out of control and highly un-therapeutic.

Acute intoxication with ice leads to euphoria and increased self-confidence. The violence and harm to others associated with this mental state cannot be underestimated.

Psychotic symptoms, usually with paranoid and/or grandiose delusions plus hallucinations can be terrifying and can also result in dangerous behaviours.

Acute medical effects of ice intoxication also include a serotonin syndrome, which can be fatal.

Dehydration and renal problems, with dangerous electrolyte disturbances, can occur.

Tachycardia is dramatic and can cause dysrhythmias, while hypertension can result in cerebrovascular accidents.

Longer-term use of ice has myriad physical health consequences, including weight loss; dehydration; malnutrition; renal failure; poor dentition; and skin picking which can result in dramatic and dangerous dermatological lesions. 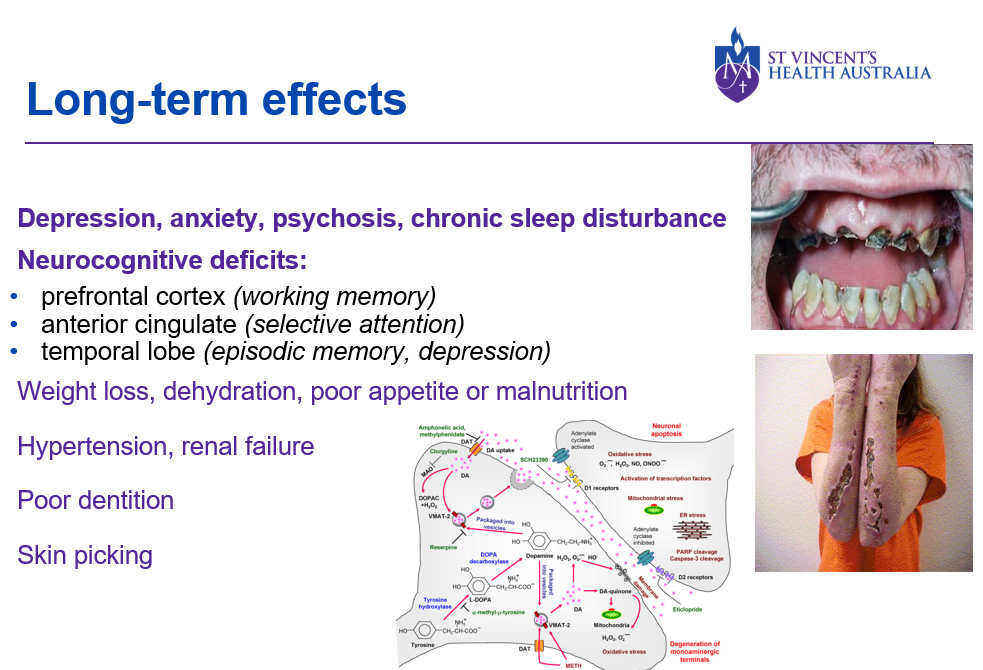 Cardiomyopathy associated with long-term ice use has also been described.

Psychiatric consequences include anxiety and depression and chronic sleep disturbance.

Psychotic symptoms can occur even outside states of acute intoxication, and become enduring, longitudinally having all the hallmarks of a chronic schizophrenia-like state.

Effects on cognition have been well described, and encompass deficits in working memory, selective attention and episodic memory. These effects are compounded by poor nutrition, alcohol use and the medical problems described above.

Added to these risks are the consequences of intravenous drug use amongst those who prefer this route of administration. These include blood-borne viruses, endocarditis and local skin lesions.

Of course, many ice users also use other drugs, and this adds to the detrimental consequences. Rates of family violence and criminality are also very high, and families and communities can be profoundly affected.

The immediate imperatives around the acute phase treatment of people intoxicated with crystal methamphetamine is the provision of a safe environment, such that harm to self, others and property can be prevented or at least reduced. 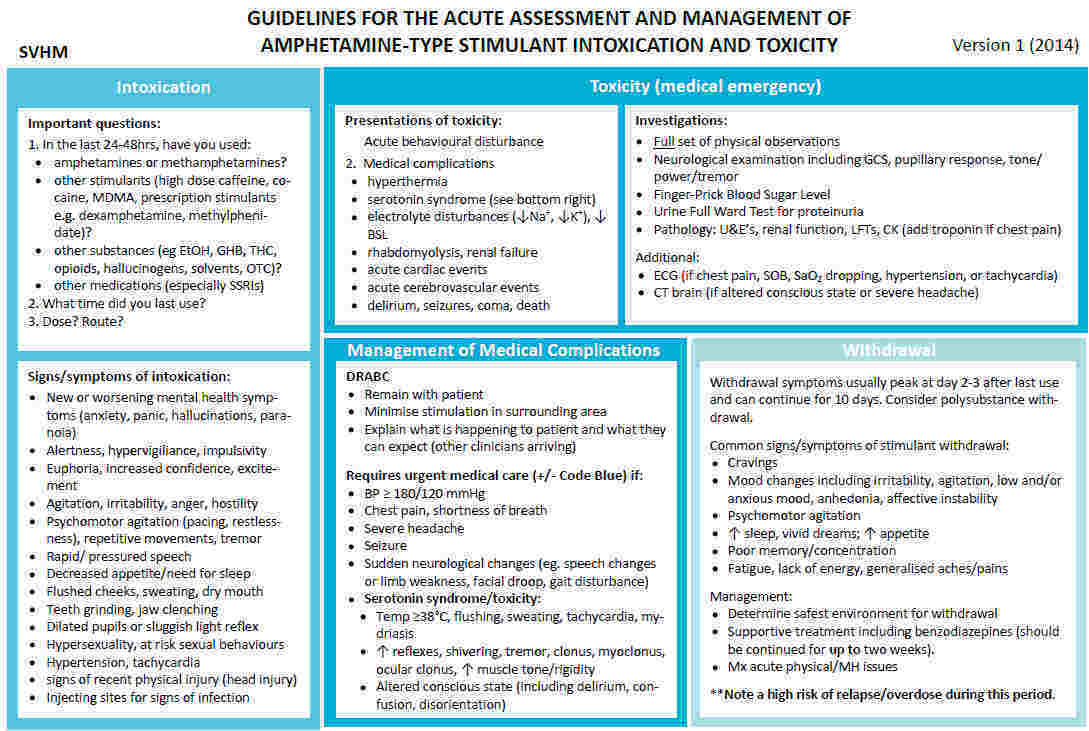 Dealing with medical risks, as outlined above, is also required. Often emergency departments bear the brunt of this, and physical restraint and intravenous medication is often required.

Regarding medications, emergency departments have much more latitude than inpatient psychiatric services in the choice of both drug and route of administration, largely because they are well set up to monitor for any adverse outcomes, and can administer appropriate medical care.

A sub-analysis of those people intoxicated with crystal methamphetamine found that time to sedation was quicker with droperidol/midazolam: 85.3% of patients receiving this combination were adequately sedated at 10 minutes, compared to 46.7% of droperidol group and 50.0% of the olanzapine group.

Side effects were similar across the arms, the most common being oxygen desaturation.

These data support the use of the combination of midazolam and droperidol in individuals acutely intoxicated with ice and who require immediate tranquilisation.

Most Australian psychiatric inpatient services do not use intravenous medications, and some prohibit midazolam. Thus, oral or intramuscular (IM) options are followed.

The approach adopted at St Vincent’s Hospital in Melbourne, and endorsed in the schizophrenia clinical practice guideline of the RANZCP, is a step-wise algorithm dependent upon the level of arousal of the patients and their willingness to accept medication. 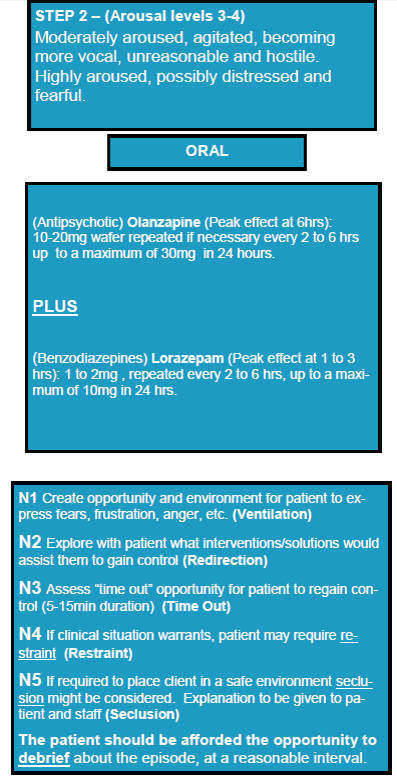 Should oral agents fail, or the patient not be amenable, IM options include olanzapine, but increasingly we are finding that in the setting of crystal methamphetamine, droperidol is more effective; IM lorazepam can be used adjunctively if required. 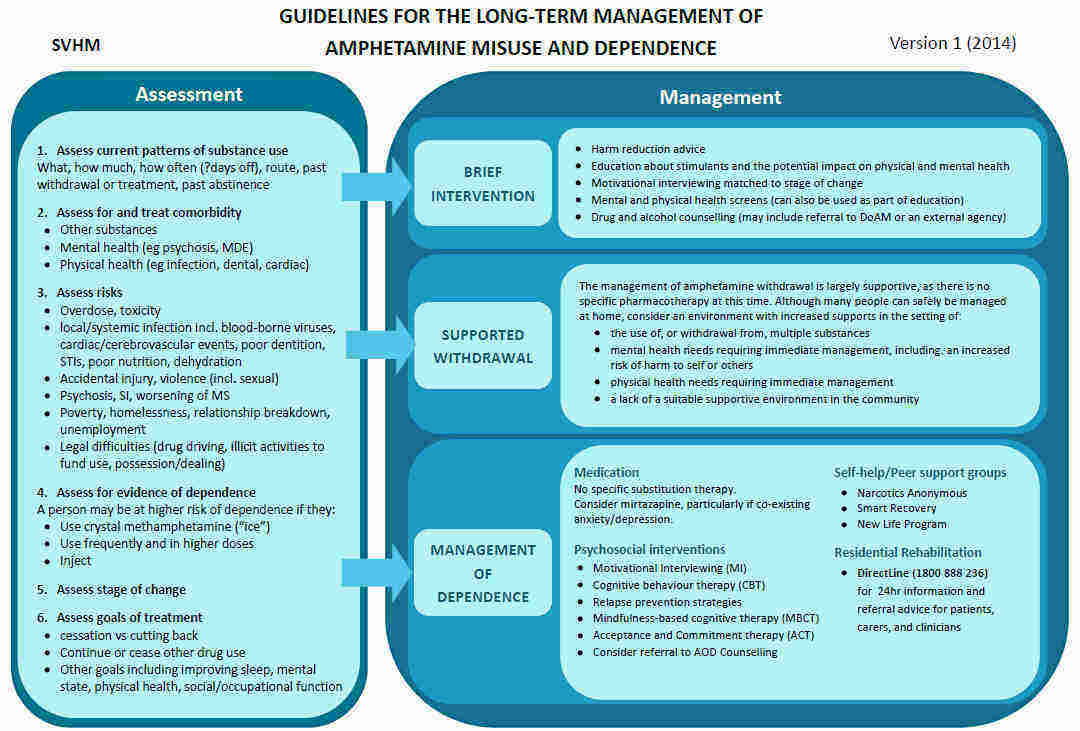 This requires a careful and well-orchestrated package of care encompassing a number of different agencies. Regrettably, this is not readily achieved, expressly when the individuals themselves are not engaged in the process.

Detoxification is an important first step, but facilities to manage this are sparse. Addressing physical health issues relevant to crystal methamphetamine (see above) is crucial.

In terms of validated psychological approaches to ice addiction, the evidence base is thin.

Certainly, motivational interviewing, decisional balance and such generic tools can be usefully employed.

Contingency management has been associated with gains in some relatively small trials.

Some success is being achieved using an acceptance-commitment framework, with an emphasis on values and living a life without drugs.

Addressing broader issues related to the impact on family members is a vital part of any intervention targeting people who use ice.

The major problem is to ensure ongoing abstinence, as people fall back into their peer group, who continue to use; and reinstatement of regular use after even a single exposure, in common.

Regarding medication options, a number of strategies have been investigated but have largely been unsuccessful.

2. Mirtazapine: More encouraging results have been found with the sedative antidepressant mirtazapine.  Thus, a 12-week study comparing weekly drug counselling alone with counselling plus 30mg mirtazapine in 60 men who prefer sex with men, showed a reduced risk of a positive urine screen in the mirtazapine group (44% vs 63%), with a number needed to treat (NNT) of 3.1. There was also a reduction amongst the mirtazapine group, in risky sexual behaviours.

3. Substitution therapies have also not been particularly impressive, with failed trials of methylphenidate and trend-only improvements with modafinil and dexamphetamine.

4. Lisdexamphetamine is an appealing option in that it cannot readily be diverted and abused. It has a lis moiety bonded to the dexamphetamine, and this requires to be cleaved off in the red blood cells of the gut before active dexamphetamine in liberated.

The slower release of the active drug means less of a ‘rush’ and a more enduring effect, and this might be particularly helpful as a substitute to crystal methamphetamine. Trials are currently underway employing this strategy.

Methamphetamine use in Australia; its history, treatment, and ramifications for users and their families

Gordon DG & de Jong G (2018) Gaps in the ice: Methamphetamine use in Australia; its history, treatment, and ramifications for users and their families. International Journal of Mental Health Nursing doi 10.1111/inm.12480