Delay in Starting Clozapine in Treatment Resistant Schizophrenia – Why it Matters

Schizophrenia is a severe mental illness that is characterised by psychotic symptoms such as delusions, hallucinations, social withdrawal and cognitive impairment. Schizophrenia has a high morbidity and mortality rate. A recent systematic review and meta-analysis showed that Schizophrenia was associated with a weighted average of 14·5 years of potential life lost and was higher for men than women. The overall weighted average life expectancy was 64·7 years and was lower for men than women. [1]

Treatment-resistant schizophrenia (TRS) describes patients who fail to respond to pharmacotherapy, and the widely accepted definition is a non or inadequate response to at least two antipsychotics of adequate dose for an adequate duration.

It is estimated that anywhere between 20 – 45 % of patients are partial responders to treatment with 5 – 10 % of patients receiving no apparent benefit [2]. Clozapine is an atypical antipsychotic that is considered first-line in TRS [3].

A recently published paper at the Okayama Psychiatric Medical Center in Japan attempted to understand the critical nature of the clozapine treatment window in TRS. They aimed to determine the symptomatic outcomes of TRS and the delay in initiating clozapine treatment. 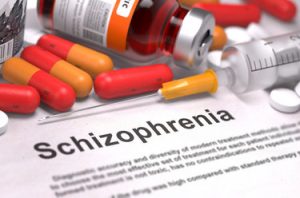 Clozapine was first introduced into practice in the 1960s. However, in 1976, there were reports of fatal agranulocytosis (drastic reduction in white blood cells), which resulted in its complete withdrawal from the market.

Then, in 1990, it was again approved but only as a third-line agent in the treatment of TRS and with the caveat of routine blood testing to monitor white blood cell and absolute neutrophil counts to reduce the risk of any further fatal agranulocytosis.

Clozapine use can be associated with severe side effects of agranulocytosis, neutropenia, and myocarditis, which are monitored during treatment.

However, an 11-year follow-up study of over 66 000 patients with schizophrenia in Finland concluded that clozapine was the most effective antipsychotic in reducing mortality compared to other SGA’s. [4]

Clozapine is a dopamine and serotonin antagonist (5HT2A) with a few unique differences compared to other SGA’s.

Clozapine has much greater antagonistic activity on cortical and limbic dopamine D4 than D2 receptors.

The combination of relatively high D1, low D2, and very high 5-HT2 receptor occupancy rates is unique to Clozapine and may explain its lower propensity for Extrapyramidal side effects.

It may also explain why it is used as a treatment for Tardive Dyskinesia.

There have been several studies that have shown the superiority of clozapine over other Second-Generation Antipsychotics (SGA’s) on various outcomes such as response to treatment, adherence to medication, and patient satisfaction.

Even though clinical practice guidelines endorse clozapine therapy in TRS, there seems to be a continuing resistance by clinicians to prescribe clozapine at a suitable time point.

Clozapine has demonstrably better efficacy and effectiveness than other antipsychotics, and is useful when concerns exist over suicidality, aggression and comorbid substance misuse.

A number of factors, including a worrying side-effect profile and consequent limited license, clinicians’ negative beliefs and possible issues with service provision, conspire to lead to the delayed use and underutilisation of clozapine. Additionally, clozapine is a commercial orphan, neither marketed nor promoted.

Despite these factors, clozapine remains an important therapy option that can sometimes transform an individual’s life. Clozapine should not be considered a treatment of ‘ last resort’ but drug of first choice as soon as non-responsiveness to established first-line treatments is evident. [5]

THE STUDY - WHO AND WHAT WAS STUDIED?

A recently published paper at the Okayama Psychiatric Medical Center in Japan attempted to understand the critical nature of the clozapine treatment window in TRS. They aimed to determine the symptomatic outcomes of TRS and the delay in initiating clozapine treatment.

The study was a retrospective observational review of 90 patients with TRS in the inpatient ward of the Okayama Psychiatric Medical Center.

Schizophrenia was determined to be TRS when there were two previously failed trials of chlorpromazine and a Global Assessment of Functioning score of < 41 in each trial. TRS patients started clozapine between January 1st, 2010 and February 28th, 2015 and had to remain on clozapine for at least 3 months to be included in the study.

A multiple linear regression analysis was applied to a previously published observational study to determine the predictive and discriminative ability of clozapine treatment delay on TRS symptoms. Statistically, this was assessed using a receiver operating characteristic (ROC) curve to measure the overall discriminative power of the critical treatment window.

WHAT ARE THE LIMITATIONS OF THE STUDY?

Overall, these findings suggest that a delay in clozapine treatment may be detrimental to patients suffering from TRS with a clinical outcome similar to untreated psychosis.

According to the authors –

Clinicians should strive to reduce the delay in initiating clozapine to less than 3 years to improve symptomatic outcomes in TRS and to prevent clozapine-resistant schizophrenia. [6]

Following the above study, a systematic review of the available literature echoed the findings that there is a possible link between delay in clozapine use and poorer treatment outcomes in patients with treatment-resistant schizophrenia.

Clozapine is a gold standard antipsychotic for TRS with a substantial evidence base. Its initiation as a treatment for TRS is often delayed despite guidelines advocating its use earlier in treatment resistance.

Evidence suggests that before commencing clozapine treatment, clinicians are more inclined to recommend polypharmacy or high dose treatment: both of which have little to no evidence to support these strategies [7].

Polypharmacy and high-dose strategies come with an increased risk of complications as well as more severe side effects.

In routine clinical practice, clozapine initiation had a mean delay of 47 months, with 36.2% of the studied patients previously on antipsychotic polypharmacy, while 34.2% of patients had previously been provided with high-dose treatment above and beyond the licensed maximum dose. [7]

In another retrospective study, Üçok and colleagues showed that the mean delay in clozapine treatment after a TRS diagnosis was 29 months.

Further analysis showed that those who showed good improvements after clozapine initiation had a mean delay of only 21 months.

For those patients who were reported to have little to no response to clozapine treatment, the mean delay in clozapine initiation was closer to 47 months. [8]

A systematic review and meta-analysis showed the following variables were significantly associated with a better response to clozapine: [Griffiths et al., 2021]

A recent study in the American Journal of Psychiatry demonstrated a nearly two-fold higher mortality rate among individuals with treatment-resistant schizophrenia not treated with clozapine than clozapine-treated individuals. [9]

Although there will be good clinical reasons for clozapine not being initiated for some patients, it is hypothesised here that clinicians’ knowledge, attitudes and preferences are more likely predictive factors for explaining the variation in clozapine prescribing rates and that these will need to be addressed before adherence to clinical guidelines for clozapine is likely to improve. [11]

A 2018 systematic review identifying barriers to using clozapine (the majority of studies obtained views from consultant psychiatrists) in treatment-resistant schizophrenia found the major barriers to be: [12]

The most recent study from Acta Psychiatr Scand 2018 showed that the protective effect of clozapine in patients with treatment-resistant schizophrenia (TRS) on all-cause mortality was significant (adjusted hazard ratio 0.61; 95% confidence interval 0.38-0.97; P = 0.04).

The study concluded that Clozapine reduces the risk of mortality in patients who meet the criteria for TRS. Thus improving access to clozapine in TRS is likely to reduce the mortality gap in schizophrenia. [13]

A nationwide Finnish register-based cohort study of 62,250 patients showed the cumulative mortality rates during a maximum follow‐up of 20 years were 46.2% for no antipsychotic use, 25.7% for any antipsychotic use, and 15.6% for clozapine use. [Taipale H et al., 2020]

Even in patients where clozapine is discontinued for undefined reasons, clozapine (besides olanzapine) is the most effective and safest option. [Luykx J et al., 2020]

The concerns around the delay in initiation of clozapine have been debated for over a decade. Clinical practice, however, does not seem to have shifted. Could this clinician hesitation be costing patients their lives?

7. Do clinicians choose Polypharmacy over Clozapine?

8. Delay in clozapine and Outcome

Üçok A, et al. Delayed initiation of clozapine may be related to poor response in treatment-resistant schizophrenia. International Clinical Psychopharmacology. 2015

Demographic and clinical variables associated with response to clozapine in schizophrenia: a systematic review and meta-analysis.

11. Clinician hesitation prior to clozapine initiation: is it justifiable?

Patel, M. X. (2012). Clinician hesitation prior to clozapine initiation: is it justifiable?.

Luykx, J. J., Stam, N., Tanskanen, A., Tiihonen, J., & Taipale, H. (2020). In the aftermath of clozapine discontinuation: comparative effectiveness and safety of antipsychotics in patients with schizophrenia who discontinue clozapine. The British Journal of Psychiatry, 1-8.