There is an overlap between Long Covid and CFS / ME symptomatology.

One of the limitations of the Fukuda criteria is that some individuals who meet the criteria do not have core symptoms of the illness, such as post-exertional malaise, unrefreshing sleep, or memory/concentration problems. Its use is also prone to misdiagnosis or overdiagnosis.

EPIDEMIOLOGY OF CFS / ME

In 1934, a series of outbreaks of a previously unknown illness were recorded worldwide, which was initially confused with poliomyelitis but was eventually differentiated and became known as “epidemic neuromyasthenia”. [Parish, 1978]

Another outbreak occurred in Akureyri, Iceland, in 1946; the disease came to be called “Akureyri Disease”, or Icelandic disease, through much of the 1940s and 1950s.

In 1955, a similar outbreak in Royal Free hospital in London with 55 nurses, doctors, assistants, and other health personnel hospitalised with a series of symptoms after an upper airway infection before the onset of disease.

The term “benign myalgic encephalomyelitis” was chosen for the outbreak.

The World Health Organisation recognised ME in 1969.

In 1970, two psychiatrists in the United Kingdom reviewed the reports of 15 outbreaks of benign myalgic encephalomyelitis and concluded that these outbreaks: [McEvedy et al., 1970]

Were psychosocial phenomena caused by one of two mechanisms, either mass hysteria on the part of the patients or altered medical perception of the community.

This was reinforced by the European Psychiatric Society, who proposed myalgic encephalomyelitis was a psychosocial phenomenon caused by mass hysteria.

The above findings were refuted by Dr Melvin Ramsay, who then proposed the first diagnostic criteria for CFS. [Ramsay, 1988]

In 1987, the Centers for Disease Control and Prevention (CDC) convened a working group to reach a consensus on the clinical features of the illness. The first definition of CFS was published in 1988.

In 1994 Fukuda proposed a clinical and investigative protocol to be created in a comprehensive and integrated approach to study ME.

A recent review of case definitions highlighted the complexity and confusion around diagnosis, affecting prevalence rates depending on the diagnostic criteria used. [Lim & Son 2020]

The 8 definitions have 30 symptoms in the inclusion criteria that can be subcategorized into five groups: 9 neurologic, 6 neurocognitive, 2 neuroendocrine, 5 autonomic, and 7 immunologic symptoms.

In 2010, Jason and colleagues revised the CCC and provided explicit rules for applying this case definition, including a questionnaire for assessing symptoms. The Revised CCC was intended to better operationalize the CCC. [Jason et al, 2010]

This article will focus on the Revised Canadian Consensus Criteria, mainly due to its better specificity and inclusion of other organic conditions in the diagnosis.  It also can differentiate between chronic fatigue syndrome and depression as a cause of fatigue. [Bested & Marshall, 2015] 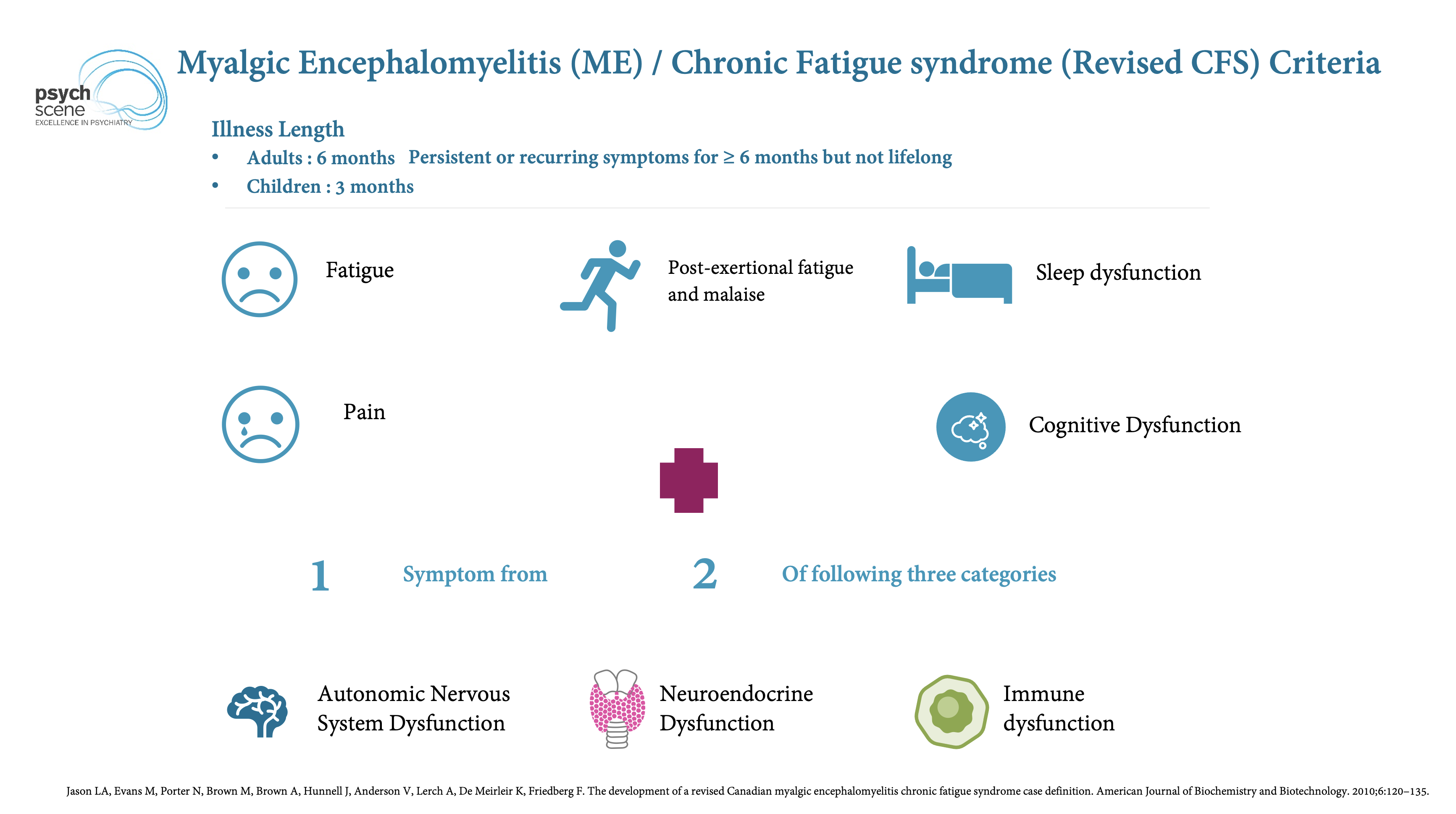 At least one symptom from two of the three following categories:

NEUROBIOLOGY | PATHOPHYSIOLOGY OF CFS / ME

Read more about the impact of stress on the HPA axis.

Read more about the Neurobiology of PTSD. 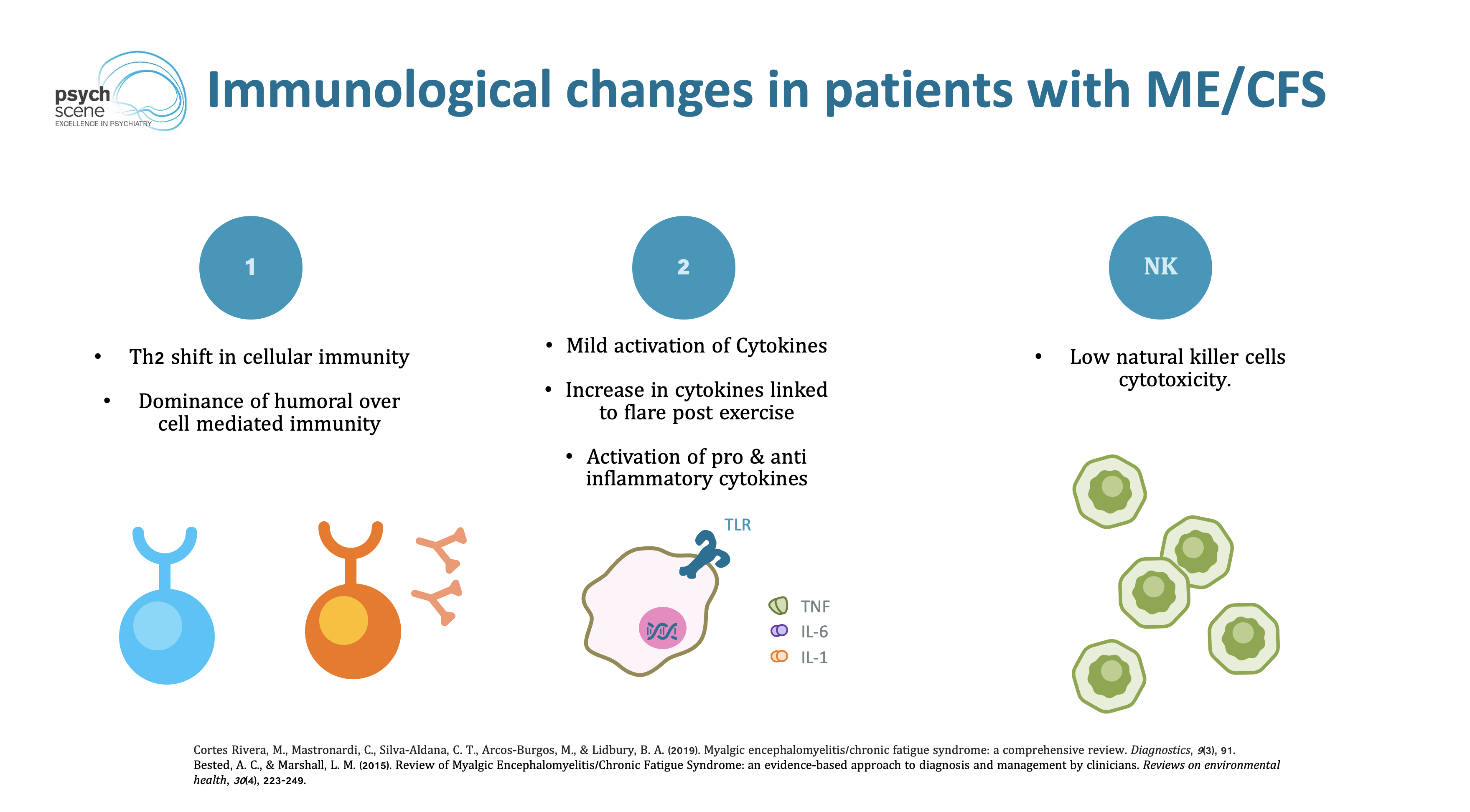 An imbalance between TH1 and TH2 immunity. 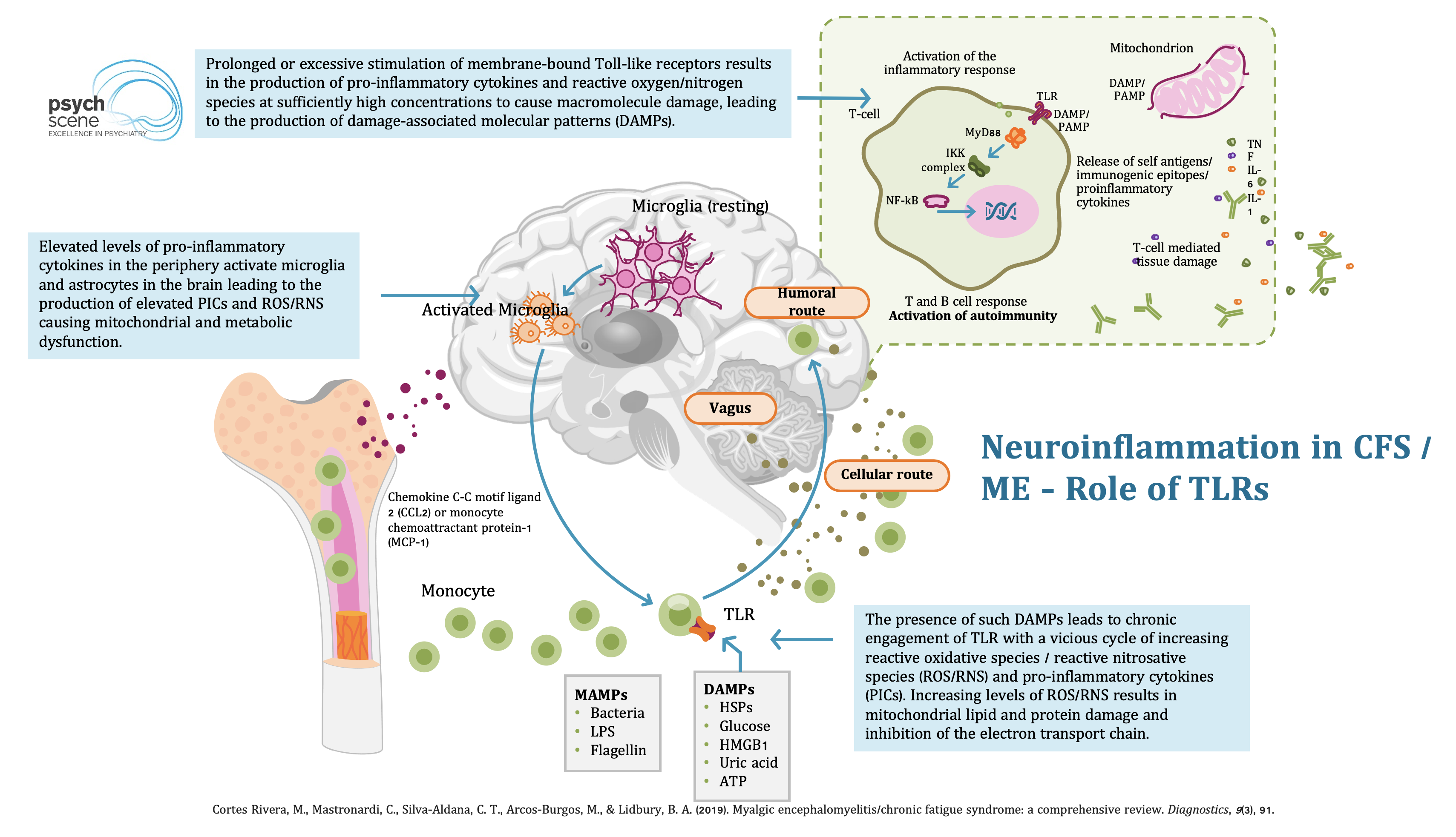 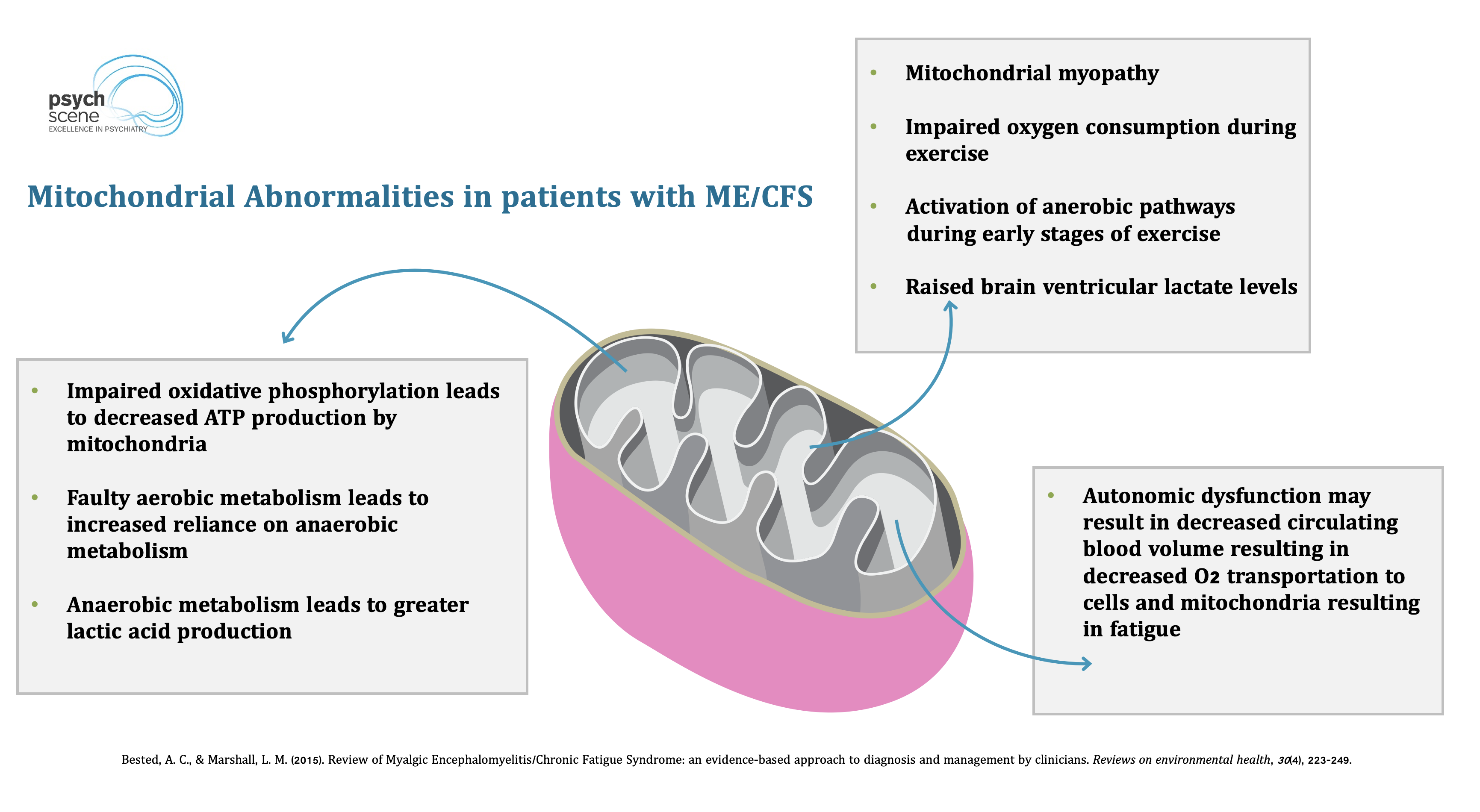 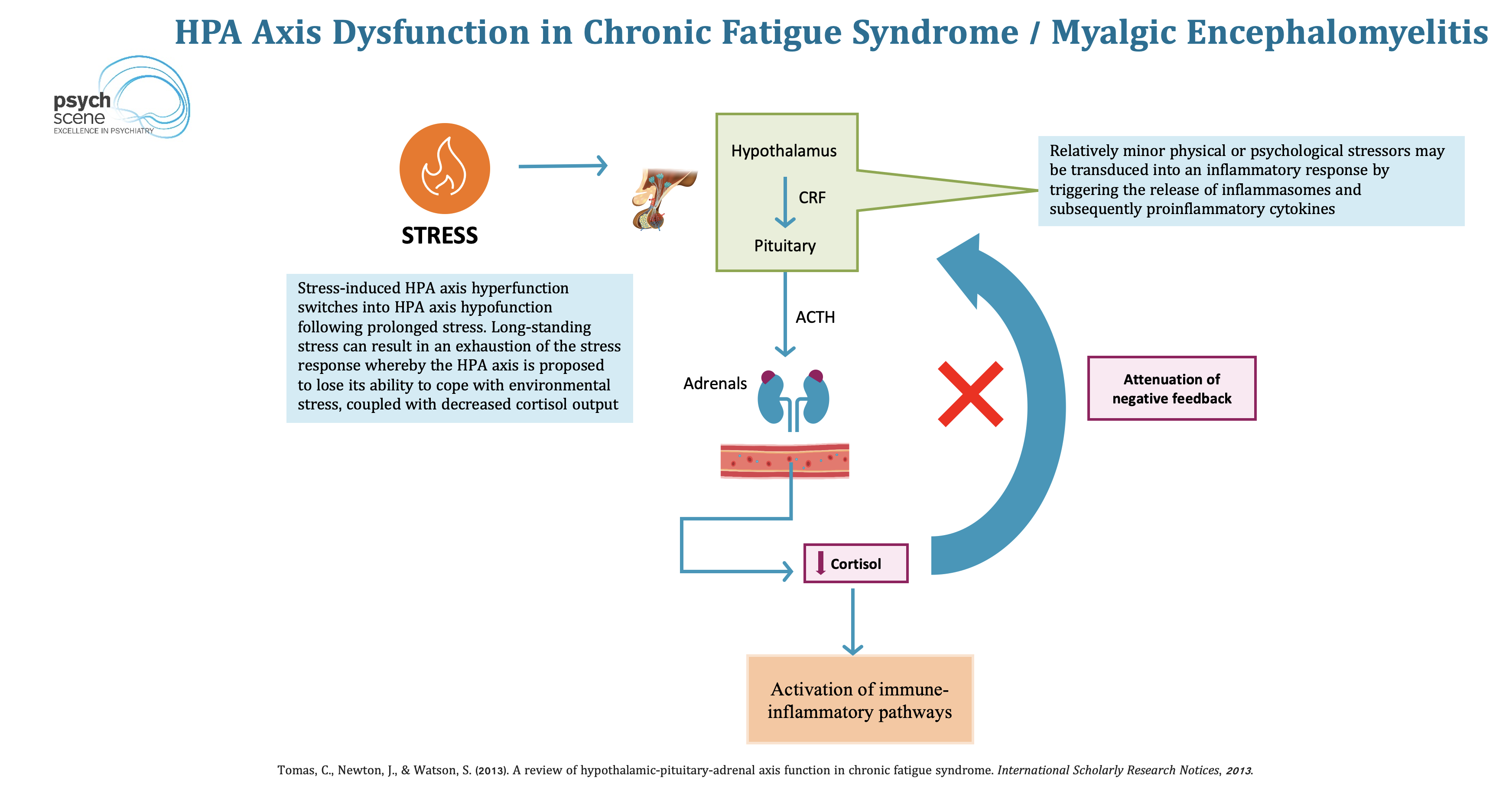 10. An imbalance between aerobic and anaerobic metabolism : 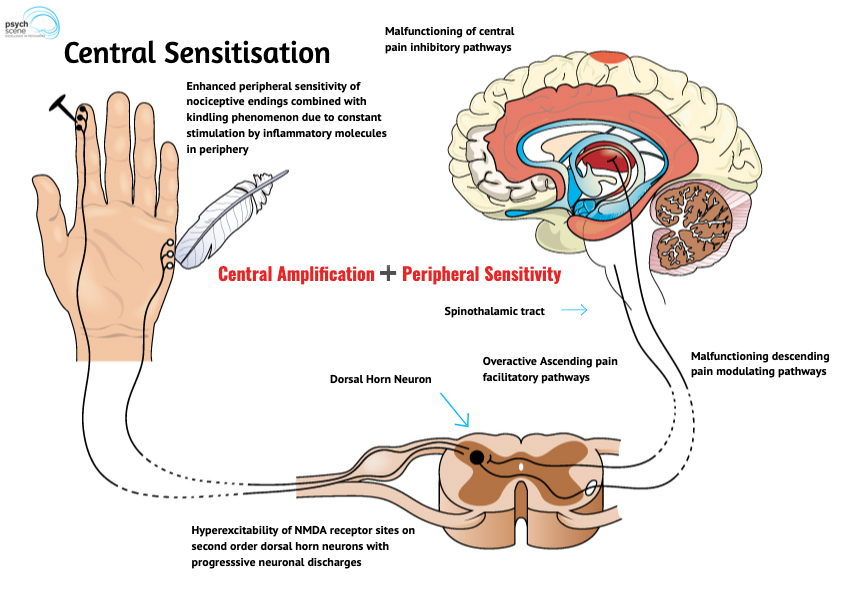 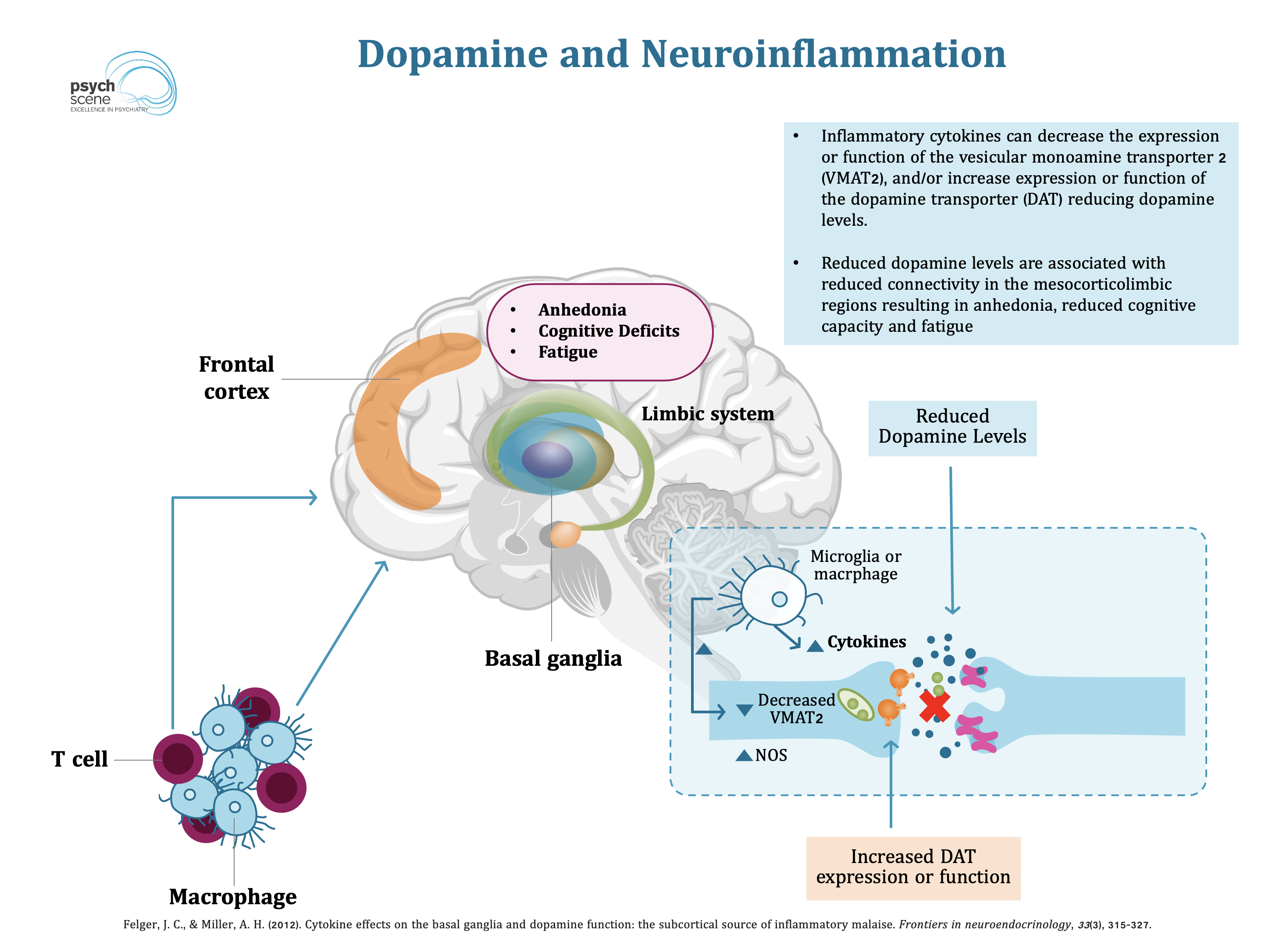 There are three key steps in the evaluation of CFS /ME

Fatigue, sleep disturbance, cognitive disturbance and pain may be caused by several medical conditions outlined in the table below. 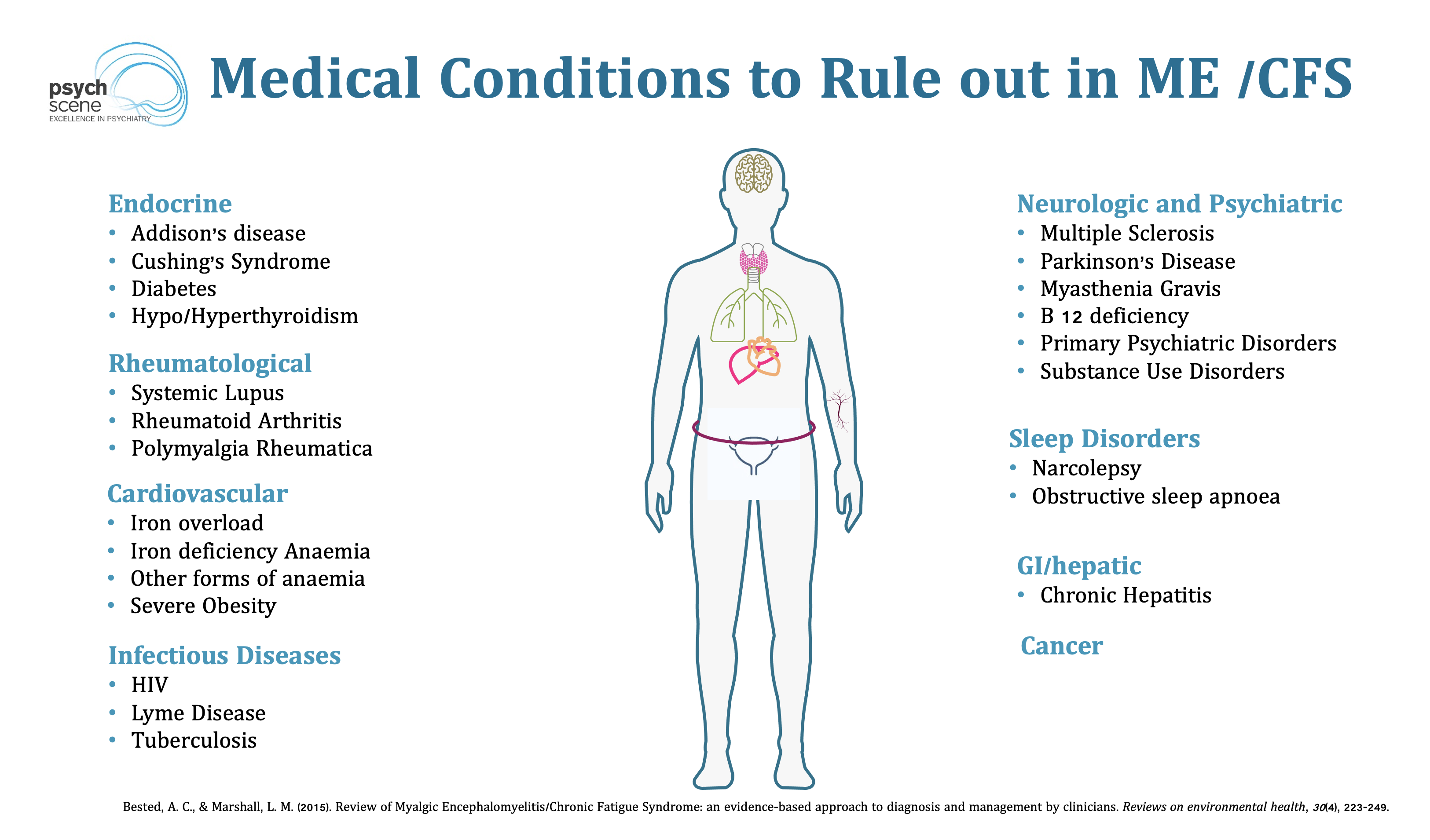 There is no blood test or specific biomarker to rule out ME or CFS.  However, the following tests may assist in diagnosing organic conditions that may have a cumulative effect on chronic fatigue syndrome. 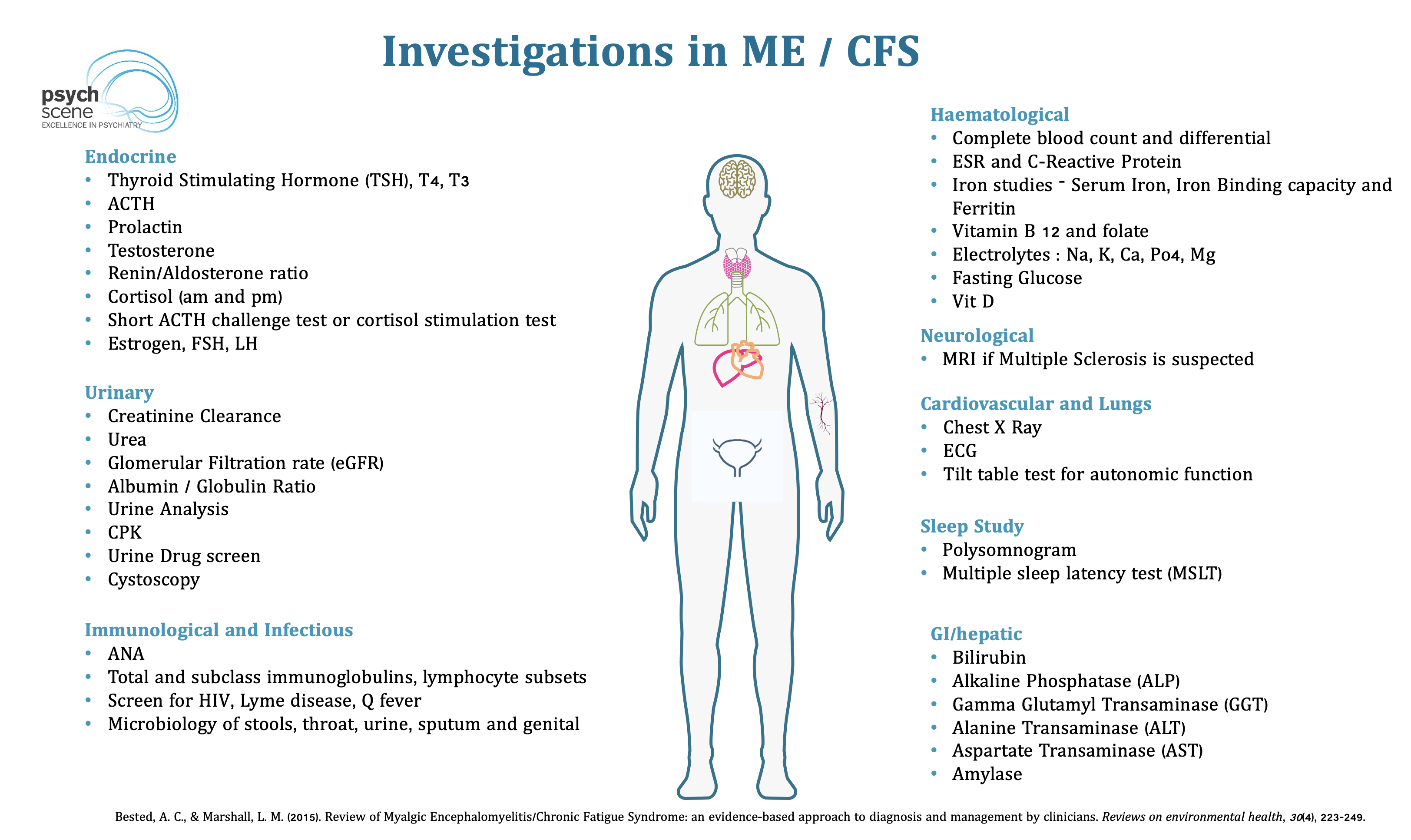 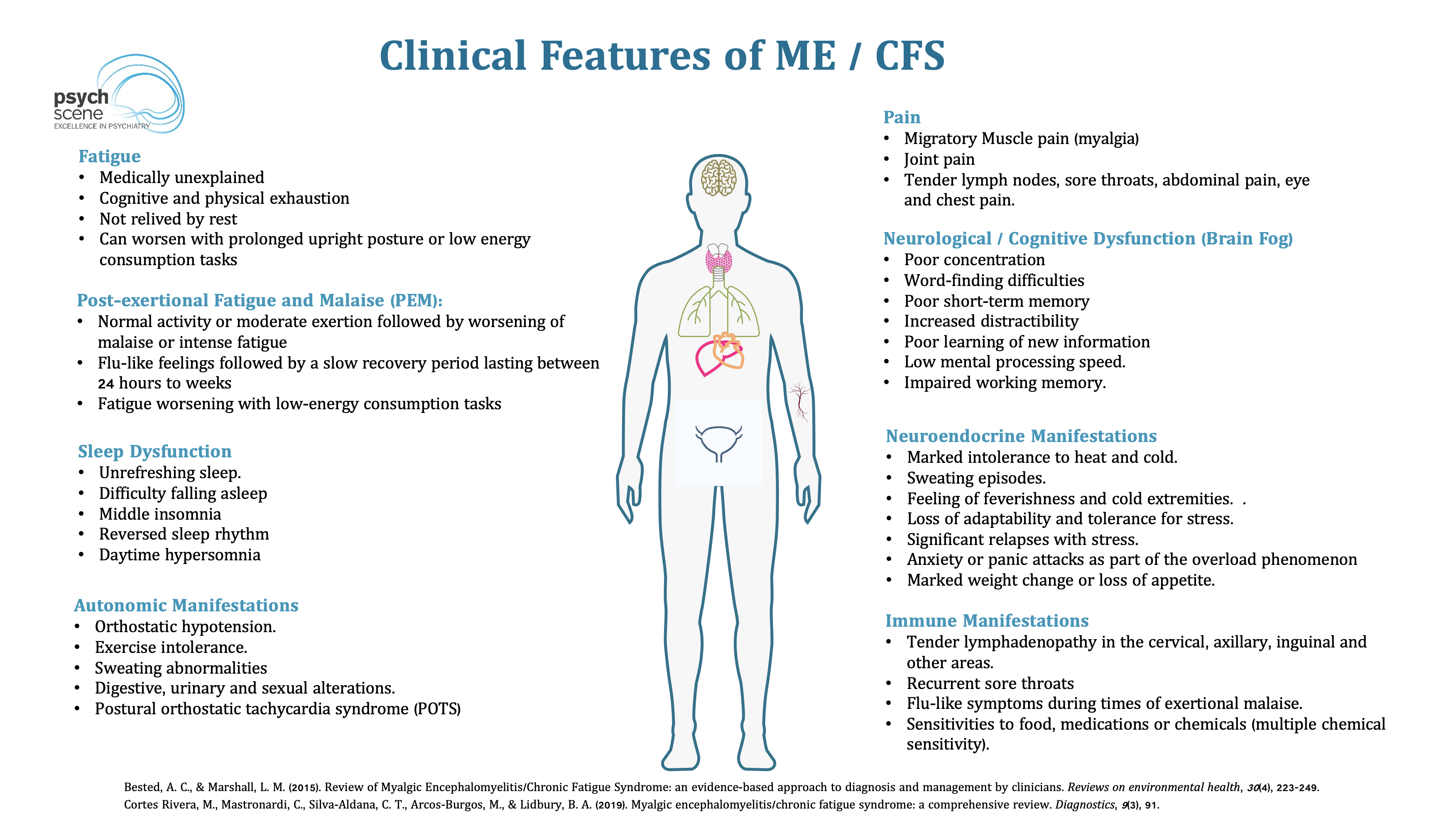 The following are clinical features with their descriptions

This particular criterion differentiates patients from fatigue due to depression. Depression patients feel better after exertion as exercise or physical activity acts as an antidepressant.

A 2-day CPET procedure can provide evidence of the pathophysiology across multiple systems that may not be apparent at rest by assessing the integrated response to exercise through a comprehensive evaluation of the pulmonary, cardiovascular, haematopoietic, neuropsychological and musculoskeletal systems. [Stevens et al., 2018]

A meta-analysis showed a significant alteration of workload at VT, especially on the 2nd day of CPET in ME/CFS patients providing support of a link between PEM symptom and alterations in metabolism and mitochondrial ATP production in ME/CFS. [Lim et al, 2020]

Read more on neurobiology, diagnosis and management of insomnia

Other cognitive and neurological difficulties may include: 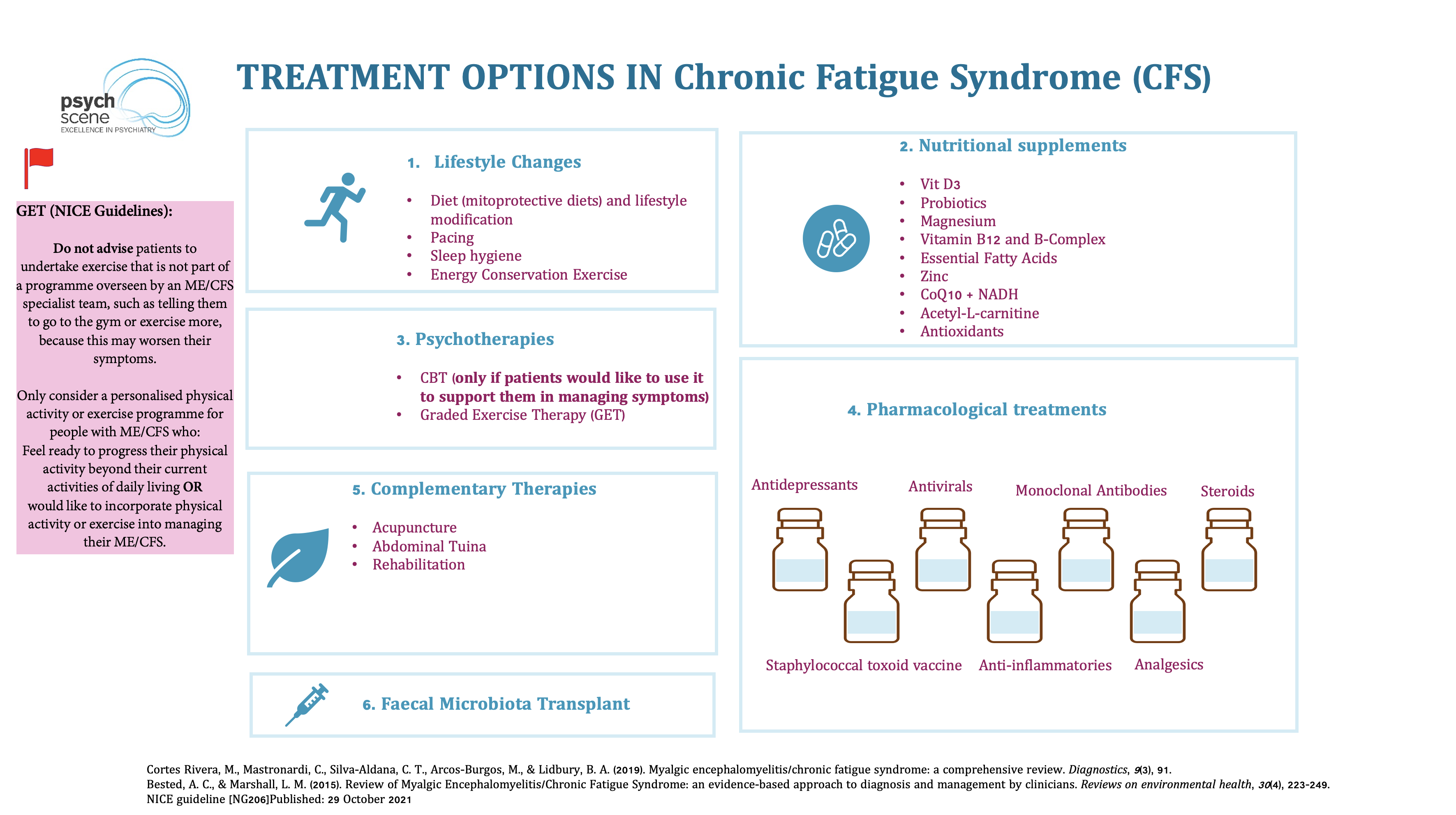 NON-PHARMACOLOGICAL MANAGEMENT OF CFS / ME

Do not advise people with ME/CFS to undertake exercise that is not part of a programme overseen by an ME/CFS specialist team, such as telling them to go to the gym or exercise more, because this may worsen their symptoms.

Tell people about the risks and benefits of physical activity and exercise programmes. Explain that some people with ME/CFS have found that they can make their symptoms worse, for some people it makes no difference and others find them helpful.

If a physical activity or exercise programme is offered, it should be overseen by a physiotherapist in an ME/CFS specialist team.

Pacing has consistently been shown to be the most effective, safe, acceptable and preferred form of activity management for CFS/ME. It should therefore be a key component of any illness management programme.[ME Association, 2015]

The PACE trial (Pacing, graded activity, and cognitive behaviour therapy), which was a large scale 5 year trial of treatment for CFS from 2005 to 2010, funded by the UK Government at the cost of £5 million, found that both CBT and GET, when given appropriately as supplements to specialist medical care, are more effective in improving both fatigue and physical functioning in people with CFS, than are Adaptive pacing therapy (APT) and Specialist medical care (SMC) alone. [White et al., 2011 ]

The ME association patient survey concluded: [ME Association, 2015]

PHARMACOLOGICAL MANAGEMENT OF CFS / ME

A systematic review of the pharmacological management of ME/CFS identified 20 drug therapies from 26 studied, and 18 applied the Fukuda criteria as the primary tool for inclusion criteria. [Collatz et al., 2016]

11 medications were shown to be either slightly, mildly or moderately effective in the respective study groups.  6 out of 11 of them had significant results in the fatigue outcome. No medications showing a significant effect to be considered a gold standard in the pharmacological treatment of ME/CFS.  Since there are multiple mechanisms, several pharmacological therapies may be used to treat ME/CFS.

However, there was no effective intervention with coherence and reproducibility. [Kim et al., 2020]. 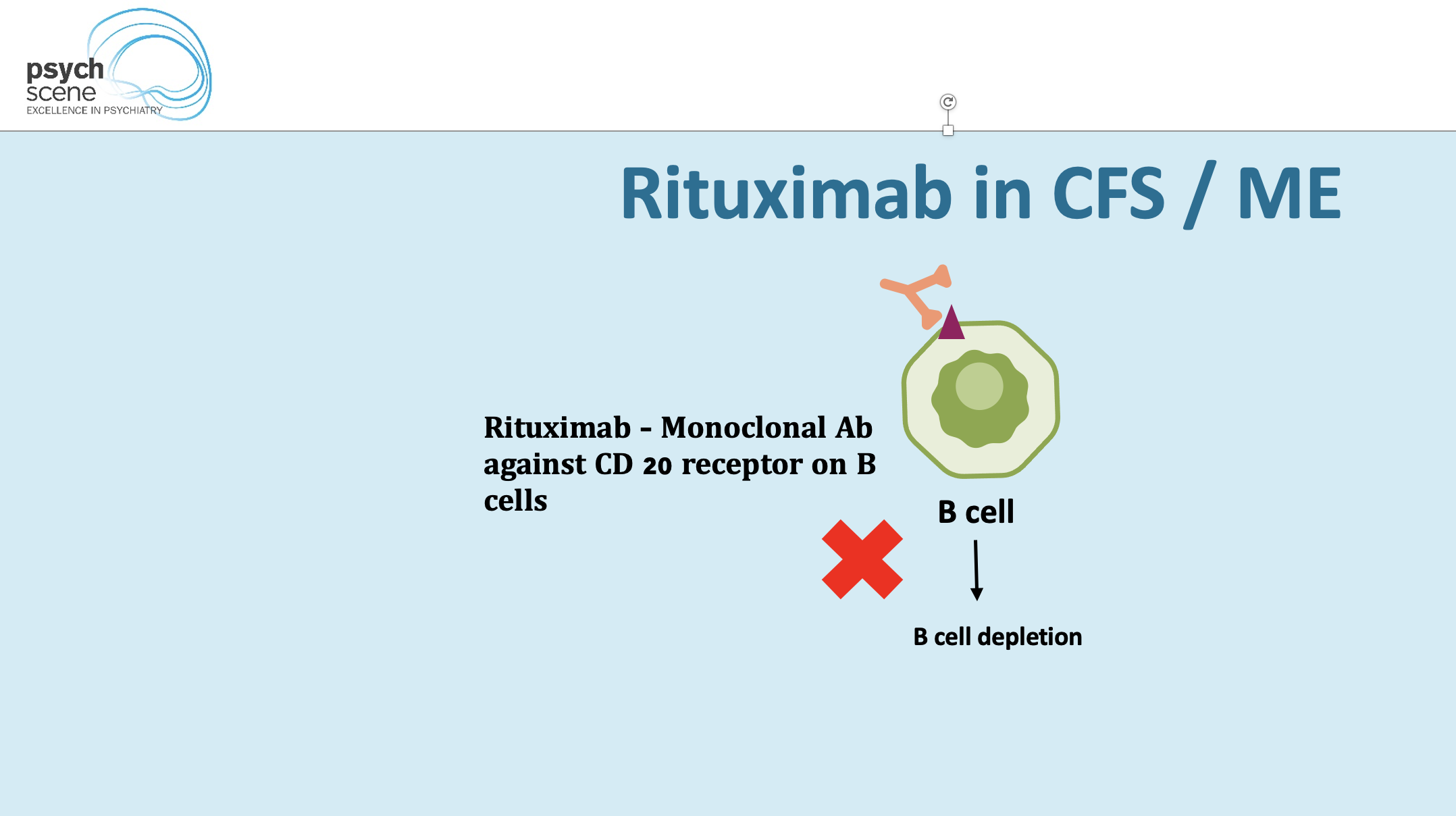 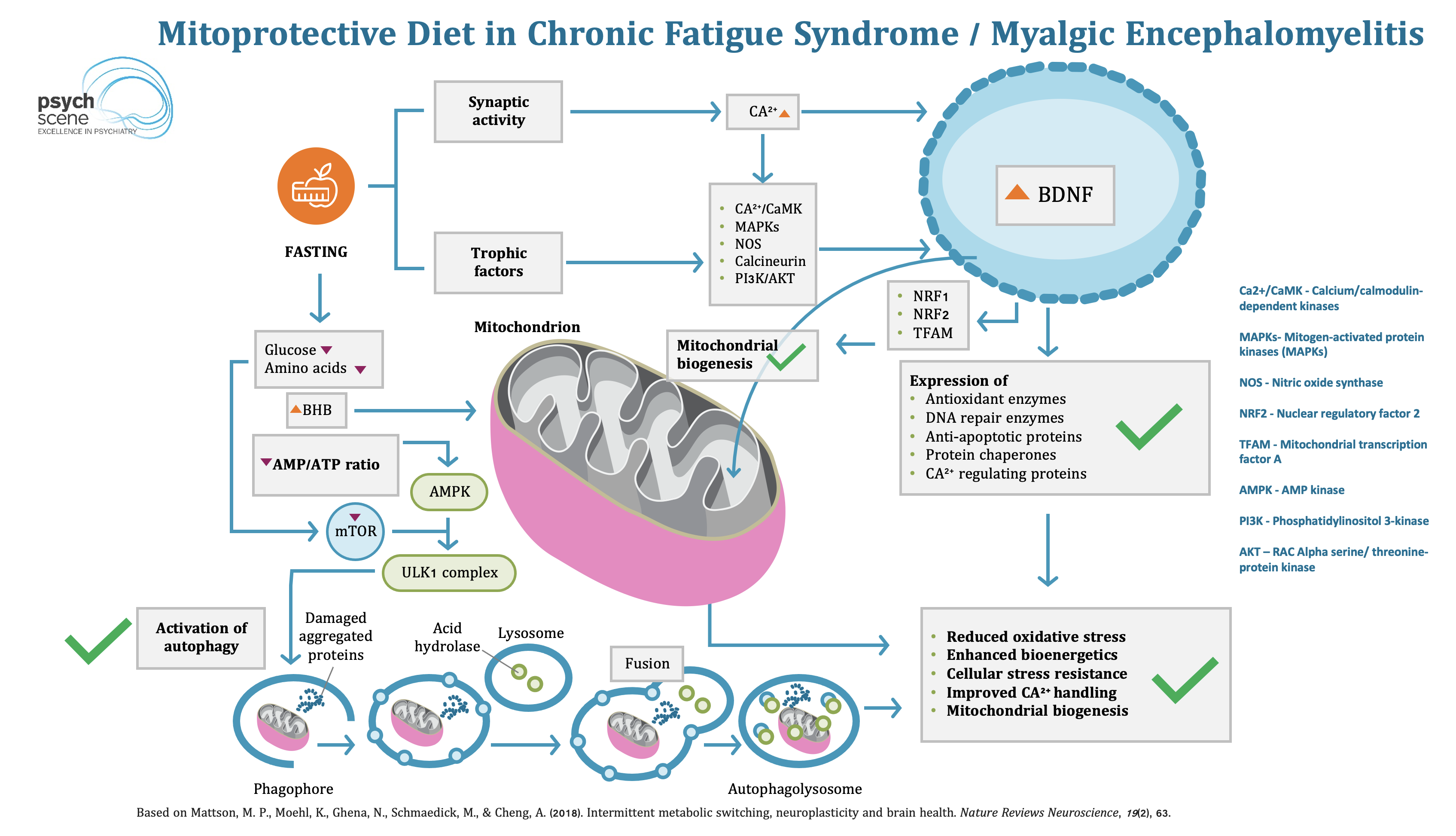 Whilst there has been some benefit in some patients, they are not beneficial for all patients and may not contribute to the complete recovery of the disease due to other mechanisms involved. 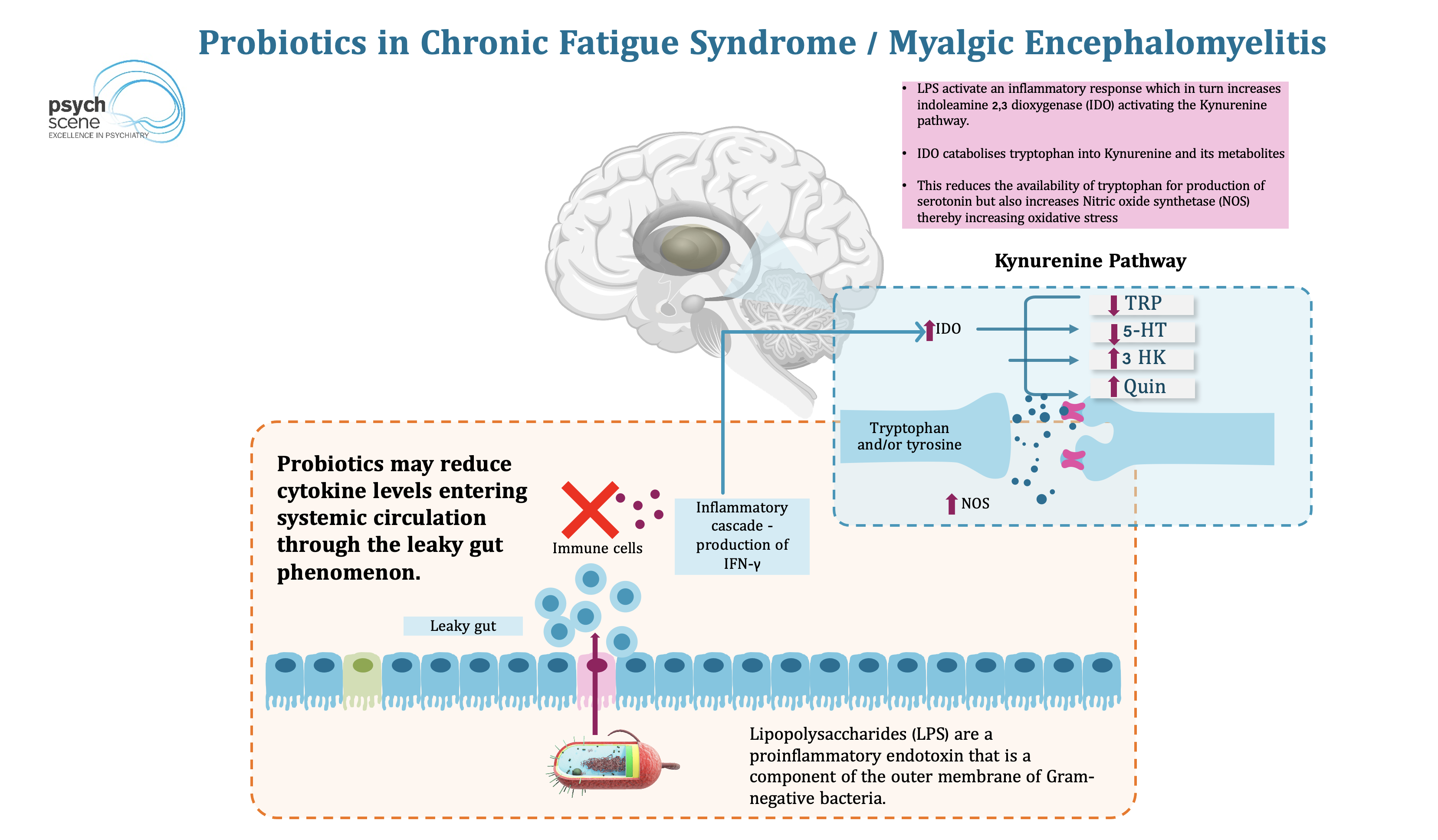 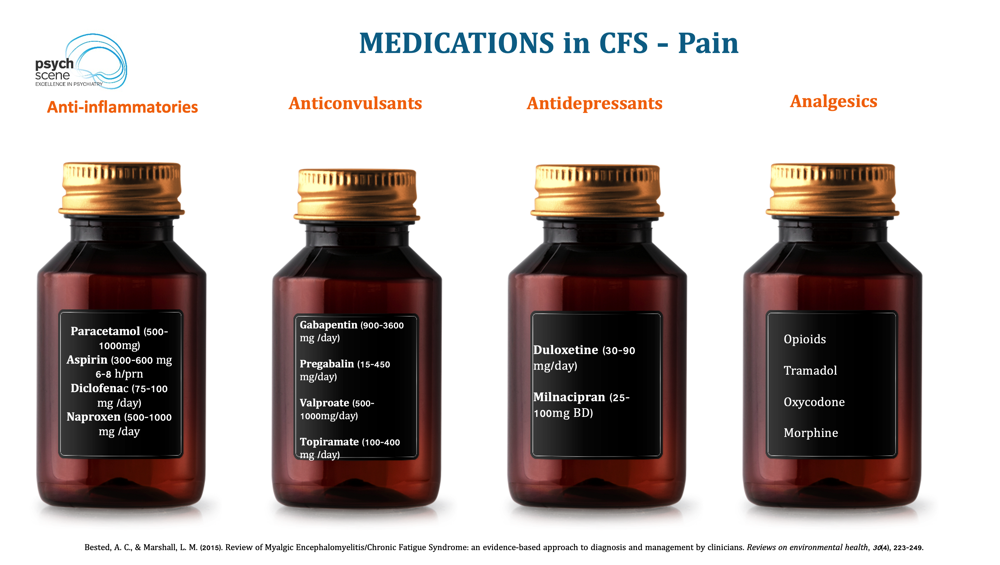 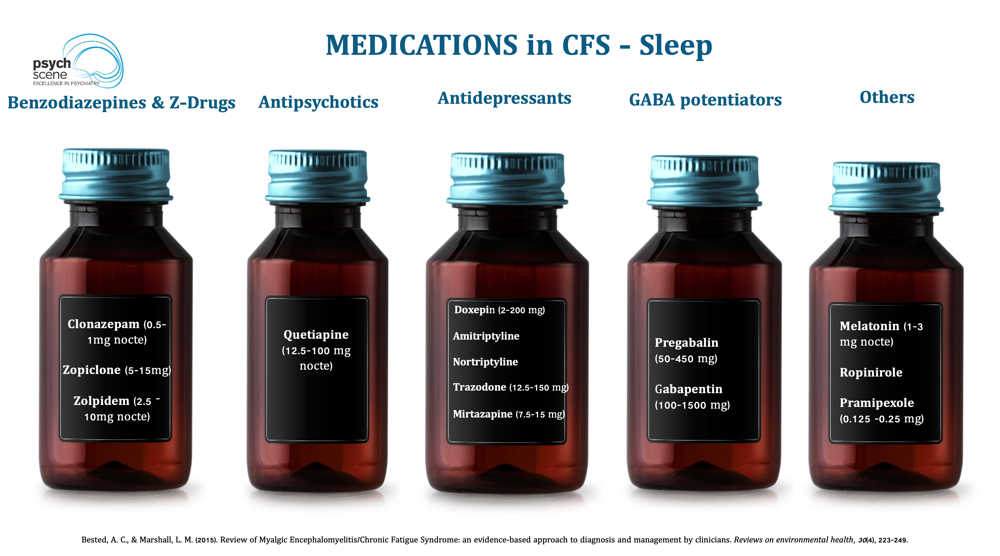 The management of ME/CFS continues to remain a challenge in medical and psychiatric practice.  There are many pathophysiological mechanisms involved, which requires a targeted strategy targeting multiple mechanisms.

Due to the unclear aetiology, diagnostic uncertainty and resultant heterogeneity, there are no established recommendations in clinical practice or guidelines.

In practice, pharmacological and non-pharmacological treatments are used in the treatment of ME/CFS.  More research is required to understand the pathophysiology and, therefore, allow the development of more effective treatments to improve the quality of life for patients with ME/CFS.

The Chronic Fatigue Syndrome: A Comprehensive Approach to Its Definition and Study

A systematic review describing the prognosis of chronic fatigue syndrome

An outbreak of encephalomyelitis in the royal free hospital group, London, in 1955

The definitive description of ME (Ramsay)

Review of Myalgic Encephalomyelitis/Chronic Fatigue Syndrome: an evidence-based approach to diagnosis and management by clinicians

Evidence for a heritable predisposition to Chronic Fatigue Syndrome

Cytokine effects on the basal ganglia and dopamine function: the subcortical source of inflammatory malaise.

The Prospects of the Two-Day Cardiopulmonary Exercise Test (CPET) in ME/CFS Patients: A Meta-Analysis.

Results and In-depth Analysis of the 2012 ME Association Patient Survey Examining the Acceptability, Efficacy and Safety of Cognitive Behavioural Therapy, Graded Exercise Therapy and Pacing, as Interventions used as Management Strategies for ME/CFS

Results and In-depth Analysis of the 2012 ME Association Patient Survey Examining the Acceptability, Efficacy and Safety of Cognitive Behavioural Therapy, Graded Exercise Therapy and Pacing, as Interventions used as Management Strategies for ME/CFS.

Can patients with chronic fatigue syndrome really recover after graded exercise or cognitive behavioural therapy? A critical commentary and preliminary re-analysis of the PACE trial.

Treatment and management of chronic fatigue syndrome/myalgic encephalomyelitis: all roads lead to Rome

Chronic fatigue syndrome: 3 cases and a discussion of the natural history of attention-deficit/hyperactivity disorder

Does methylphenidate reduce the symptoms of chronic fatigue syndrome?

Low-dose naltrexone as a treatment for chronic fatigue syndrome.

Normalization of leaky gut in chronic fatigue syndrome (CFS) is accompanied by a clinical improvement: effects of age, duration of illness and the translocation of LPS from gram-negative bacteria

Maes M, Leunis JC. Normalization of leaky gut in chronic fatigue syndrome (CFS) is accompanied by a clinical improvement: effects of age, duration of illness and the translocation of LPS from gram-negative bacteria. Neuro Endocrinol Lett 2008;29(6):902–10.

What is brain fog? An evaluation of the symptom in postural tachycardia syndrome.

Hemodynamic profiles and tolerability of modafinil in the treatment of postural tachycardia syndrome: a randomized, placebo-controlled trial.