The concept of catatonia was first described by Kahlbaum (1874). Catatonia is a psychomotor syndrome that occurs in 9 to 17% of patients with an acute psychiatric disorder. [Rosebush et al 1990; Francis et al 2010] Catatonic stupor is the most recognisable presentation however immobility, mutism, staring, and rigidity are common clinical signs of catatonia.

Catatonic patients are at risk of multiple life-threatening complications and therefore rapid treatment is required particularly before any treatment is initiated for the primary medical concern.

For instance, neuroleptic malignant syndrome is a serious complication that can develop if catatonia is left untreated and has a mortality rate of approximately 10%. [Strawn et al 2007]

The neurobiology of catatonia is believed to originate in disturbances in GABA, glutamate, and dopamine signalling, which are hypothesised to underlie the behavioural, motor, cognitive, and affective symptoms of catatonia [Northoff 2002]:

The classical clinical feature of catatonia is stupor, which is characterised by immobility and mutism. Another classic symptom is posturing, whereby the patient positions themselves in an uncomfortable position against gravity with complete akinesia.

Catatonia is an identifiable syndrome that is well characterised and defined in the DSM-V as a separate clinical diagnosis to schizophrenia. [APA 2013] 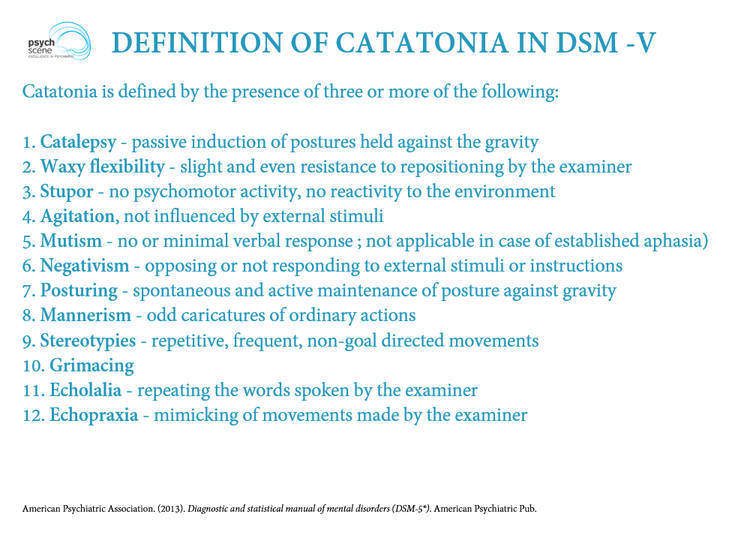 Although the catatonic subtype of schizophrenia has been deleted from the DSM, catatonia is still included as a specifier for schizophrenia and major mood disorders (bipolar disorder, major depressive disorder, and other mental, and neurodevelopmental disorders).

A new residual diagnostic category of catatonia not otherwise specified (NOS) is added in patients with psychiatric conditions other than schizophrenia or mood disorders or when the general medical condition is not immediately recognised. [Luchini et al. 2015]

There are several proposed classifications of catatonia, which is outside the scope of this article. For further reading, please refer to Luchini F et al., 2015

Taylor and Fink proposed that catatonia should be classified as an independent entity with three subtypes:[Taylor and Fink, 2003]

One key difference highlighted between NMS and catatonia is that malignant catatonia starts with psychotic excitement while NMS starts with severe extrapyramidal muscular rigidity.

It is important to rule out organic causes:

Catatonia presents with a range of clinical signs that are relatively non-specific.

The video below shows the signs of waxy flexibility, forced grasping, opposition, negativism and aversion. 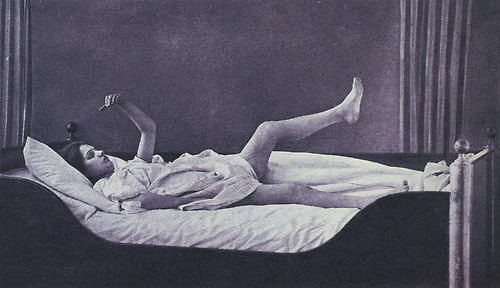 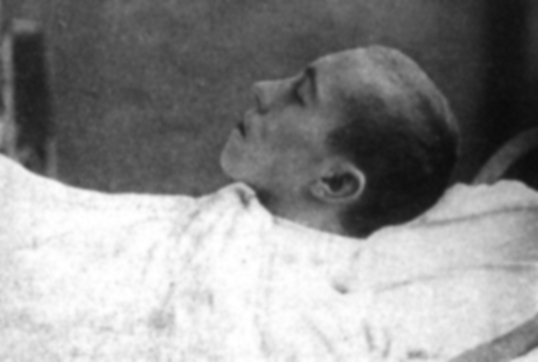 Catatonia is often confused with a variety of other conditions that have signs that are similar to catatonia, although the full clinical picture is normally distinguishable: [Bahti et al. 2007; Rasmussen et al. 2016]

Further investigations (depending on findings on physical examination) 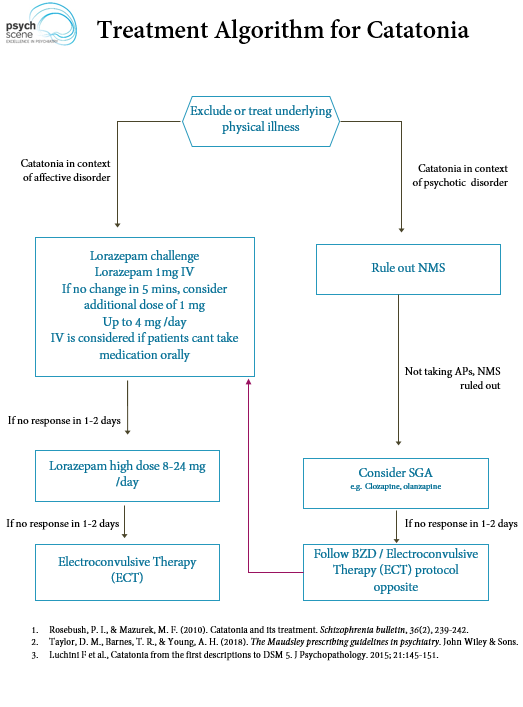 BZD and ECT combined can have a synergistic effect.

Alternative treatments such as aripiprazole (partial dopamine agonist), has the potential to be marginally effective however more research is required as most of the data is based on case reports. [Muneoka et al 2017]

High potency antipsychotics should be avoided, however, second-generation antipsychotics may be used to treat comorbid psychosis, which has also been shown to be effective in treating acute catatonia. [Hesslinger et al 2001] 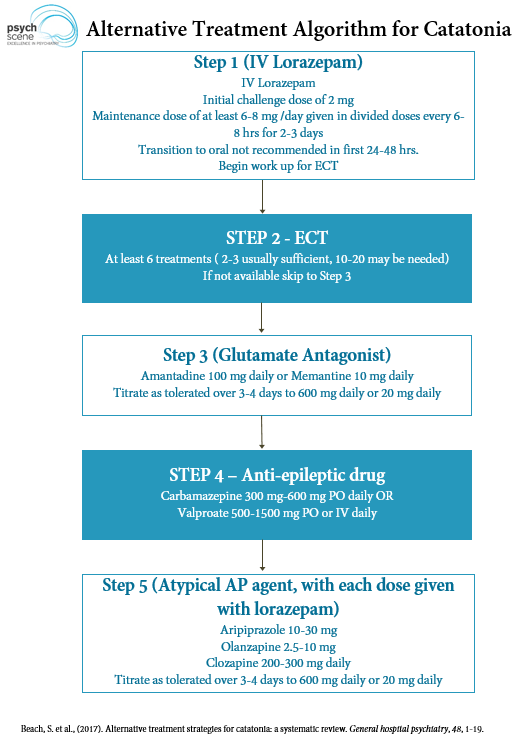 Below is another clinical algorithm by Dr Tyler Black. 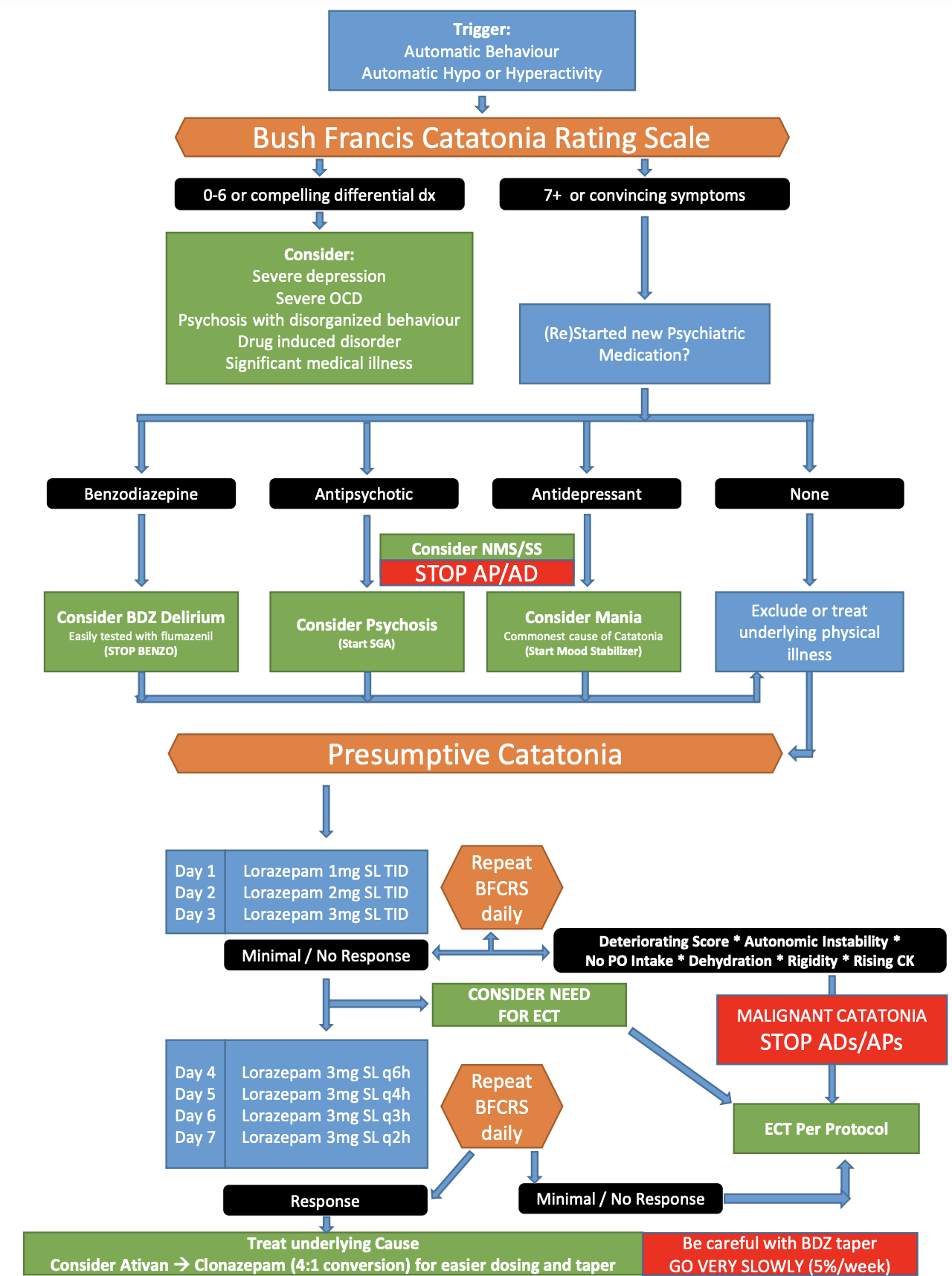 Catatonia is a common syndrome in psychiatric patients and the symptoms and signs of catatonia require careful assessment so that the correct treatment strategy is engaged without delay to avoid precipitating neuroleptic malignant syndrome or severe medical complications.

ECT and/or benzodiazepines are safe and effective interventions with the majority responding to BZDs. Once catatonia is resolved, treatment of the underlying psychiatric or medical illness should begin.

What catatonia can tell us about “top-down modulation”: A neuropsychiatric hypothesis

‘Scared stiff’: catatonia as an evolutionary based fear response

Catatonia in psychiatric classification: a home of its own

Catatonia from the first descriptions to DSM 5

The Probability That Catatonia in the Hospital has a Medical Cause and the Relative Proportions of Its Causes: A Systematic Review

Oldham MA. The Probability That Catatonia in the Hospital has a Medical Cause and the Relative Proportions of Its Causes: A Systematic Review. Psychosomatics. 2018 Jul-Aug;59(4):333-340

Catatonia: Our current understanding of its diagnosis, treatment and pathophysiology

Catatonia in 26 patients with bipolar disorder: clinical features and response to electroconvulsive therapy

Acute and long-term treatment of catatonia with risperidone

Hesslinger B et al., Acute and long-term treatment of catatonia with risperidone. Pharmacopsychiatry. 2001;34(1):25-26.