Body dysmorphic disorder (BDD) is an oft under-recognised psychiatric disorder which can have dreadful outcomes for patients, including social isolation, lack of work and relationships, as well a high risk of depression and suicide.

BDD is characterised by an overconcern with physical appearance such that an appearance ideal becomes the overwhelming and all-pervasive concern.

If there is a small objectively identifiable cosmetic problem, the BDD patient has a view of it that is both distorted and catastrophic; more often there is no objective cosmetic problem at all, yet the patient ‘sees’ the problem and cannot accept that others cannot. This is not mere vanity, nor are people with BDD attention-seeking: rather, they tend to be ashamed, reclusive and have low self-worth.

BDD is associated with three degrees of insight:

Included within BDD is muscle dysmorphia where the individual is preoccupied with the idea that his/her body is too small or insufficiently muscular.

The mean age of onset on BDD is in the teens, albeit many patients in retrospect give a history even in childhood, of sensitivity regarding appearance.

Usually, the concern grows and builds insidiously, expressly during the teen phase of development when sexual interests and puberty starts.

Sometimes it can have an abrupt onset, with some patients giving a vivid account of their appearance concern beginning in the context of teasing: but these individuals usually have appearance concerns and other sensitivities antedating the actual onset of ‘disorder.’

Interestingly the rates of BDD are roughly equal in males and females, albeit the focus of concern varies slightly between the sexes, with baldness, in particular, being usually a male issue.

But truly any aspect of appearance can be the focus: skin (too pale, too dark, too red, too blotchy, too wrinkled), hair (too much, too little, too black, too red, too thin, too thick) and face are common targets. Curiously some patients have a focus on body parts that are usually hidden: the labia in women and the penis in men, for example.

Like in much of psychiatry, differentiating between ‘usual’ appearance concerns and BDD can be difficult on the edges, albeit as a ‘full blown’ disorder is obvious and can be associated with extreme distress and disability.

Some people with BDD have a great deal of self-disregard and ‘hate’ aspects of how they look, but still, manage to live fulfilling lives and conduct successful careers.

One patient described how her work entailed giving public presentations and how she had to induce a state of near-derealisation to get through these events; she could also enter a lift walled with mirrors and simply not ‘see’ herself.

More commonly, people with BDD so hate public scrutiny that they avoid performance situations, and there is not surprisingly high comorbidity with social anxiety disorder.

Indeed, more severe BDD can lead to almost total withdrawal from society, with the individual becoming housebound or venturing forth only to places they see as ‘safe’ (e.g., darkened cafés or nightclubs) and even then adapting various forms of camouflage such as dark glasses, hats, scarves and concealing clothing.

Usually, beaches and swimming pools are avoided altogether, and many patients have difficulty with sexual intimacy, insisting on the room being pitch dark or even the sexual partner having to close their eyes or put on a blindfold.

THE MIRROR AS THE WORST ENEMY

The mirror is the BDD patient’s worst enemy. There are two main patterns of mirror interaction, albeit they can occur together at a different time in the same person.

The first pattern is avoidance, where the person will go to all lengths to avoid seeing themselves in a mirror or other reflecting surface: covering over all the mirrors in the house and/or only showering in the dark, are common strategies.

The second pattern is one of intense self-scrutiny in the mirror, with hours being spent each day looking at oneself in the mirror, often adopting different angles and postures, different lighting and undertaking extensive make-up and /or hair grooming routines that follow a prescribed pattern which must be followed to the letter or risk having to start all over again.

Although many BDD patients are very secretive about their problem, reassurance-seeking from others is not unusual, as is a comparison with others, including images in magazines and on TV.

As people with BDD see themselves as having a cosmetic rather than psychological or psychiatric ‘problem,’ it is hardly surprising that many attend cosmetic specialists, arguably feeding and being exploited by an insatiable industry targeting looks.

In the general population, around 1 in 50 people might have BDD; estimates in cosmetic specialities is seven to 10-fold that estimate. And it is not unusual for BDD patients to have numerous cosmetic procedures, none of which (by definition) are enduringly a ‘solution.’

CLINICAL MANAGEMENT OF BDD - THE SOLUTION

Raising public awareness about BDD is crucial, as is targeted information for cosmetic specialists, who should have a high sensitivity regarding BDD patients and who should screen patients in whom alarm red flags arise. Red flags include:

Should the individual meet criteria for BDD, the next task is to persuade them that they cannot expect to achieve a cosmetic ‘solution’ and that they should seek expert psychological and psychiatric advice to tackle their issues efficiently.

This can be a difficult as individuals with BDD find it very difficult to conceptualise their problems in any other way than a cosmetic one. Re-framing can be effective, in terms of helping them accept help for their distress, anxiety, and depression, along with a plan to tackle their avoidance behaviours and time-consuming and impairing rituals.

There is a paucity of controlled treatment trials in BDD. Phillipou et al. (2017) have recently reviewed the published literature, as summarised in the table below.

Established psychological therapies for BDD include exposure/response prevention (EX/RP) and cognitive-behavioral therapy (CBT). Some component of EX/RP is certainly required, to alter the patterns of avoidance (e.g. of social situations) and rituals related to ‘concealment’ (e.g., make-up, hats, scarves).

This should all be done in a step-wise hierarchical manner. The mirror is a particular focus, given the prominence of reflecting surfaces in the lives of people with BDD, and the divergent approaches to them outlined above.

A ‘normalisation’ approach is usually the most effective way of engagement with the individual, regarding the mirror: thus treading a line between total avoidance and obsessive rituals. 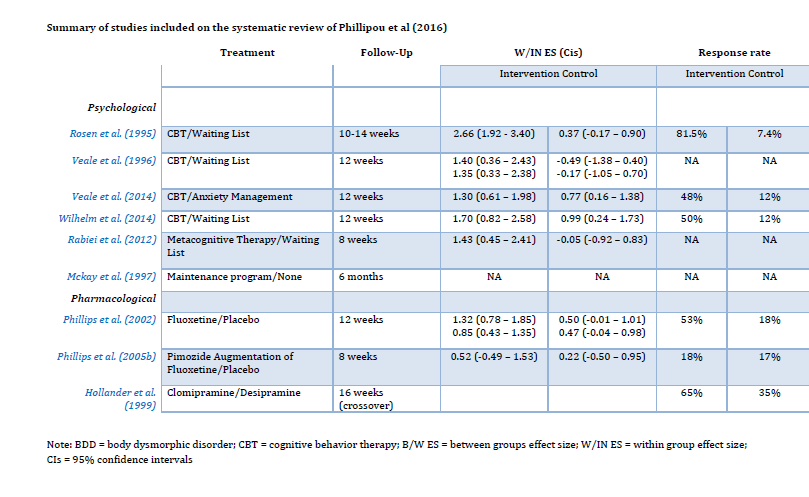 Cognitive elements are usually employed as an adjunct to EX/RP in clinical practice, albeit the research literature does not show any major advantage for the addition of the cognitive element.

In BDD, many of the cognitive ‘thinking traps’ relate to how people perceive others will perceive and judge them: in this way it is not unlike social anxiety disorder (SAD), but the primary concern is how one looks, in BDD; and how one behaves, in SAD.

This is an important distinction in therapy. A deeper exploration of underlying assumptions and cognitive distortions are part and parcel of the cognitive work in BDD.

Relatively novel psychological approaches to BDD include acceptance-commitment therapy (ACT), which is often a ‘softer’ approach than standard CBT and can effectively engage people who find the CBT cognitive challenges too confronting.

Another strategy that is beginning to be articulated and integrated into treatment is directly dealing with the aberrant visual issues associated with BDD.

In brief, people with BDD tend to:

Helping people with BDD understand these predilections and then address them, using computer-generated images along with visual gaze retraining, has potential therapeutic values as an adjunct to the more mainstream approaches outlined above (see Rossell et al., 2015).

The other main arm of therapy is that of pharmacology. Here the serotonergic antidepressants (SSRIs) have gained ascendancy, with higher doses often being required than in treating primary depression: in this respect, BDD is similar to obsessive-compulsive disorder (OCD). Learn more about the clinical management of OCD.

As in OCD, SSRIs serve to ameliorate, rather than obliterate, BDD symptoms. As such, adjunctive psychological therapy is vital. Also, there is often a requirement for adjunctive use of other psychopharmacological agents: this is common in clinical practice but the research evidence base for any given approach is very slight (see Table 1 previously). Read more about the commonly used antidepressants.

Perhaps most common would be the use of adjunctive antipsychotics, again not dissimilar to OCD. There is little to guide when to employ such agents and which to use, but common sense suggests a more sedative anxiolytic type atypical drug such as quetiapine in patients with arousal and insomnia; and one of the dopamine partial agonists (aripirazole, brexpiprazole) in individuals with pervasive apathy and depression and/or concern with weight gain and other metabolic burden.

Of interest is that, even if BDD patients hold their beliefs with delusional conviction (and that is the case in around half of the clinical samples), antipsychotics alone do not benefit them and core pharmacological therapy remains the SRIs.

Other adjunctive agents that can be helpful in some BDD patients include clonazepam and buspirone. Of course, such adjunctive medications are all ‘off label’ and require full informed consent from the patient and careful monitoring of any untoward side effects.

In conclusion, BDD is a not uncommon but severely distressing and disabling psychiatric illness.

It requires detection and sensitive engagement of patients in a treatment plan the encompasses a moratorium on cosmetic procedures, and psychological therapy along with targeted psychopharmacology.