We previously covered antidepressant withdrawal. Antipsychotic withdrawal can pose similar challenges. Despite the challenges and a serious risk of relapse, there are no clear guidelines on managing antipsychotic discontinuation and dose reduction. [Shimomura et al. 2020]

Most guidelines recommend continuous therapy after a first psychotic episode to prevent a recurrence; however, some studies have questioned this approach. [Wunderink et al 2013]; [Harrow et al 2017]

Abruptly stopping antipsychotic therapy comes with a high risk of withdrawal symptoms that include a variety of somatic, motor, and psychological symptoms. [Chouinard et al. 2017]

Depending on the antipsychotic drug’s target receptor, both first and second-generation antipsychotics [Read mechanisms of action of antipsychotics] can be associated with the following clinical features:  [Horowitz et al 2021] 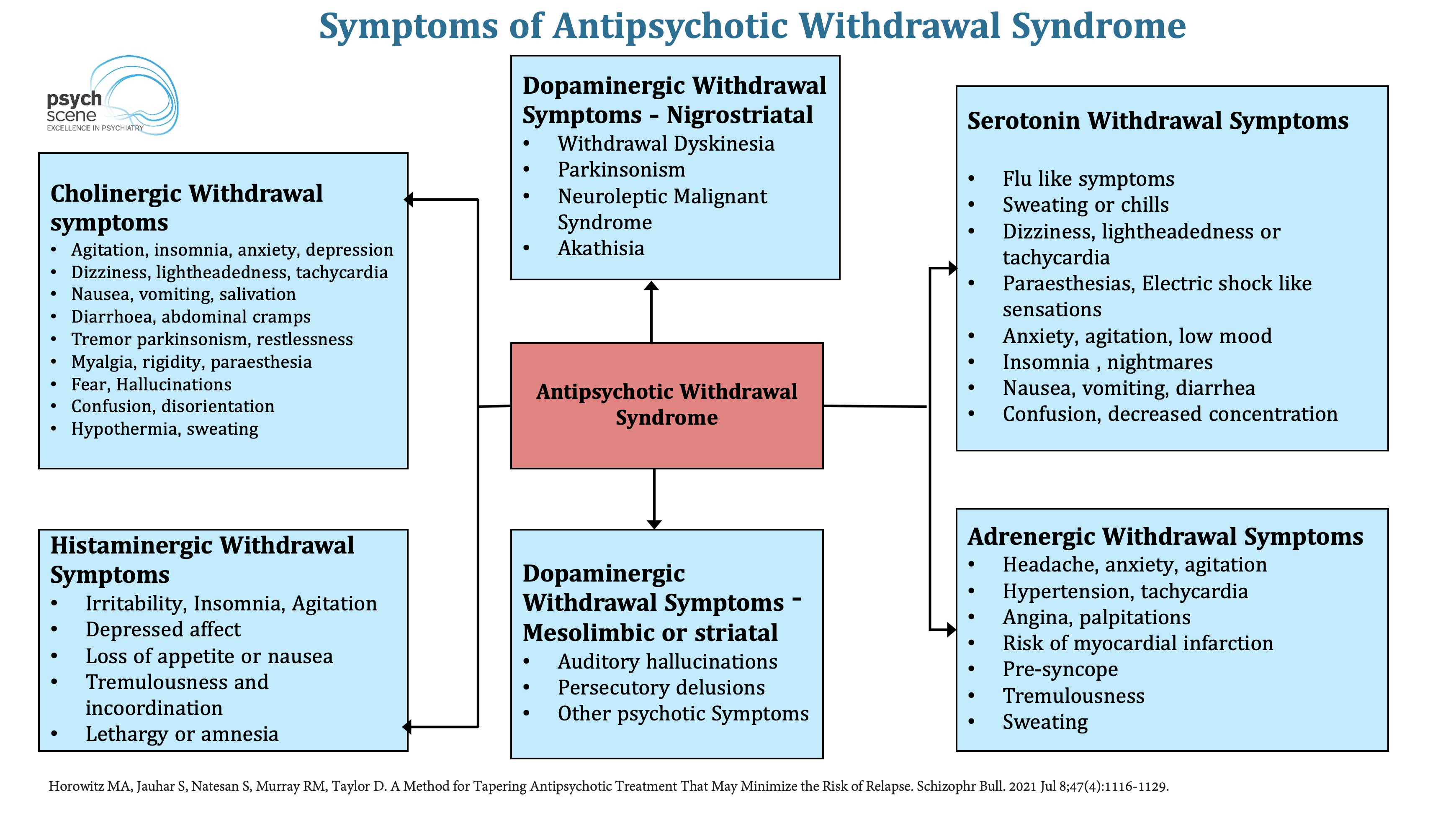 Research shows that the longer the exposure to antipsychotics the higher the risk of developing withdrawal-associated psychosis on discontinuation. [Robinson et al 1999]; [Tiihonen et al 2018]

Tiihonen et al showed that the risk of relapse doubles after 1–2 years, triples after 2–5 years and increases 7 times after 8 years of antipsychotic exposure. This correlation may not be causal as patients with more severe illnesses are likely to be on antipsychotics for longer periods. [Tiihonen et al 2018]

One study reported that 48% of relapses occur in the first 12 months after antipsychotic discontinuation (40% in the first 6 months), with only 2% per year after this period. [Viguera et al., 1997]

There is evidence of people with no previous history of psychosis who can develop psychotic symptoms after abrupt cessation of dopamine antagonists in a non-psychiatric setting (e.g reserpine, metoclopramide, domperidone). 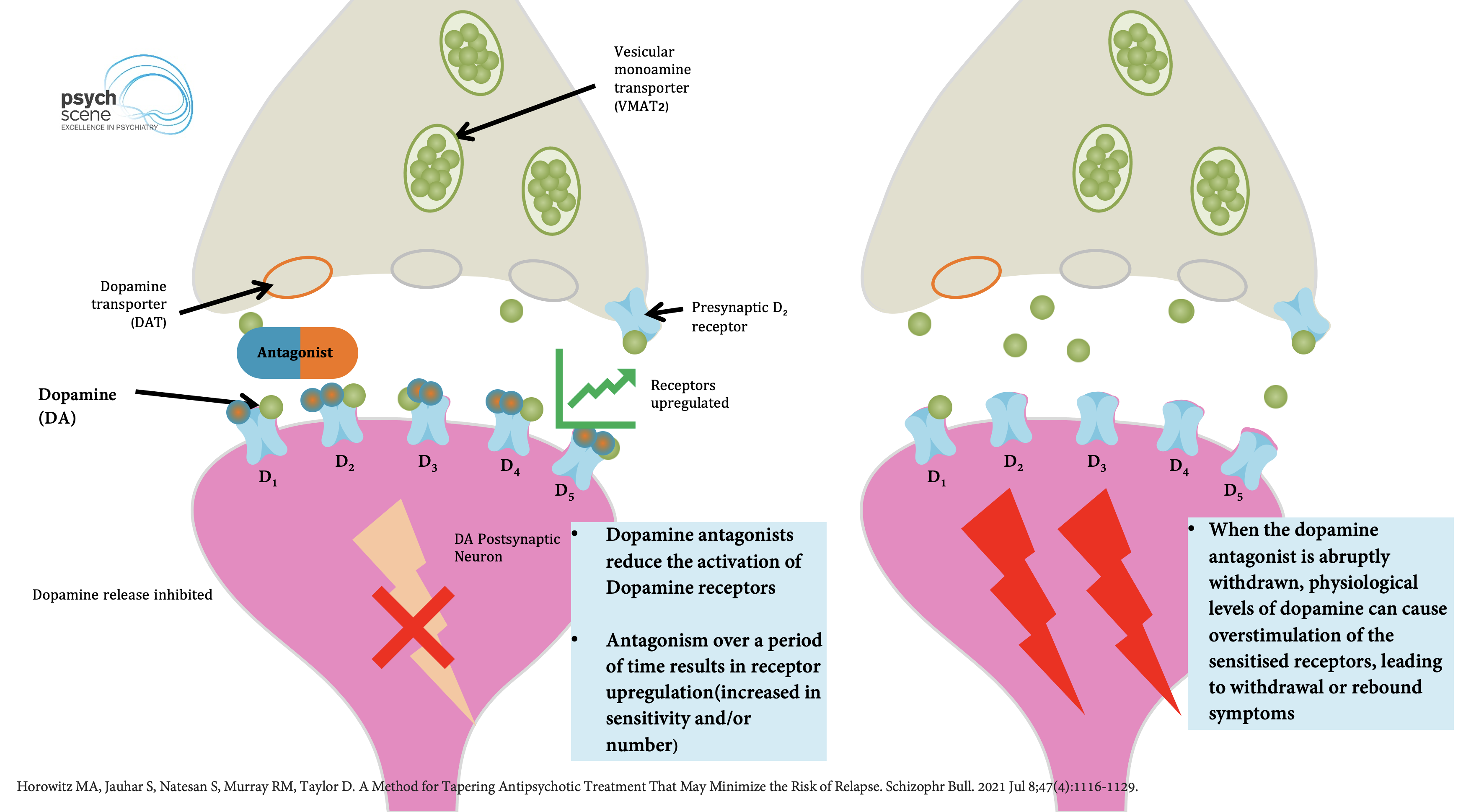 During the phase of post antipsychotic cessation, relapses occur due to a rebound effect which is a combination of neuroadaptations that take months and years to resolve combined with an increased vulnerability to life events and other stressors.

To mitigate the symptoms of antipsychotic withdrawal, the dose is gradually reduced or tapered to the minimum effective dose.

Gradual tapering involves a slow tapering in dose to allow drug-induced neuroadaptations to return to baseline.

However, given it can take 2–5 years for 60-90% of symptoms associated with TD to resolve, it has also been suggested that tapering periods also need to be as prolonged. [Horowitz et al. 2021]

Furthermore, the relationship between the dose of antipsychotic and its effect at the receptor may also be informative for creating a tapering schedule.

When using haloperidol as an example: 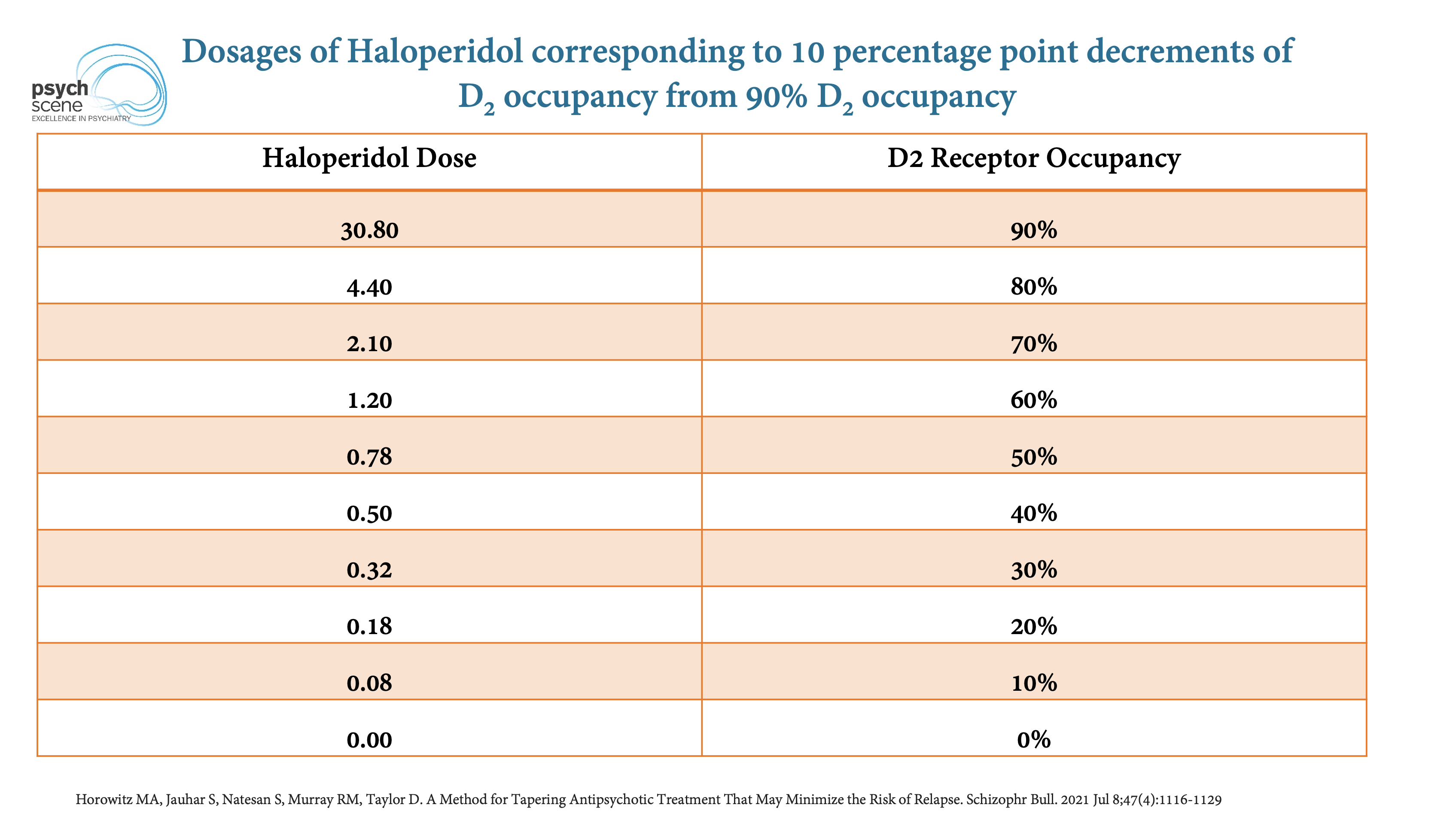 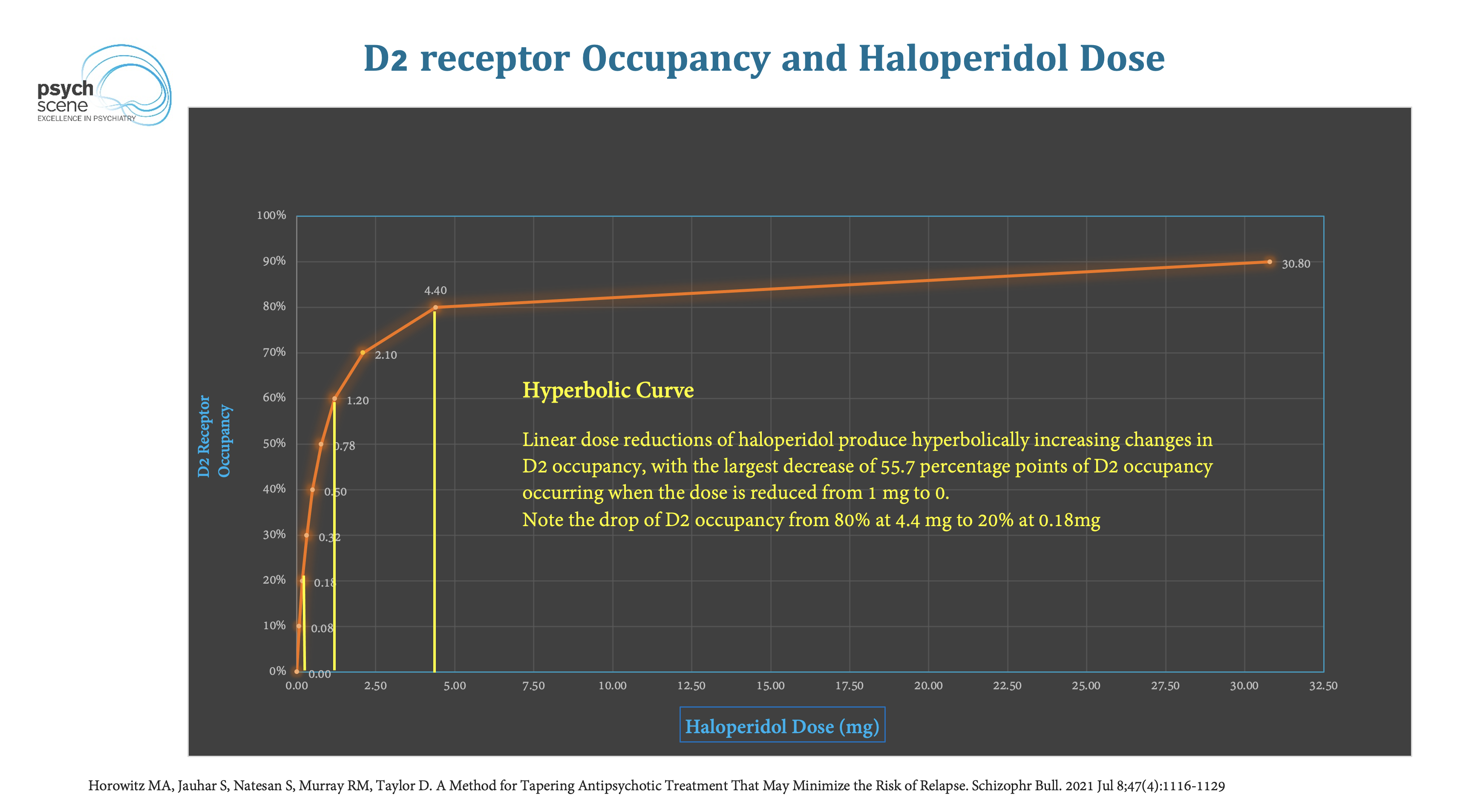 Here, it can be seen that a linear dose reduction schedule produces an increasingly more significant reduction in percentage points of D2 dopamine antagonism, i.e., there is a greater risk of dopaminergic rebound. It is also worth noting that the smallest tablet is 0.5 mg for haloperidol, and the step down from half of this tablet (0.25 mg) to 0 mg will produce a perilously considerable 25.5% point reduction.

To overcome this significant drop, liquid formulations and tapering strips have recently been developed to provide small tablet formulations and intermediate doses between commonly prescribed dosages. [Groot and van Os 2020] 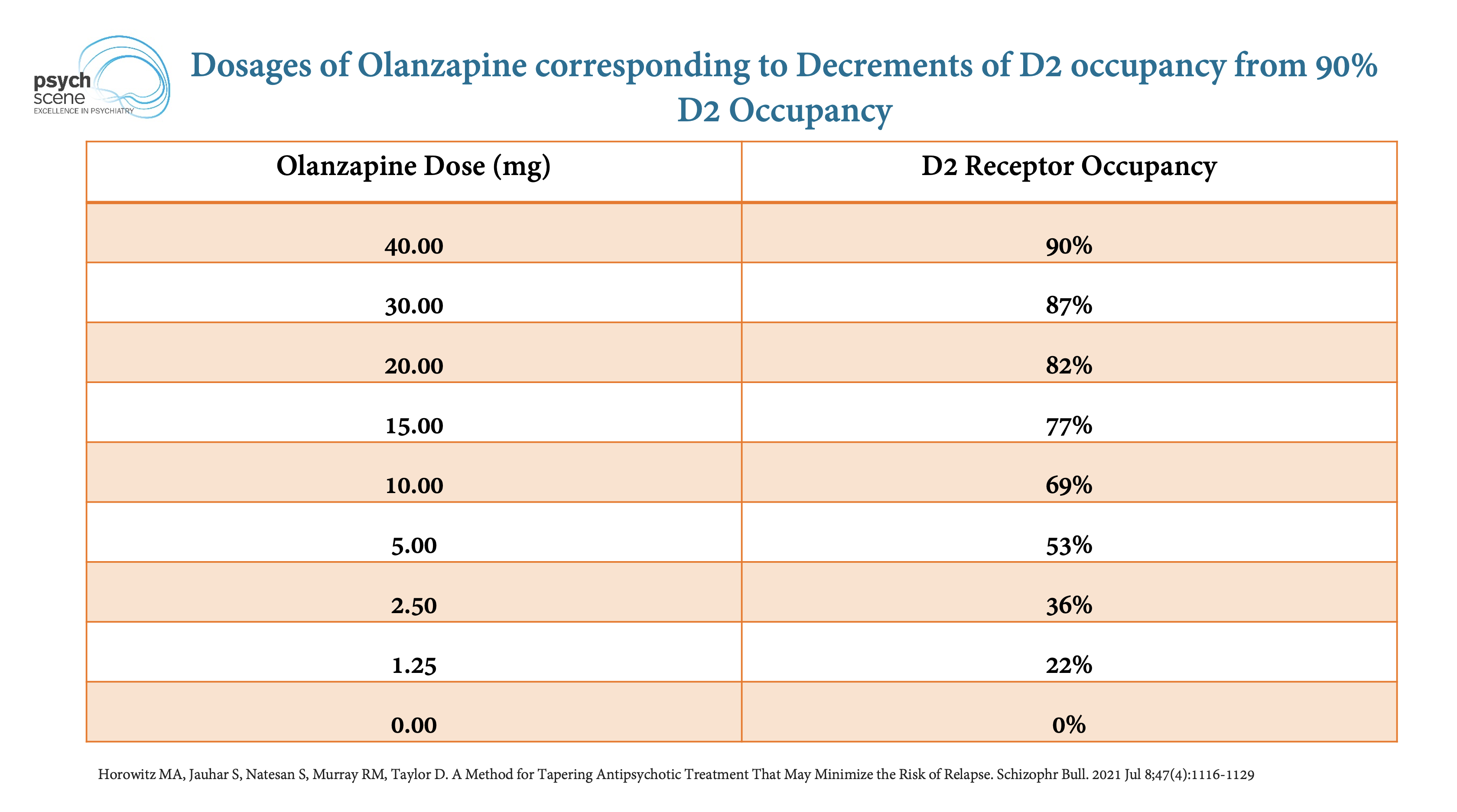 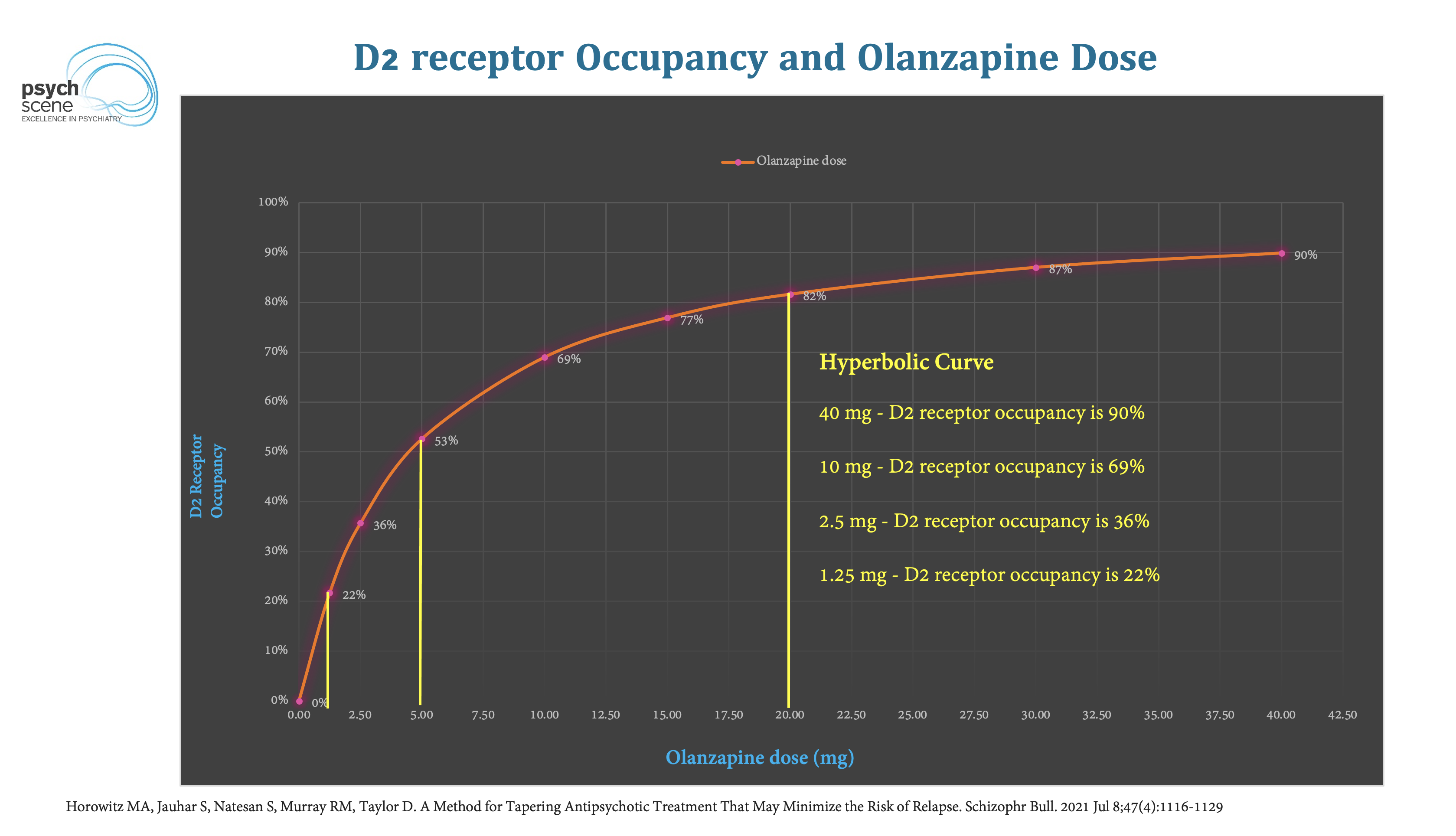 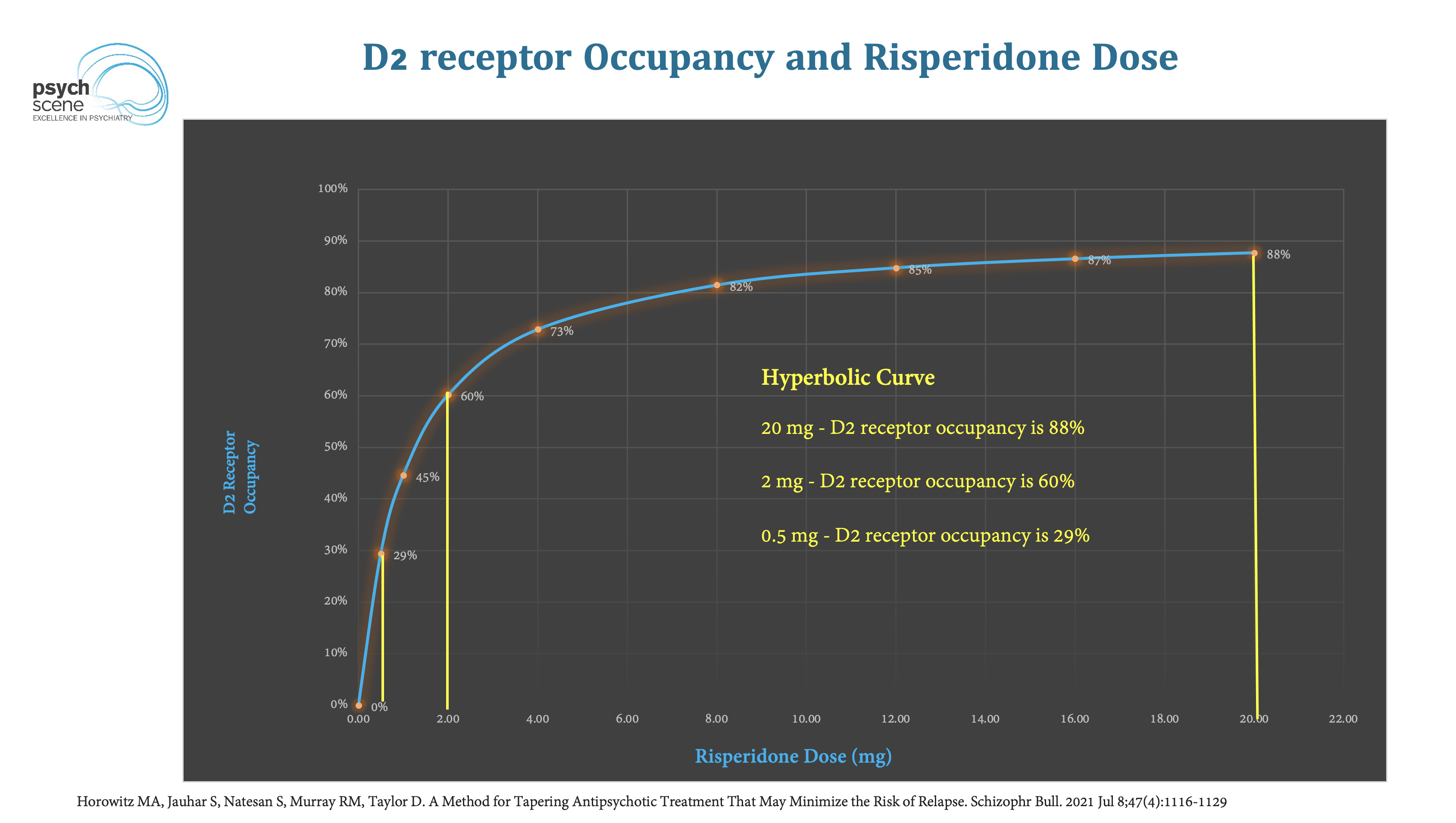 Horowitz et al. recently published a method for tapering antipsychotics to minimise the risk of relapse. It was suggested that this should be done gradually over months, even years, and should incorporate hyperbolic dose reductions where necessary to provide a more even reduction of D2 blockade. [Horowitz et al. 2021]

Overall, intervals of 3-6 months are suggested with the aim of reducing by ¼ or ½ of the most recent dose, which should be equal to a reduction of 5 or 10 percentage points of D2 occupancy. The following table provides a pharmacologically informed tapering regimen over 10 steps for 6 antipsychotics, with the starting dose representing the lowest recommended dose for multiple episodes of psychosis: 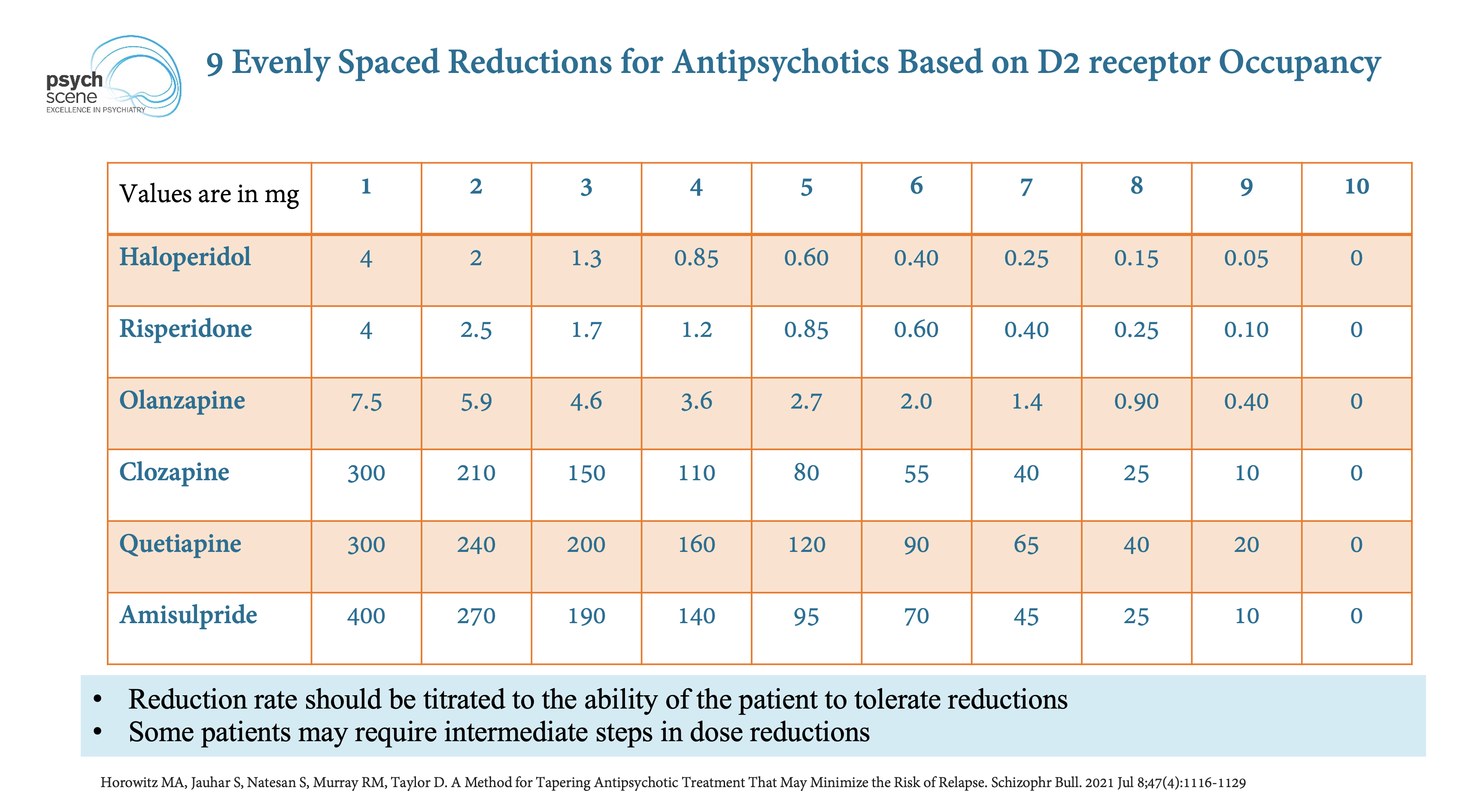 Finally, as there are likely to be several demographic and clinical variables that affect this tapering process, it is suggested that the process is personalised by observing the patients response to tapering. However, given any dose reduction is likely to have side effects, these should resolve over time as the underlying neuroadaptations slowly resolve back to baseline. [Gupta et al. 2018]

According to Horowitz et al.:

Many patients may tolerate dose reductions of 25%–50% of the most recent dose (corresponding approximately to 5–10 percentage point decrements of D2 occupancy) every 3–6 months. Smaller reductions (such as 10% of the most recent dose) made every month may be more tolerable in the aim of producing more “evenly spread” perturbation to the equilibrium.

Due to their long half-life and therefore long duration in reaching steady-state levels, Depot medications provide a form of “in-built” tapering.

More caution may be required for drugs with short half-lives or ‘hit and run’ characteristics, like clozapine or quetiapine, which can lead to rebound psychosis following withdrawal. It may be necessary to reduce doses by 2.5–5 percentage points of D2 (or cholinergic or histaminergic) occupancy every 6–12 weeks, depending on individual responses. 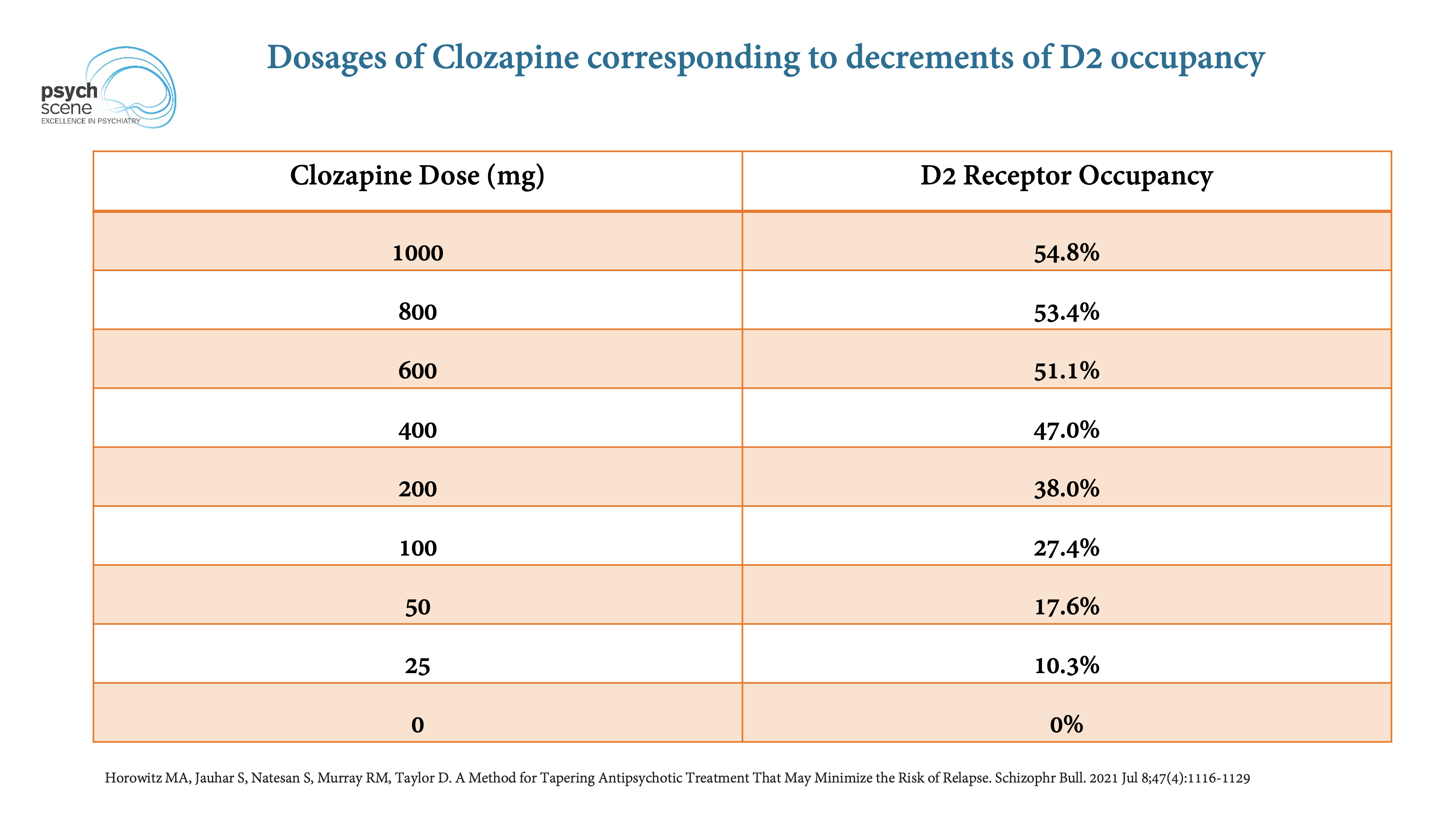 Recent evidence shows that drugs like aripiprazole that are partial agonists at the D2 receptor are less likely to induce dopaminergic hypersensitivity and thus less likely to lead to a relapse post discontinuation.

The risk of relapse after discontinuation of antipsychotic therapy may be reduced by gradual dose tapering over a prolonged period.

The tapering process should be in linear increments, to begin with, but then in a hyperbolic manner to evenly reduce D2 receptor blockade; this process should allow sufficient time for the underlying neuroadaptations to resolve.

Antipsychotic treatment in the maintenance phase of schizophrenia: An updated systematic review of the guidelines and algorithms

Shimomura Y et al., Antipsychotic treatment in the maintenance phase of schizophrenia: an updated systematic review of the guidelines and algorithms. Schizophr Res. 2020;215(1):8–16.

Recovery in remitted first-episode psychosis at 7 years of follow-up of an early dose reduction/discontinuation or maintenance treatment strategy: long-term follow-up of a 2-year randomized clinical trial

Loss of striatal cholinergic neurons as a basis for tardive and L-dopa-induced dyskinesias, neuroleptic-induced supersensitivity psychosis and refractory schizophrenia

Risk Factors for Psychotic Relapse After Dose Reduction or Discontinuation of Antipsychotics in Patients With Chronic Schizophrenia: A Systematic Review and Meta-analysis

Outcome of antidepressant drug discontinuation with taperingstrips after 1–5 years

Deprescribing antipsychotics: a guide for clinicians