Physical activity is recommended in clinical practice as a viable intervention for the treatment of subthreshold, mild, and moderate depression. Research shows that exercise has antidepressant qualities as well as also being a globally accessible, cost-effective, and low side-effect therapeutic strategy. [Schuch et al 2018]

EFFECTS OF EXERCISE ON RISK FACTORS FOR DEPRESSION

EFFICACY OF EXERCISE IN DEPRESSION

Although several studies have pointed to a protective role, the Cochrane Review in 2013 suggests exercise is no more effective than psychological or pharmacological therapies, which has resulted in a degree of confusion and controversy. [Cooney et al. 2013]

However, several questions have been raised about the validity of the Cochrane data. When scrutinising methodology and inclusion/exclusion criteria, it has been suggested that the strength and quality of the Cochrane review are flawed. [Ekkekakis 2014]

Although it is uncertain whether physical activity causally influences the risk for depression it has recently been shown that when including objectively assessed measures, physical activity had a protective and causal relationship with reducing the risk of depression. [Choi et al. 2019]

The question for future studies is whether interventions that increase physical activity can reduce the incidence of depression.

Low physical activity is associated with a greater risk of depression and some researchers also suggest that exercise can reduce the symptoms of depression although the exact mechanisms through which they produce this effect is unknown. [Kandola et al. 2019]

Some postulated mechanisms are as follows: 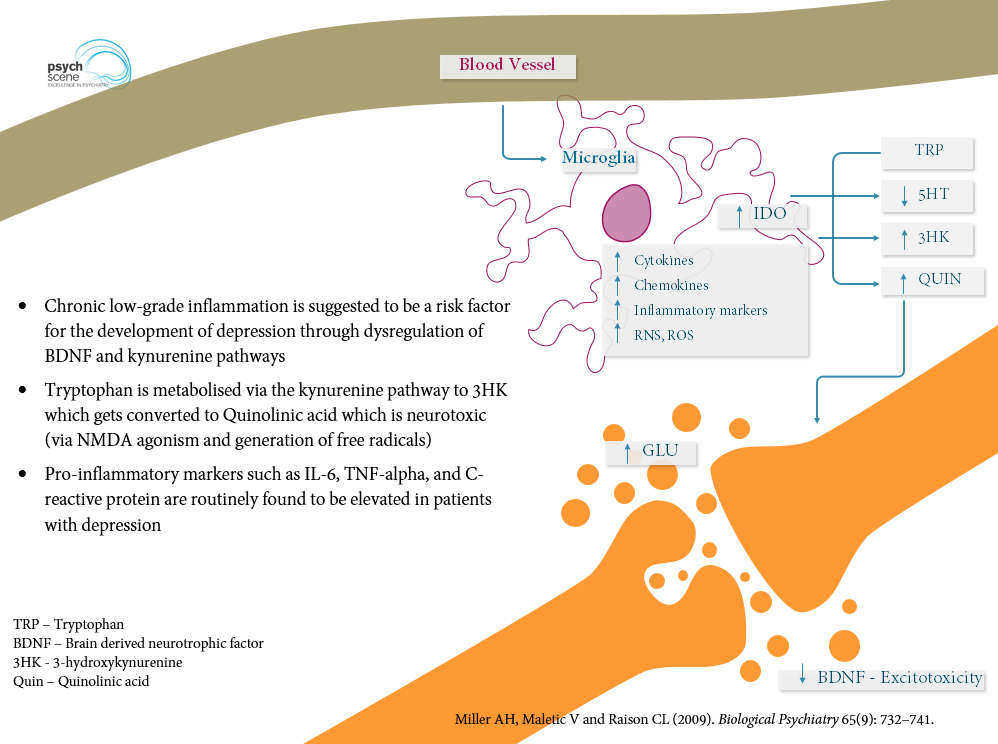 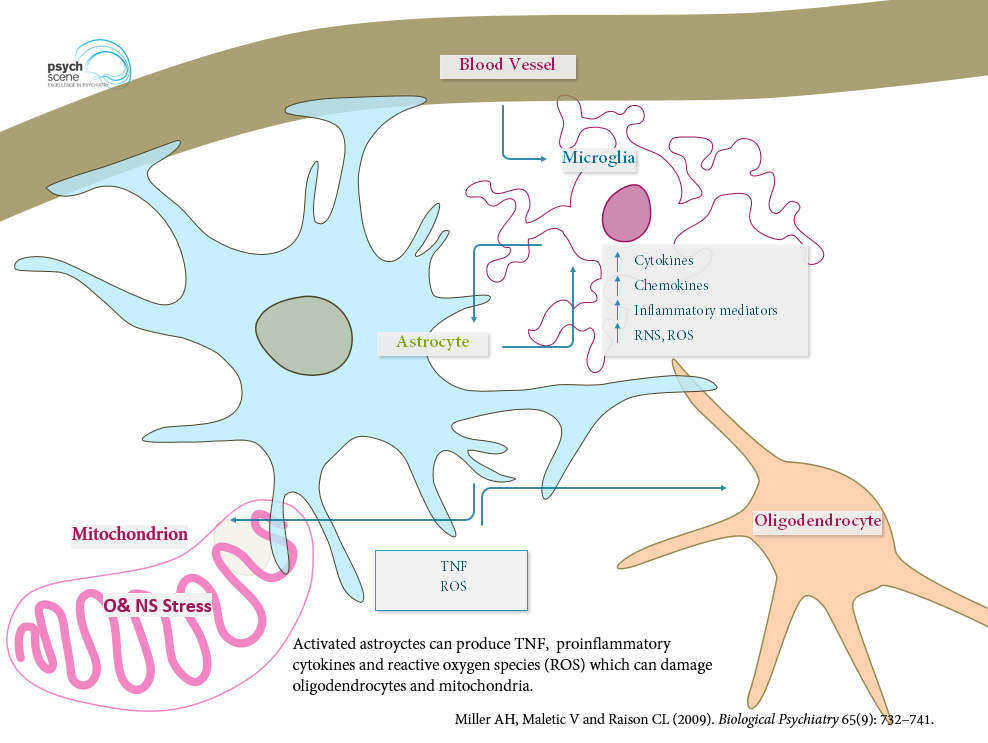 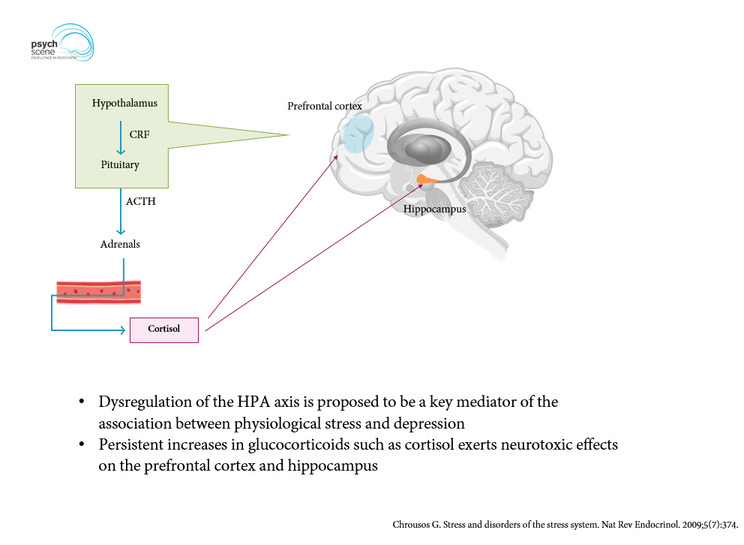 Psychosocial dysfunction in domains such as perception, identification, and interpretation of social cues is commonly observed in depressed patients.

HOW SHOULD PHYSICAL ACTIVITY BE PRESCRIBED?

Physical exercise is included as part of the guidelines in the management of depression.

Clinicians should incorporate the evaluation of physical activity in their clinical history. The Ask, Assess and Advise (3As) approach can be a simple yet effective strategy in prescribing physical activity. [Visit the Public Health Scotland Website for more details] 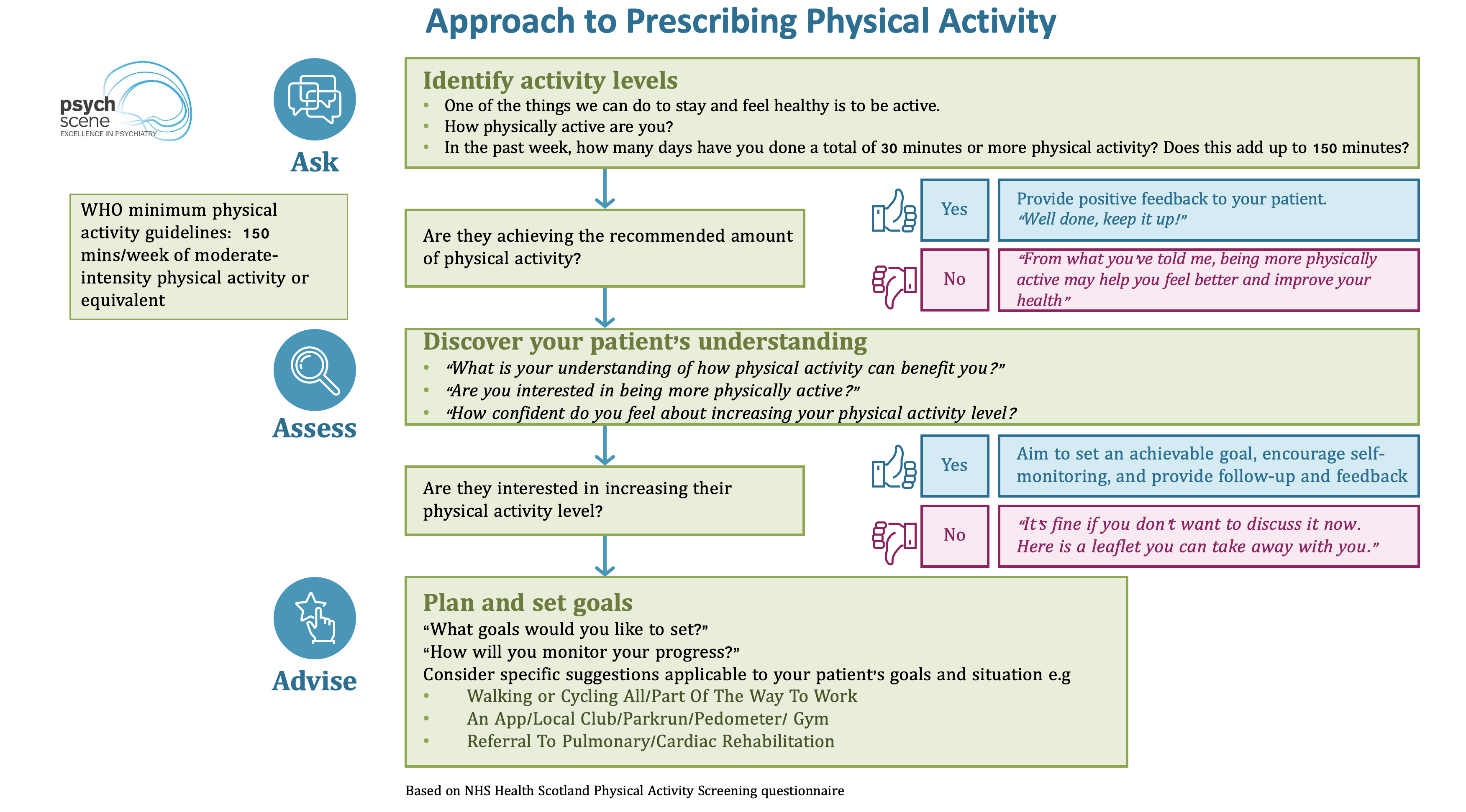 Evidence shows the following health benefits could be achieved from 10 minutes of brisk walking (at least 4.83 km/h) per day for 7 days: [Public Health England] 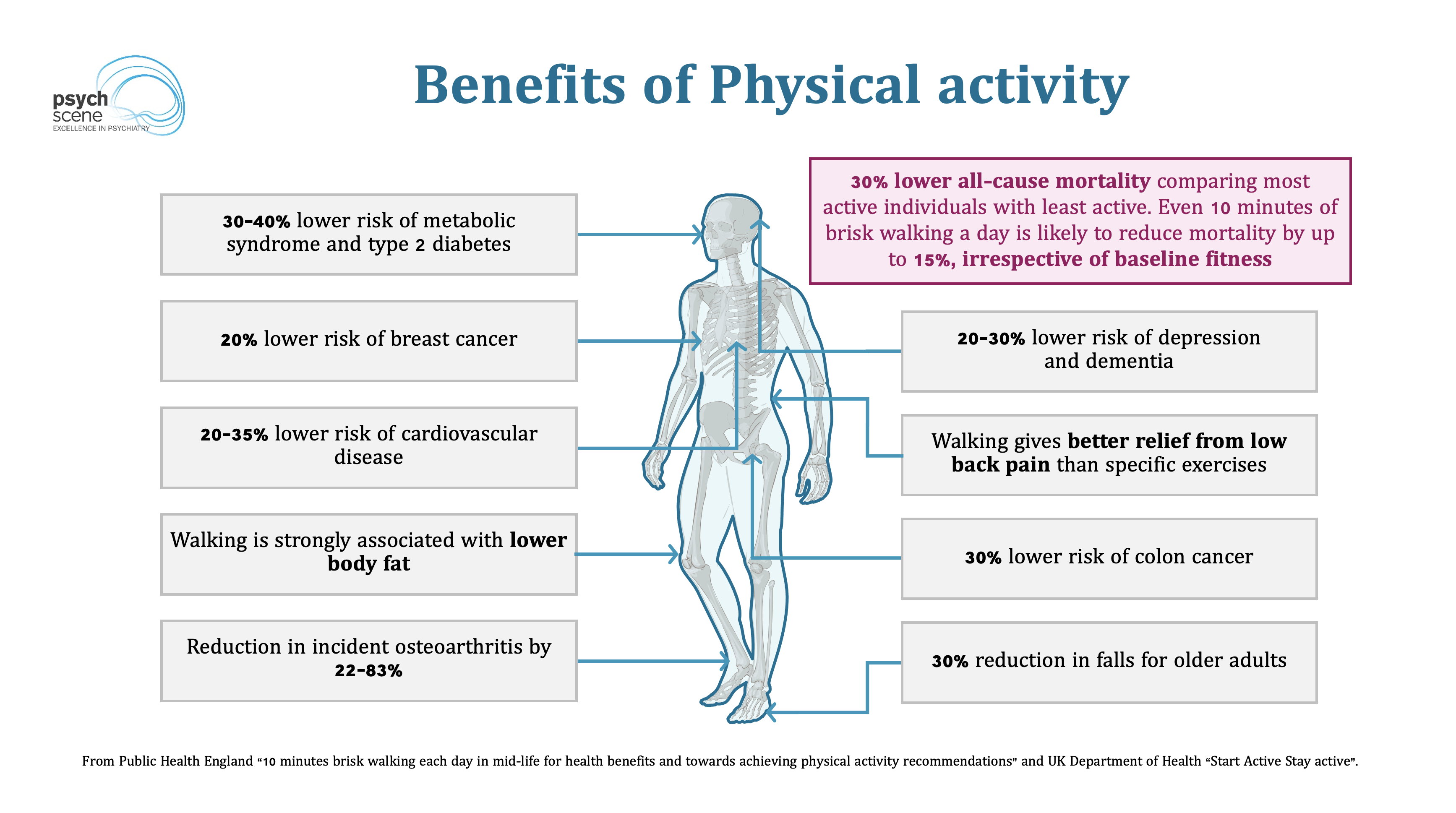 The diagram below shows the physical activity energy expenditure (PAEE) of common activities performed during leisure time and at work. 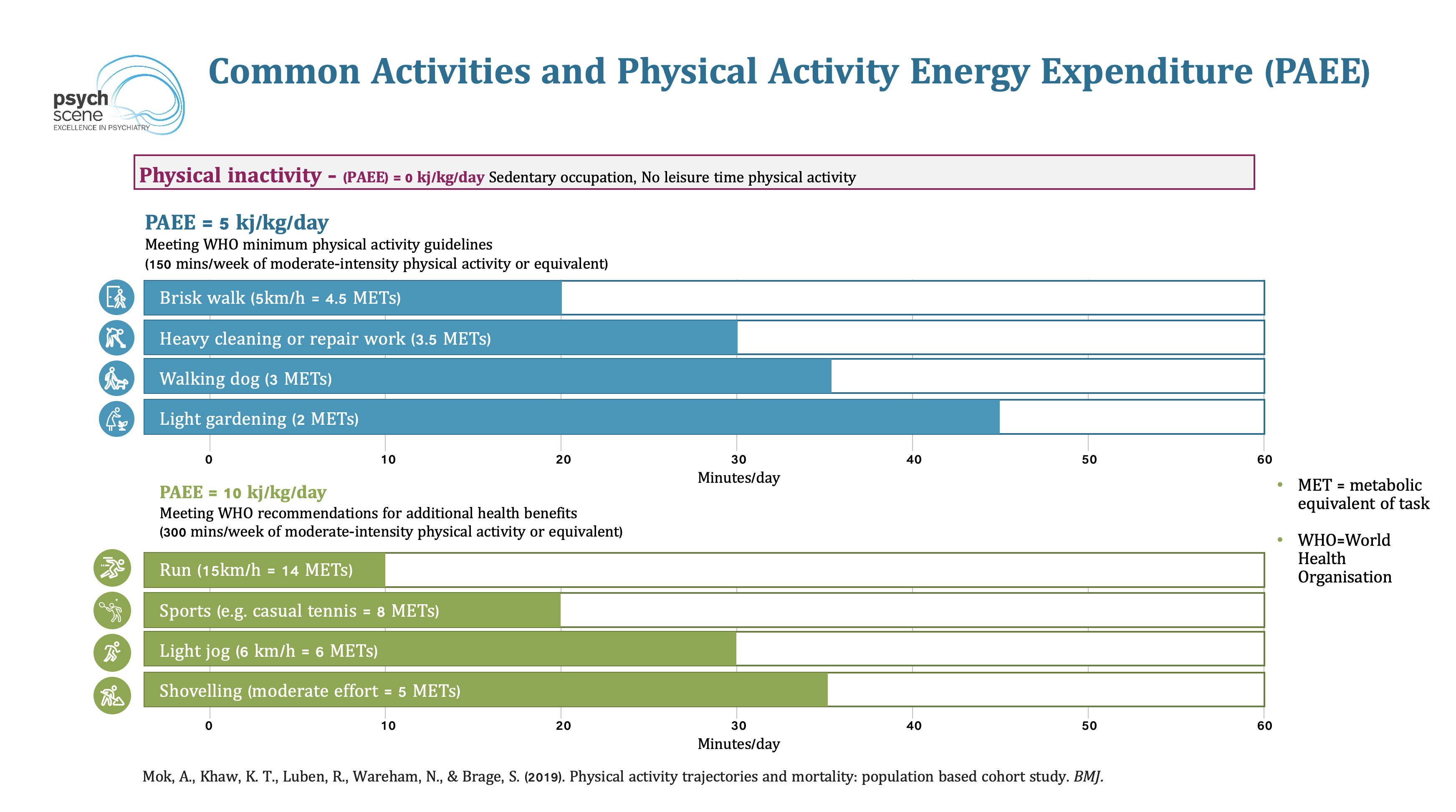 Increasing PAEE by 1 kJ/kg/day per year (equivalent to a trajectory of being inactive at baseline and then subsequently increasing physical activity to 5 and 10 kJ/kg/day), five and 10 years later, respectively—was associated with a 24% lower risk of all-cause mortality. [Mok et al., 2019]

This gain in longevity from increasing physical activity over time is in addition to the benefits already accrued from baseline physical activity, such as a 30% lower risk of mortality for a between-individual difference of 10 kJ/kg/day.

While exercise and physical activity is a useful strategy in the treatment of depression, the optimal exercise prescription (“dose” of exercise – intensity, frequency, session duration), and the response remains unknown.

Despite the lack of clear guidance at this point in time, clinicians should recommend physical activity to patients as part of a holistic treatment strategy in depression.

The association between diet quality, dietary patterns and depression in adults: a systematic review

How robust is the association between smoking and depression in adults?

Luger T et al., How robust is the association between smoking and depression in adults? A meta-analysis using linear mixed-effects models. Addict Behav. 2014;39:1418-1429.

Depression increases the risk of mortality in patients with heart failure: a meta-analysis.

Depression and risk of sudden cardiac death and arrhythmias

Comparative effectiveness of exercise and drug interventions on mortality outcomes

Acute exercise and hormones related to appetite regulation: a meta-analysis

Effects of aerobic, resistance, and combined exercise training on insulin resistance markers in overweight or obese children and adolescents

Exercise and sleep: a systematic review of previous meta-analyses.

Exercise for patients with major depression: a systematic review with meta-analysis and trial sequential analysis

Honey, I shrunk the pooled SMD! Guide to critical appraisal of systematic reviews and meta-analyses using the Cochrane review on exercise for depression as example

Joggin’ the noggin’: Towards a physiological understanding of exercise-induced cognitive benefits

Brown W et al., A Systematic Review of the Acute Effects of Exercise on Immune and Inflammatory Indices in Untrained Adults. Sports Med. 2015;1(1):35.

The Antioxidant Effect of Exercise: A Systematic Review and Meta-Analysis.

Stress and disorders of the stress system

The effects of acute physical exercise on memory, peripheral BDNF, and cortisol in young adults

An examination of potential mechanisms for exercise as a treatment for depression: a pilot study

Foley L et al., An examination of potential mechanisms for exercise as a treatment for depression: a pilot study. Mental Health and Physical Activity. 2008;1(2):69-73.

A review of the role of social cognition in major depressive disorder.

Social support and resilience to stress: from neurobiology to clinical practice.

Change in self-esteem, self-efficacy and the mood dimensions of depression as potential mediators of the physical activity and depression relationship:

White K et al., Change in self-esteem, self-efficacy and the mood dimensions of depression as potential mediators of the physical activity and depression relationship: Exploring the temporal relation of change. Mental Health and Physical Activity. 2009;2(1):44-52.