Amisulpride is a synthetic substituted benzamide compound that is approved in Europe and Australia for the treatment of psychosis and schizophrenia. Amisulpride (Solian) is available in 50 mg and 200 mg tablets and is used to treat positive and negative symptoms of acute and chronic schizophrenia in adults.

Furthermore, clinical trials have also shown that amisulpride has antidepressant properties in both schizophrenia [Kim et al. 2007] and mood disorders [Montgomery 2002] and that it improves cognition with notable effects on the domains of attention, executive function, and working memory. [Mortimer et al. 2007]

Amisulpride is a highly selective dopamine D2/D3 receptor antagonist that is described as having atypical properties even though it does not block serotonin receptors. [Rein et al 1997]

Its characterisation as atypical comes from its selective affinity for receptors in limbic structures but not in the striatum, which means a low extrapyramidal symptom burden exists. [Perrault et al 1997]

A prospective study, of a cohort of first-episode, antipsychotic-naïve schizophrenia patients, were examined before and after 6 weeks of treatment with amisulpride (selective dopamine D2/3  receptor antagonist).

Read more on the role of D3 receptors in negative symptoms. 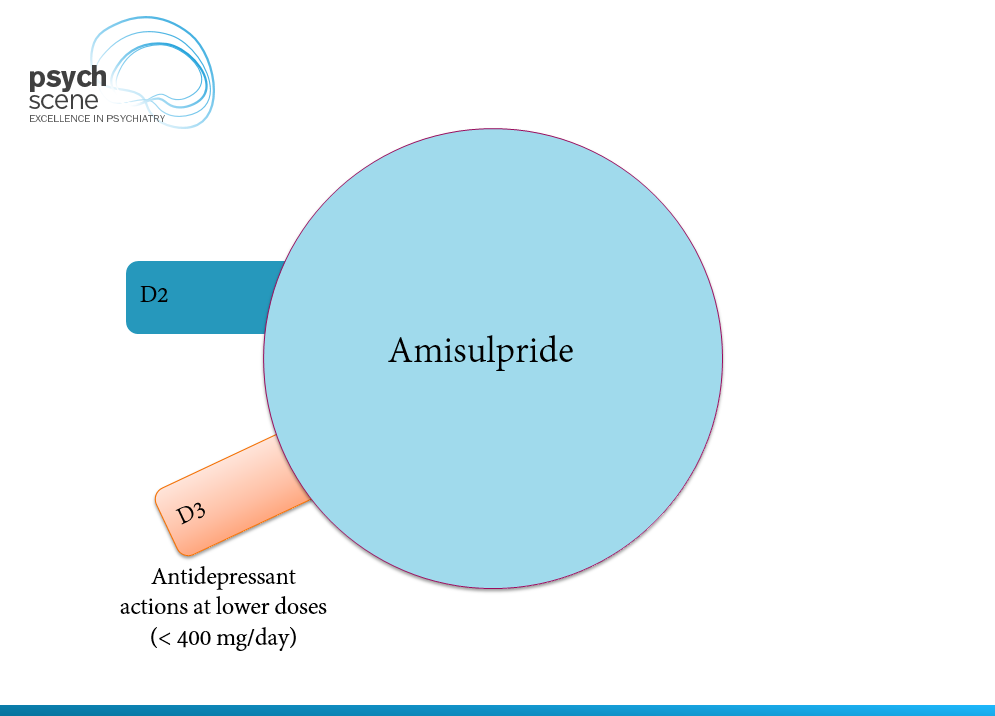 At higher doses, amisulpride blocks postsynaptic dopamine D2 and D3 receptors in the limbic region and prefrontal regions, which is responsible for its antipsychotic effects. [Scatton et al 1997] 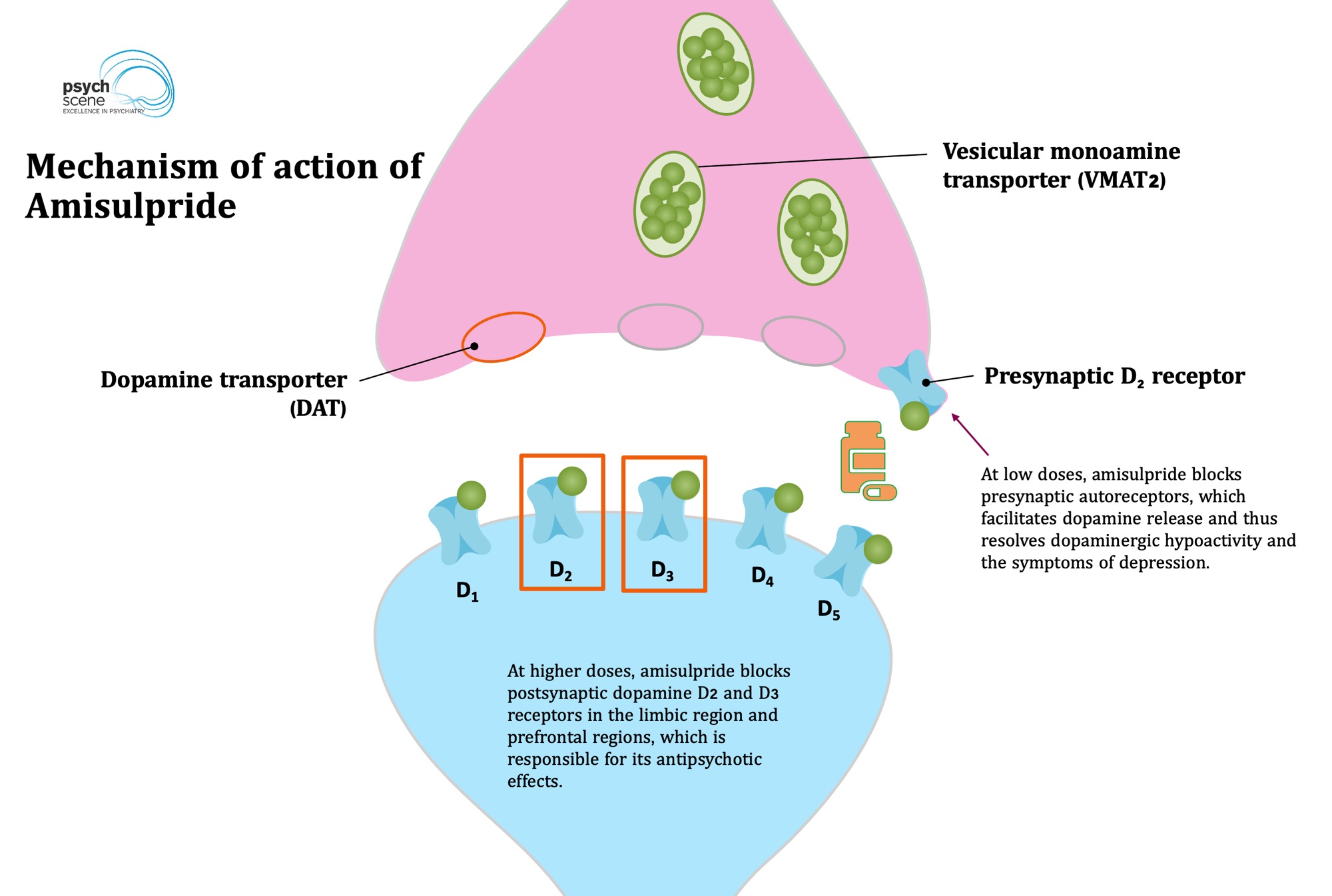 Oral amisulpride is rapidly absorbed, has a bioavailability of approximately 50%, and reaches a maximum serum concentration of 42-56 µg/L within 1-4 hours. Steady-state concentrations are generally reached after 3 days. Amisulpride has an elimination half-life of 12 hours and is excreted mainly via the kidneys with a renal clearance of 17-20 L/h. [Sparshatt et al 2009] 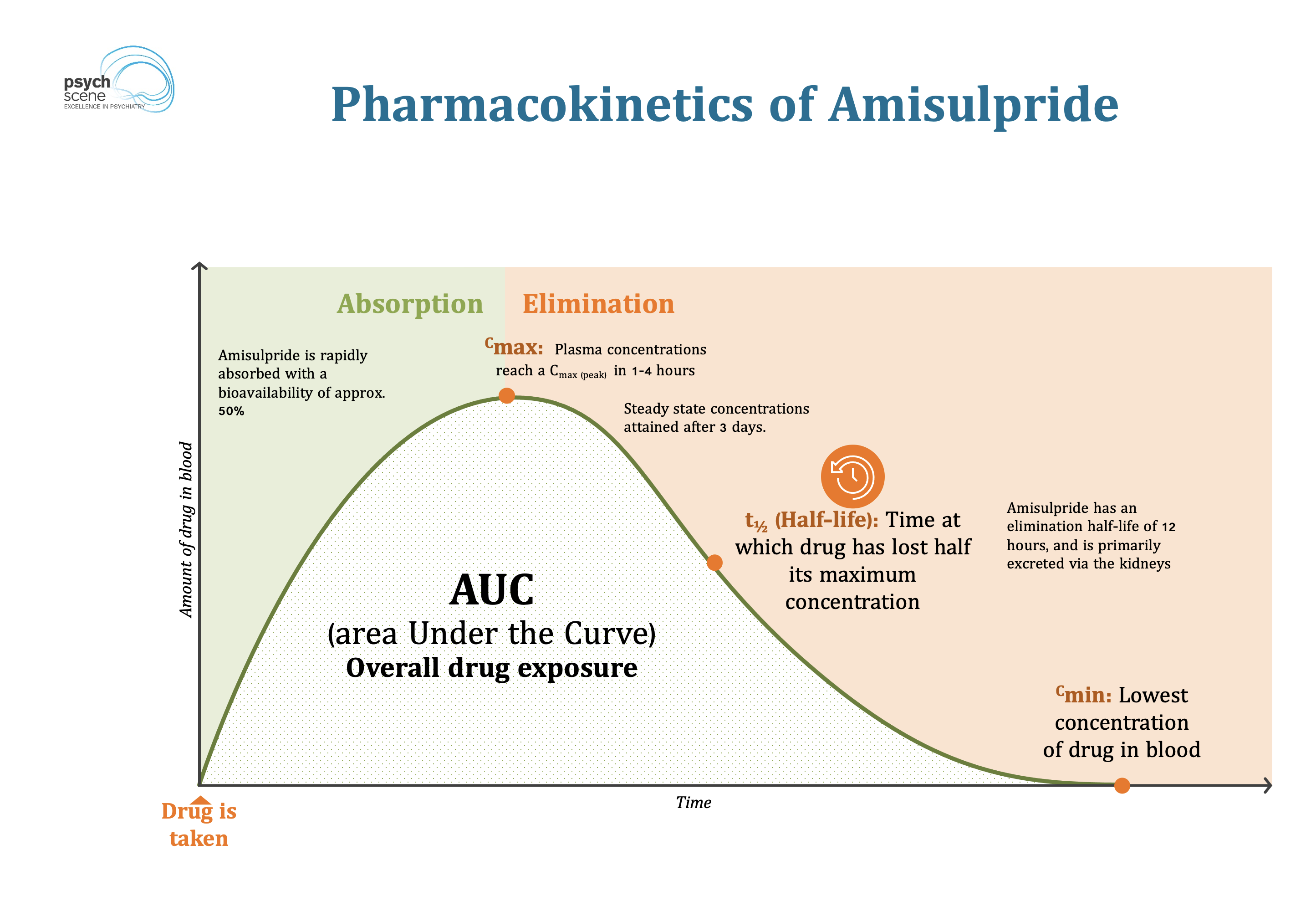 Amisulpride has two inactive and zero active metabolites; it is weakly metabolised by the cytochrome P450 isoenzyme system thus avoiding clinically relevant metabolic interactions. [Spina and de Lean 2007] Furthermore, amisulpride is not an inhibitor of any of these CYP450 enzymes. [Gillet et al 2000]

Amisulpride has a very favourable safety profile compared to other atypical antipsychotics with a very low incidence of cardiac, CNS, or gastrointestinal side effects reported. [Coulouvrat and Dondey-Nouvel 1999]

However, it is associated with an elevation in serum prolactin levels, which is due to its potent D2 antagonist properties.

Increase in plasma prolactin levels was associated with D2 receptor antagonism and found to be markedly greater with amisulpride than with other atypical agents (risperidone, olanzapine, and quetiapine) in a 2-week study in patients with schizophrenia. [Fric M et al., 2003]

Hyperprolactinaemia has been reported in patients receiving amisulpride dosage of as low as 50 mg/day as an augmentation to antidepressant therapy. [Raj and Sidhu., 2008]

Furthermore, it has been reported that amisulpride has a dose-dependent effect on the QTc interval with overdoses associated with QT prolongation and Torsades de Pointes. [Isbister et al. 2010]

Ethnic differences are anticipated; however, age and gender have no significant influence on its cardiotoxicity in cases of overdose.

Amisulpride (100-400 mg/day) has been proposed as an option for the management of clozapine-induced sialorrhea (hypersalivation).

Finally, amisulpride injection (5 mg/2 mL) was recently approved as a post-operative antiemetic for the rescue treatment of postoperative nausea and vomiting (PONV) in patients who have failed the current standard of care for nausea after a surgical procedure. [BARHEMSYS, prescribing information]

Amisulpride is a safe and effective antipsychotic therapy for the treatment of positive and negative symptoms in schizophrenia.

Amisulpride has a unique dose-dependent receptor pharmacology as shown by its efficacy at low doses to treat depressive symptoms and (potentially) negative symptoms in schizophrenia and positive symptoms at higher doses.

Amisulpride versus risperidone in the treatment of depression in patients with schizophrenia: a randomized, open-label, controlled trial

Montgomery S. Dopaminergic deficit and the role of amisulpride in the treatment of mood disorders. Int Clin Psychopharmacol. 2002;17: S9-15.

Treatment with amisulpride and olanzapine improve neuropsychological function in schizophrenia

Amisulpride is a potent 5-HT 7 antagonist: relevance for antidepressant actions in vivo.

Safety of amisulpride (Solian): a review of 11 clinical studies

Prolactin levels and symptoms of hyperprolactinaemia in patients treated with amisulpride, risperidone, olanzapine and quetiapine.

Antipsychotic drugs for patients with schizophrenia and predominant or prominent negative symptoms: a systematic review and meta-analysis.