Alcohol Use Disorder – Evidence Based Recommendations for Diagnosis and Pharmacotherapy

Alcohol use remains one of the top 10 global risk factors for illness and disease. It affects males more than females and is responsible for around 5.9% of deaths worldwide (7.6% of men, 4.0% of women). Other health conditions associated with alcohol-related deaths include cardiovascular disease and diabetes (33.4%), injuries (17.1%), gastrointestinal illnesses (16.2%) and cancers (12.5%). [Rehm and Imtiaz 2016], [WHO 2018]

Alcohol use disorder is the most common cause of death in men under 50, with heavy drinking and alcohol dependence causing the most significant burdens of harm. [Nutt, 2019]

In 2018, Kranzler and Soyka did a multi-year literature search to determine which pharmacological therapies were most used and which were most effective at treating alcohol use disorder. Meta-analyses were prioritised, and randomised controlled trials (RCTs) were selected where data on medication effects were poor or absent. A total of 81 relevant articles were reviewed. This article summarises the evidence along with current recommendations on pharmacotherapy in AUD. [Kranzler and Soyka, 2018]

We have previously covered the neurobiology of AUD.

DEFINITION OF ALCOHOL USE DISORDER

The DSM-5 defines Alcohol Use Disorder (AUD) as a problematic pattern of substance use, leading to clinically significant impairment or distress, with two or more of the following presenting in the same 12-month period:

Binge drinking is defined as the consumption of >5 standard drinks on the same occasion for males and >4 for women. 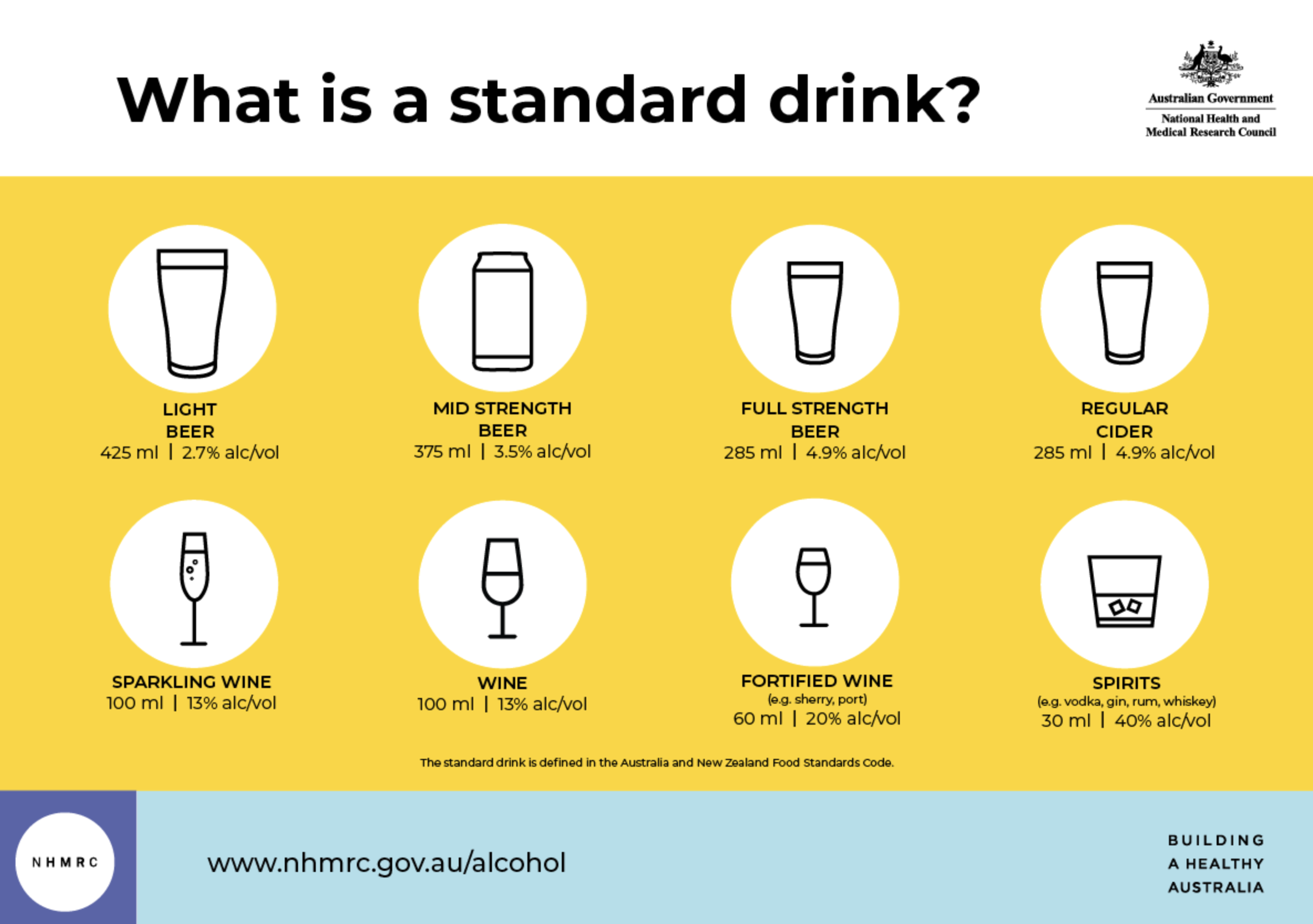 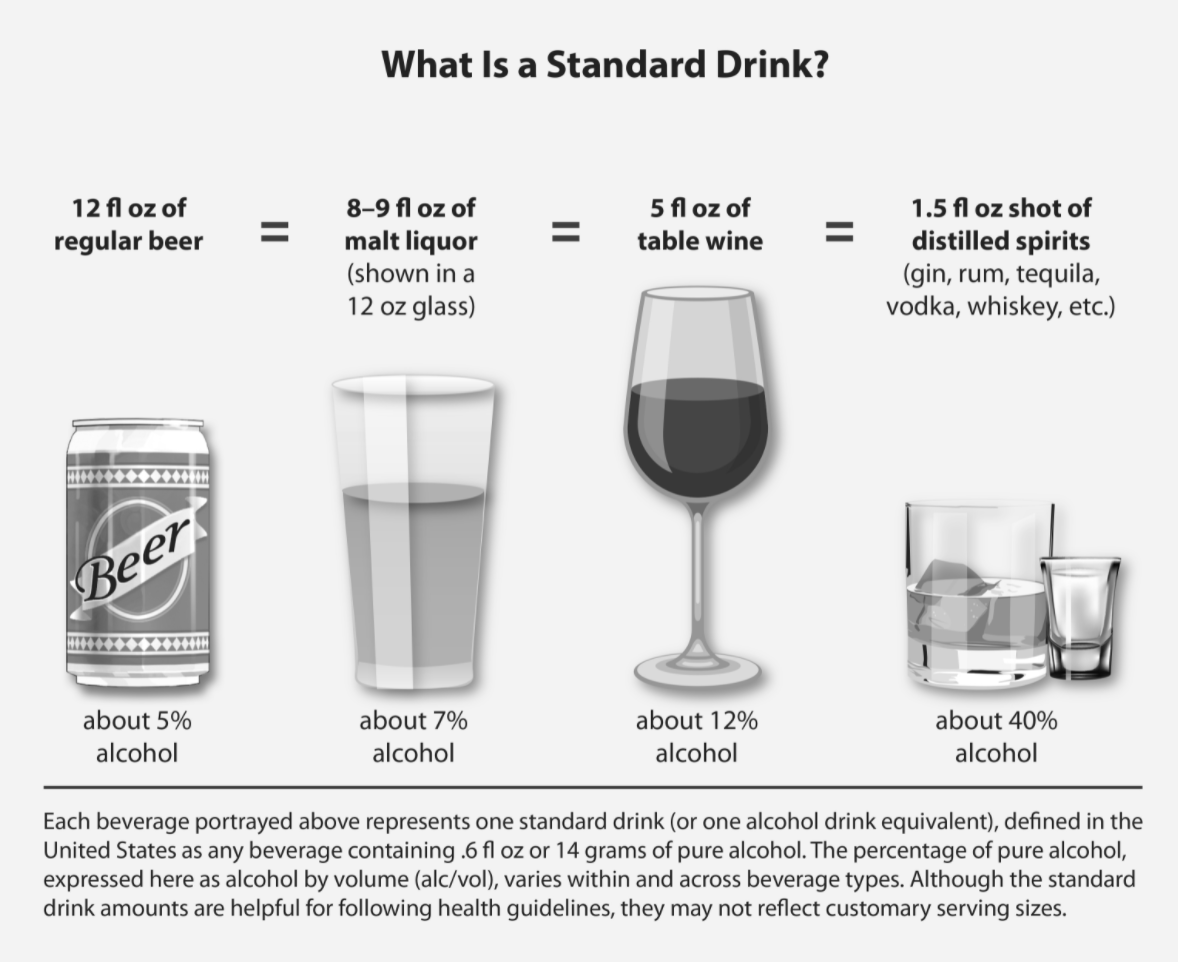 Heavy alcohol use is defined as binge drinking on 5 or more days in the last month. [American Psychiatric Association 2013]

CHANGES TO THE DSM-5 CRITERIA

Assessment and diagnosis rates for alcohol use disorder have improved because of these changes, but treatment uptake remains inconsistent:

Although routine screening for heavy alcohol use can identify patients with alcohol use disorder (AUD) and has been recommended, only 1 in 6 US adults report ever having been asked by a health professional about their drinking behaviour.

Patients with AUD most commonly receive counseling. Medications are prescribed to less than 9% of patients who are likely to benefit from them, given evidence that they exert clinically meaningful effects and their inclusion in clinical practice guidelines as first-line treatments for moderate to severe AUD. [Kranzler and Soyka, 2018]

ETIOPATHOGENESIS OF ALCOHOL USE DISORDER 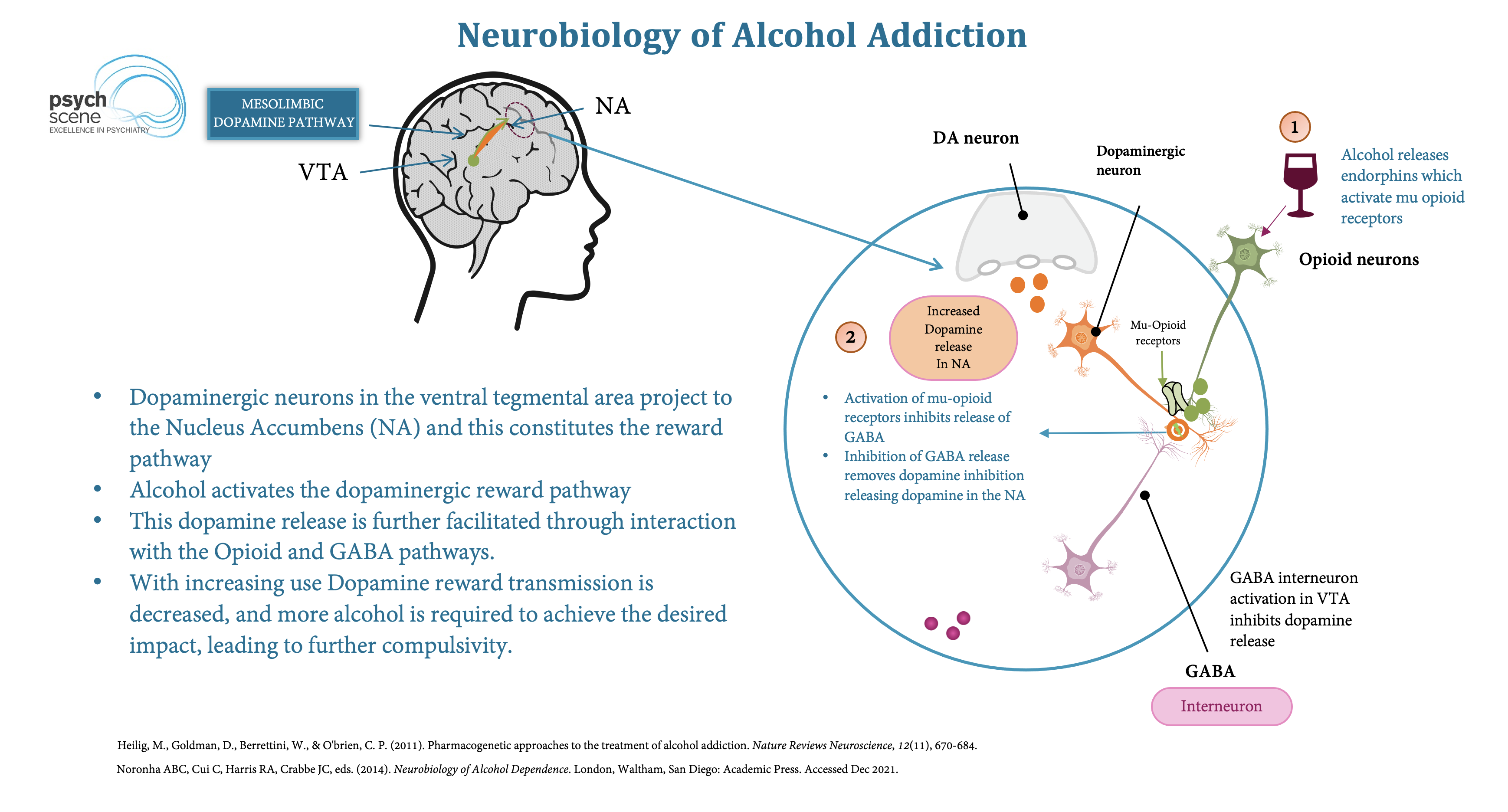 To improve diagnosis rates, clinicians should routinely screen all adults over 18 for alcohol use, even if clinical or demographic risk factors are not present.

The three screening tools currently recommended for heavy alcohol use by the U.S. Preventative Services Taskforce include: [Moyer 2013]

Sensitivity and specificity were similar across all three (70-87% and 61-94% respectively) [Moyer 2013], demonstrating confidence in their clinical application.

Patients who screen positive for heavy alcohol use should be further assessed for AUD, and the severity of symptoms should then determine the most appropriate treatment approach. [Moyer 2013]

In patients experiencing alcohol withdrawal, clinicians should assess the severity and history of symptoms.

The CIWA-Ar can be used to measure its severity as treatment options differ based on severity. Download the CIWA-Ar.

The recent APA practice guideline for pharmacotherapy in alcohol use disorder is limited to moderate to severe populations. [Reus et al., 2018]

More studies are needed on the application of pharmacotherapy for mild AUD to help close this gap.

PHARMACOLOGICAL TREATMENTS FOR ALCOHOL USE DISORDER

It is estimated that only 8-9% of people who require treatment receive specialist help despite the considerable health and economic costs of AUD. [Kranzler and Soyka, 2018]

Abstinence rates were higher in the combination group (53.7%), with a median average of 98 days between relapses. Those in the naltrexone only, sertraline only and placebo groups showed similar respective rates of 21.3% and 26 days; 27.5% and 23 days; 23.1% and 26 days, indicating the possible benefits of combining medications to treat concurrent AUD and psychiatric disorders. [Pettinati et al., 2010]

In one of the most extensive alcohol pharmacotherapy trials to date, the COMBINE study, alcohol-related problems directly correlated with participants binge-drinking days and when binges reduced, so did many of the corresponding social complications. [Anton et al., 2006]

The study showed that while abstinence was linked to better health and social outcomes, individuals were more likely to benefit from treatments if clinicians took a ‘harm-reduction’ approach instead of forced abstinence.[Anton et al., 2006] 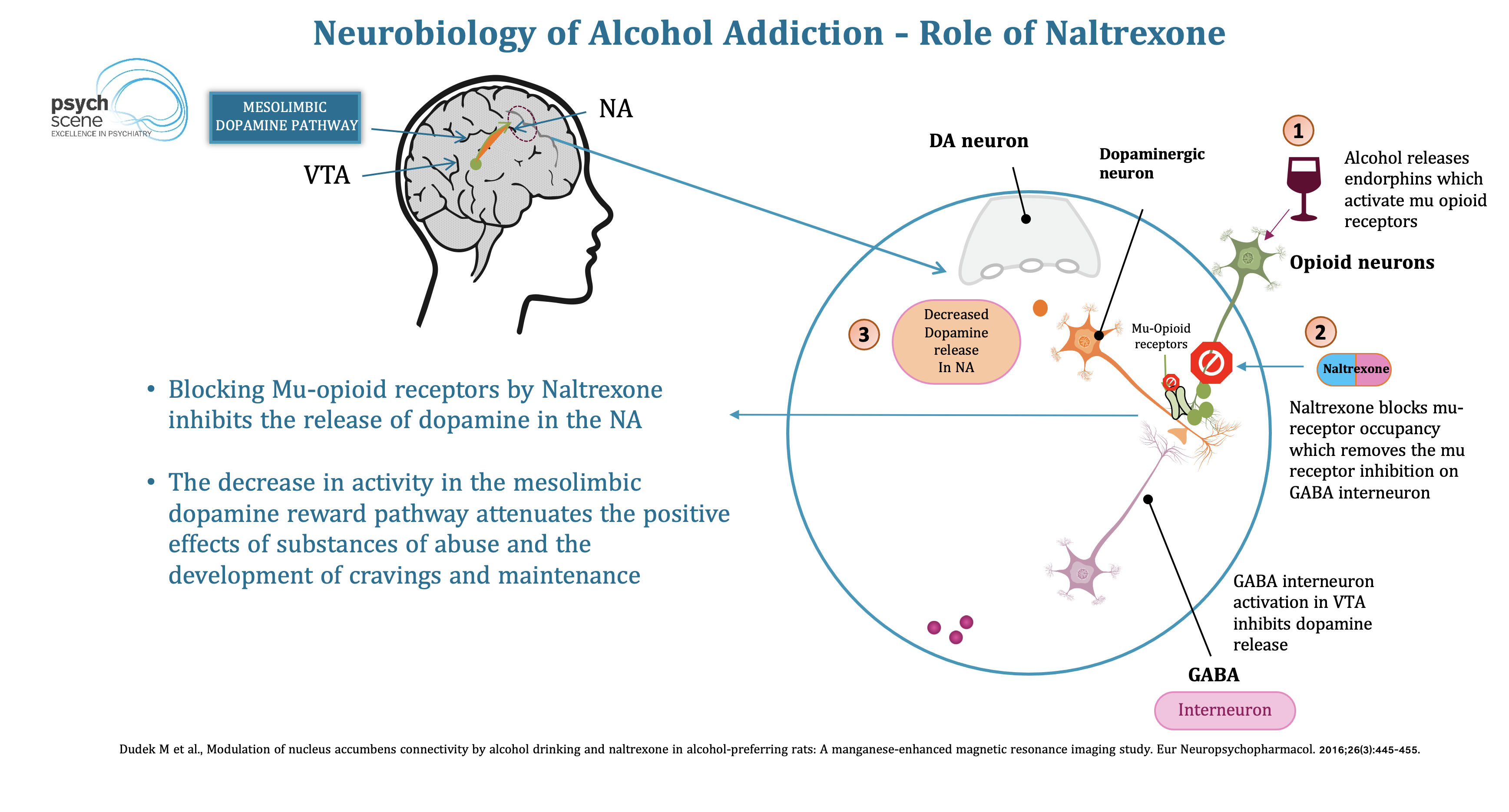 Meta-analysis data from 13 RCTs (N=1492) indicated that baclofen was effective in:

In general, except for acamprosate and naltrexone, the number of RCTs testing the efficacy of AUD treatments is imperfect. For example, they have not tested optimal treatment duration, stepped approaches, or combination therapy for poor or non-responders. Methodologies also differ between studies, making accurate comparisons and clinical projections very difficult.

However, despite the emergence of valuable data, findings are conflicting and inconsistent limiting the use of pharmacogenetics for the personalisation of AUD treatments. [Jones et al., 2015]

Learn more on pharmacogenomics in psychiatry.

More intense treatment may be more effective when delivered by a trained therapist in conjunction with alcohol treatment issued by a medical prescriber. However, as only a few studies compare degrees of therapy intensity, optimal recommendations are not possible. [Petry et al., 2014]

Naltrexone-treated patients who had brief therapy were abstinent on 80.6% of days compared to 75.1% in the placebo group, though medication efficacy was not enhanced. As a result, brief psychosocial intervention and a first-line alcohol treatment medication or referral for specialised psychotherapy can help patients reduce their drinking frequency and binge-drinking risk.

Current guidelines for moderate drinking advise consuming no more than 2 drinks/day for men and 1/day for women with no bingeing. However, the threshold for the lowest risk of all-cause mortality was about 100 g per week (10 standard drinks in Australia). The highest risk for all-cause mortality was for drinkers of beer or spirits, as well as binge drinkers. This data supports the adoption of lower limits of alcohol consumption than are recommended in most current guidelines. [Wood et al., 2018]

Therefore, patients diagnosed with alcohol use disorder should be advised to cut down or stop drinking significantly. [USDHHS 2015]

The US FDA has approved three oral medications for the treatment of AUD: disulfiram, acamprosate and naltrexone, as well as an injectable version of naltrexone. Topiramate, in addition, also has clinical utility and should be considered in AUD.

FDA approved drugs, disulfiram, naltrexone, and acamprosate, should only be offered to patients with moderate to severe alcohol use disorder under guidance issued by the American Psychiatric Association (APA). [Reus et al., 2018]

Topiramate, disulfiram, acamprosate, and naltrexone were also approved as first-line treatments for veterans with a substance misuse disorder following a significant increase in topiramate use. [Department of Veterans Affairs 2015]

Evidence herein supports the use of naltrexone to reduce binge drinking risk and acamprosate to maintain abstinence, but disulfiram should be limited to cases requiring supervised administration only.

Gabapentin and topiramate are only recommended for patients who do not tolerate first-line treatments. [Reus et al., 2018]

Ongoing clinical management is highly advised for AUD due to high relapse rates. Pharmacotherapy should persist for at least six months, then continued indefinitely if robust clinical evaluation suggests this. [Kranzler and Soyka, 2018]

Treatment for AUD is effective. In a treatment sample of 482 patients, 30-day abstinence rates after initial assessment were at 57% compared to 12% in the untreated control group, and 40% reported no alcohol dependence or binge drinking, compared to just 20% in the control group. Changing social networks can be an effective strategy conducive to recovery. [Weisner et al., 2003]

Alcohol use is linked to high morbidity and mortality rates, and high alcohol consumption is the major risk factor for AUD. Simple screening can identify heavy alcohol users, who can then be assessed for AUD. [Kranzler and Soyka, 2018]

A narrative review of alcohol consumption as a risk factor for global burden of disease.

Diagnosis and Pharmacotherapy of Alcohol Use Disorder: A Review

Alcohol Use Disorder: A comparison Between DSM-4 and DSM-5.

The heritability of alcohol use disorders: a meta-analysis of twin and adoption studies.

Adverse childhood experiences and personal alcohol abuse as an adult.

Receipt of Services for Substance Use and Mental Health Issues among Adults: Results from the 2015 National Survey on Drug Use and Health

Disulfiram efficacy in the treatment of alcohol dependence: a meta-analysis.

Safety issues concerning the use of disulfiram in treating alcohol dependence.

Naltrexone in the treatment of alcohol dependence

Pharmacotherapy for adults with alcohol use disorders in outpatient settings: A systematic review and meta-analysis

Efficacy of extended-release naltrexone in alcohol-dependent patients who are abstinent before treatment.

Risks and benefits of nalmefene in the treatment of adult alcohol dependence: A systematic literature review and meta-analysis of published and unpublished double-blind randomized controlled trials

Safety and tolerability of as-needed nalmefene in the treatment of alcohol dependence: results from the Phase III clinical programme

Efficacy, tolerability, and safety of low-dose and high-dose baclofen in the treatment of alcohol dependence: A systematic review and meta-analysis.

The safety and efficacy of baclofen to reduce alcohol use in veterans with chronic hepatitis C: a randomized controlled trial

The role of gabapentin in the management of alcohol withdrawal and dependence.

Pharmacologically controlled drinking in the treatment of alcohol dependence or alcohol use disorders: a systematic review with direct and network meta-analyses on nalmefene, naltrexone, acamprosate, baclofen and topiramate

The pharmacogenetics of alcohol use disorder.

Treatment of substance use disorders

Department of Veterans Affairs. Department of Defense. (2015). VA/Dod Clinical Practice Guideline for the Management of Substance Use Disorders. Accessed December 2021.

How important is treatment? One-year outcomes of treated and untreated alcohol-dependent individuals