Alcohol dependence, or alcoholism, is a chronic and severe condition that the WHO estimates to affect 140 million individuals globally. The WHO classifies alcoholism as the 5th leading risk factor for premature death and disability with between 10 to 20% of all males and 5 to 10% of all females being diagnosed with alcohol dependency. [1]

In Australia, the total societal costs due to alcohol-related issues in 2010 were estimated to be $14.352b. (Australian Government)

The etiopathogenesis of alcoholism involves a complex interplay between biological, psychological and socio-environmental factors. However, one of the strongest predictors is the genetic disposition of an individual, with heritability estimated to range between 50% and 64% of cases.[2]

Young males who have experienced a traumatic event can develop low
levels of MAO‑A expression (an enzyme that breaks down serotonin), and this decrease in MAO‑A levels correlates with an increase in antisocial behaviour, which is a risk factor for alcohol dependence.

Alcohol (ethanol) is liposoluble and can cross the blood-brain barrier where it has been shown to interact directly, and indirectly, with a wide range of neurotransmitters and hormones such as γ-aminobutyric acid (GABA), glutamate, dopamine, opioids, epinephrine, norepinephrine, serotonin, acetylcholine, cannabinoids, corticotropin-releasing factor (CRF), and neuropeptide Y.

Alcohol dependence is characterised by deficits in the physiological dysregulation of motivation and reward systems, such as those in the limbic system, hippocampus, amygdala, caudate nucleus, frontal lobe and nucleus accumbens.

You can read more about the neurobiological basis of addiction in a previous post we covered. It covers the process of the progression from habit to compulsion.

The dysfunction of these systems is responsible for acute alcohol intoxication, alcohol dependence, and withdrawal syndrome.

Alcohol has both positive and negative reinforcing actions in the brain.

The positive reinforcing action of alcohol comes from the activation of the dopaminergic reward pathway in the limbic system. Dopamine is a neuromodulating compound that is released in the ventral tegmental area (VTA) and projects to the nucleus accumbens (NA) where it is acutely involved in motivation and reinforcement behaviours. 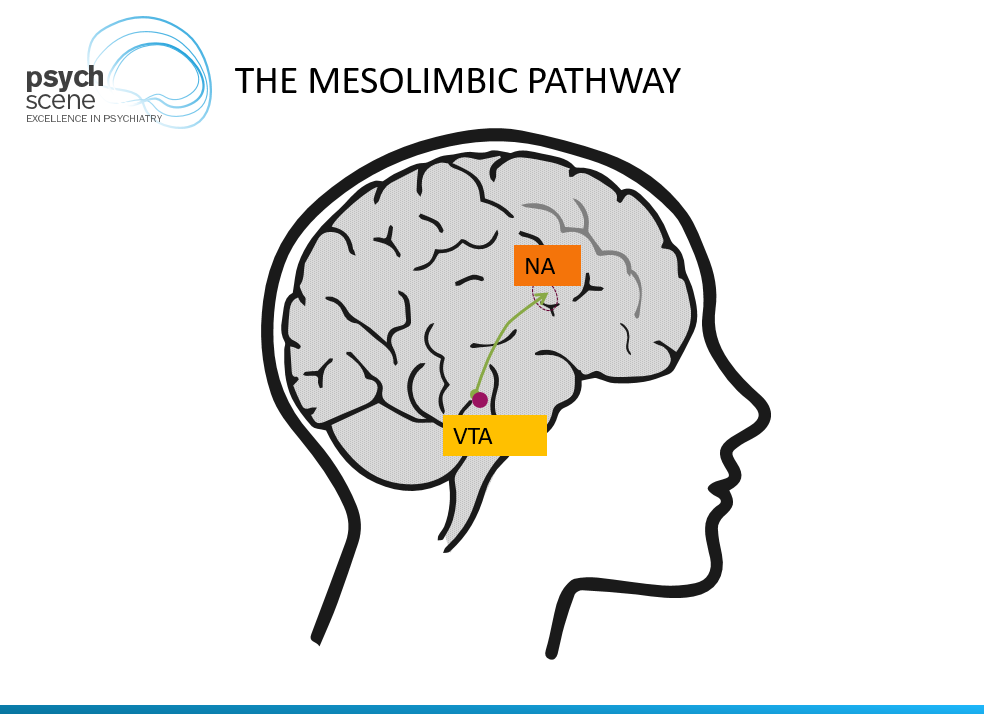 Studies have shown that there is a dose-response relationship between alcohol intake and dopamine release.[4], [5]

This ethanol-induced dopamine release is directly and indirectly promoted through alcohol’s interaction with GABAergic neurons and opioid receptors in the nucleus accumbens. [6], [7], [8]

Baclofen, a GABA-B agonist, has shown to be very effective in the treatment of alcohol dependence, and, in particular, extremely efficacious in effortlessly reducing the motivation to drink. [9]

Glutamate is the brain’s major excitatory neurotransmitter system. Alcohol reduces glutamate levels in the nucleus accumbens and suppresses glutamate-mediated signal transmission in the central nucleus of the amygdala.

Acamprosate used in the treatment of alcohol dependence has demonstrated that its mechanism of action is through its inhibition of the NMDA receptor.

Topiramate is another agent used in alcohol dependence which is not only effective in reducing alcohol craving but also reducing symptoms of depression and anxiety.

Topiramate is known to modulate the dopamine reward pathways of the brain by acting as an antagonist of excitatory glutamate receptors at a-amino-3-hydroxy-5-methylisoxazole-4-propionic acid (AMPA) and kainate receptors and inhibiting dopamine release within the mesocorticolimbic system while enhancing inhibitory GABA (by binding to a site of the GABA-A receptor). [Paparrigopoulos T et al., 2011]

There is evidence of a link between serotonin deficiency, impulsivity and drinking behaviour which may explain the role of SSRIs in suppressing alcohol reinforced behaviour in some alcohol-dependent patients.

Naltrexone is an opiate-receptor antagonist and has been shown to limit cravings by reducing the positive reinforcement effect of alcohol consumption.

Moreover, naltrexone has been shown to reduce alcohol priming (i.e. increased desire to drink), which may reduce the likelihood of heavy drinking. [11]

The primary breakdown product of ethanol is acetaldehyde, which is produced through a series of oxidative metabolic reactions. [12]

Acetaldehyde is a highly reactive compound that reacts with several catecholamines (i.e. dopamine and serotonin) in the brain.

These reactions produce psychoactive alkaloids such as salsolinol and tetrahydropapaveroline.

These alkaloid compounds have been suggested to be responsible for the physiological effects of alcohol as well as the manifestation of the behavioural aspects of alcohol-related disorders.

Disulfiram is is a drug that inhibits the enzyme aldehyde dehydrogenase and is used in the treatment of alcohol dependence. The accumulation of acetaldehyde is known to cause unpleasant side effects such as vomiting, headaches, and anxiety after the consumption of alcohol.

Disulfiram administration helps patients learn non-drinking behaviours and the ability to exercise self-control. Most individuals cease alcohol use after the administration of disulfiram due to the strong expectancy of negative consequences.

The following are key neurofunctional abnormalities with key areas of the brain involved. [3], [13], [14]

Wernicke’s encephalopathy is an acute, yet potentially reversible, neuropsychiatric disorder caused by a deficiency (or depletion) in thiamine (thiamine pyrophosphate) caused by chronic alcohol use. Other causes include gastric bypass surgery, gastric and colon cancer, hyperemesis gravidarum, long-term parenteral feeding, and poor nutrition.

Genetic susceptibility linked to thiamine transporter genes may be involved in the development of WKS in vulnerable patients.

Wernicke’s encephalopathy is a medical emergency. Untreated, it leads to death in up to 20% of cases.

Thiamine deficiency in alcohol dependence occurs because of poor absorption of thiamine from the GI tract, impaired thiamine storage and reduced thiamine phosphorylation in the brain, reducing the amount of active thiamine in the brain.

Clinical Pearl –  Only 20% of patients may show the full triad in clinical practice.

Clinicians suspecting Wernicke’s encephalopathy in a patient should treat it as an emergency and provide optimum intravenous treatment in order to avoid permanent brain damage. (BNF)

Prophylactic treatment for patients at risk of WE – Thiamine 200-300 mg IM daily for 3-5 days.

Undiagnosed and untreated, WE can lead to Korsakoff’s syndrome in 80% of cases.

The most obvious neuroradiological sign of acute WE, regardless of etiology, is bilateral hyperintensity on late-echo MRI, generally occurring in gray matter tissue of the mammillary bodies, anterior and medial nuclei of the thalamus, periventricular gray matter, inferior and superior colliculi. [17]

Image from Case courtesy of Dr Lee-Anne Slater, Radiopaedia.org. From the case rID: 12151 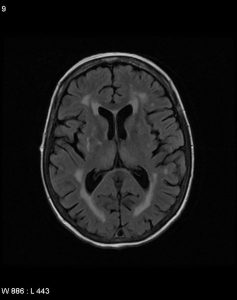 Psychiatric disorders are commonly associated with alcoholism, and the compounded dysfunction of their comorbidity is a critical element in the diagnosis and treatment of these patients.

There are four main hypotheses in dual diagnosis cases: 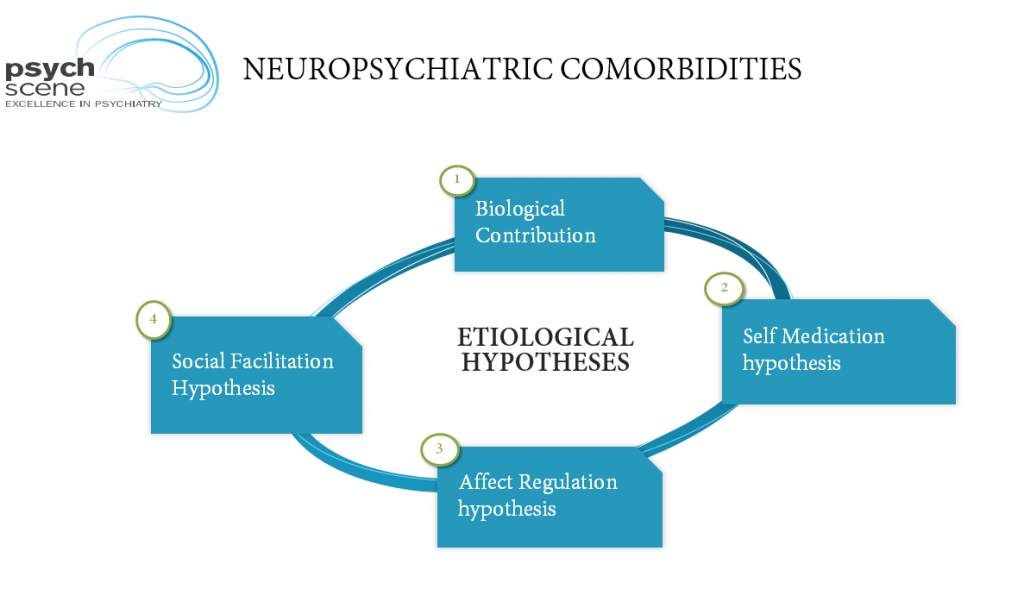 A national survey (SAMHSA) in 2014 showed that of the 20 million American adults with a substance use disorder, almost 8 million also suffered from a mental illness [18].

Mood and anxiety disorders are common alcohol abuse disorders with one large epidemiological study showing that over 30% of individuals with alcohol dependency had a co-morbid mood disorder [19].

In this study, it was shown that alcohol dependency comes with a 4-times increase in the risk of developing a major depressive disorder.

Conversely, there are also high rates of alcohol-related disorders in psychiatric patients, particularly in those with bipolar disorder and depression when compared to the general population [19], [20].

Patients with schizophrenia are also highly likely to suffer from alcohol abuse due to their tendency to devalue negative consequences and overvalue rewards [21].

The study found that alcohol use disorders were associated with all types of dementia even after controlling for other confounding factors.

Excessive alcohol consumption is associated with structural changes in certain brain areas and functional changes to neurotransmitter pathways that cause impairments to cognition and behaviour. The effects, however, differ from person to person.

Exciting developments are happening in the world of addiction that will allow clinicians and researchers to develop targeted therapies that may be able to prevent addiction and alcohol-related brain damage in dependent individuals.

4. Alcohol stimulates the release of dopamine

Yim H et al., Dissociation between the time course of ethanol and extracellular dopamine concentrations in the nucleus accumbens after a single intraperitoneal injection. Alcohol: Clinical and Experimental Research.

Cowen M and Lawrence A. The role of opioid-dopamine interactions in the induction and maintenance of ethanol consumption. Progress in Neuro-Psychopharmacology & Biological Psychiatry. 1999.

7. Increase of Dopamine in NA

Yim H and Gonzales R. Ethanol-induced increases in dopamine extracellular concentration in rat nucleus accumbens are accounted for by increased release and not uptake inhibition. Alcohol. 2000.

11. Naltrexone in the treatment of alcohol dependence.

Sullivan E and Pfefferbaum A. Neurocircuitry in alcoholism: a substrate of disruption and repair. Psychopharmacology. 2005.

14. Effects on Neurobehavioral Functions and the Brain

15. EFNS guidelines for diagnosis, therapy and prevention of Wernicke encephalopathy

Center for Behavioral Health Statistics and Quality. Behavioral health trends in the United States: Results from the 2014 National Survey on Drug Use and Health (HHS Publication No. SMA 15-4927, NSDUH Series H-50). 2015.

19. Co-morbid depression and alcohol use

21. Schizophrenia and Alcohol Use

22. Contribution of alcohol use disorders to the burden of dementia in France 2008–13