A Focus on Agomelatine – Mechanism of Action and Efficacy

The majority of antidepressant research for the past three decades has focused on increasing monoamine levels in the synaptic cleft.

This can be achieved either by blocking reuptake, or blocking the breakdown, of synaptic monoamines. It is believed that monoamine-based antidepressants initiate adaptive neuronal changes through binding to monoamine receptors and/or monoamine transporters.

However, SSRI and SNRI drugs only have modest efficacy with response rates reported at approximately 50% [1].

These drugs are also associated with common treatment-emergent adverse events including nausea, sexual dysfunction, weight gain, and insomnia all of which limits tolerability.

MECHANISM OF ACTION OF AGOMELATINE

Agomelatine is a melatonin receptor agonist and a serotonin receptor antagonist with a favourable side effect profile. There is a lack of sexual dysfunction, sleep benefits, and no discontinuation symptoms – all of which confer valuable clinical benefits in the treatment of depression [2].

The melatonergic receptors, MT1 and MT2, are strongly associated with regulating circadian rhythms. 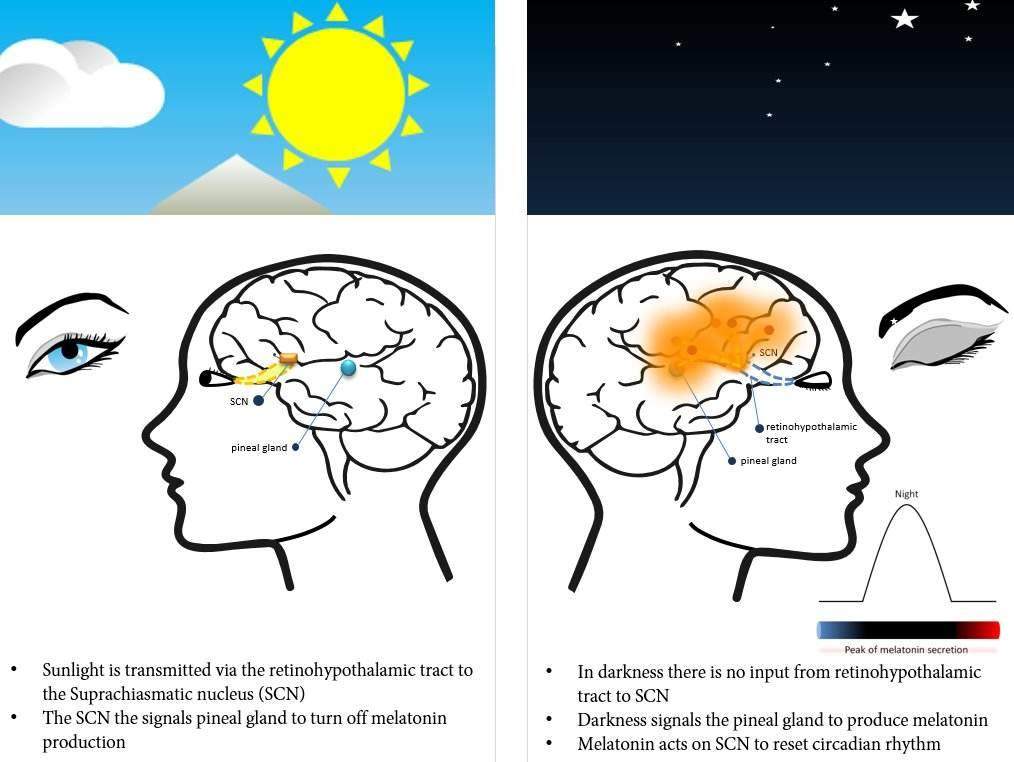 Abnormal circadian rhythms are linked to many characteristics of affective disorders, such as delayed sleep onset, early-morning wakening, and daytime fatigue [4].

Research has shown that circadian patterns of gene expression are significantly altered in the brains of patients with MDD [5]. 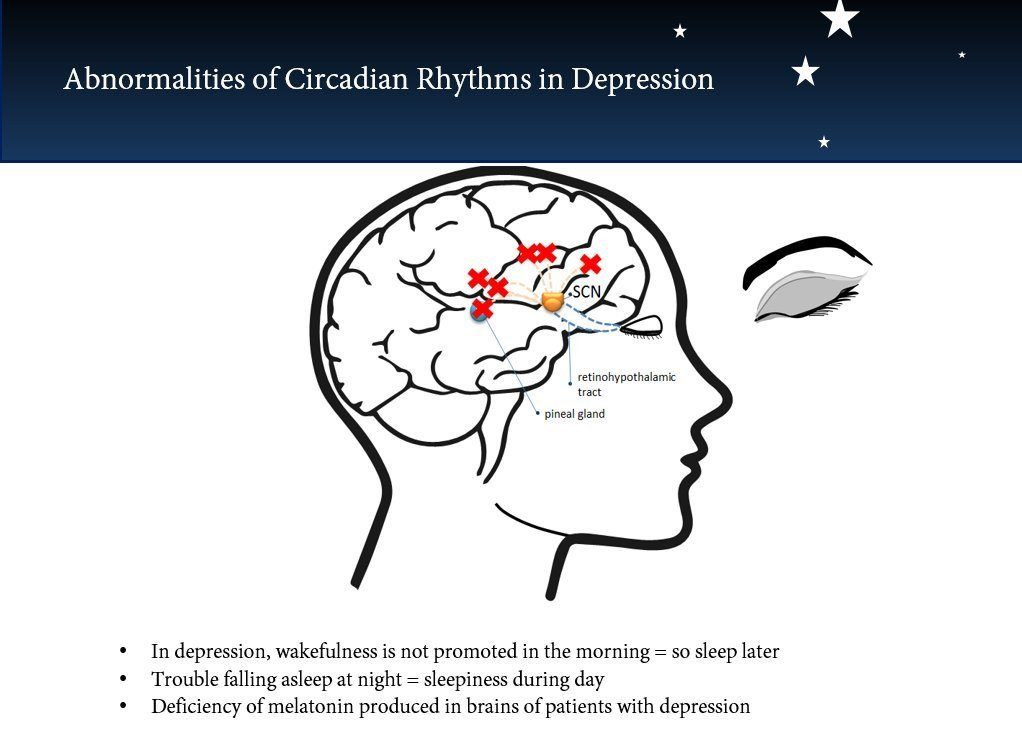 When agomelatine interacts with M1 and M2 receptors, it activates several physiological signal transduction pathways via the release of melatonin from the pineal gland.

Agomelatine has been shown to resynchronize the disturbed sleep/wake cycle in depressed patients by delaying the sleep phase rhythm.

Agomelatine has been shown to block 5-HT2C receptors within corticolimbic structures in the hippocampus.

Hyperactivity of the 5-HT2C receptors may contribute to the symptoms of MDD and agomelatine induced 5-HT2C antagonism has been shown to increase the release of dopamine and norepinephrine in the frontal cortex.

In summary, agomelatine exerts psychotropic effects through the synergistic interplay of its melatonergic agonist action (M1 and M2) and 5-HT2C receptor antagonist action. 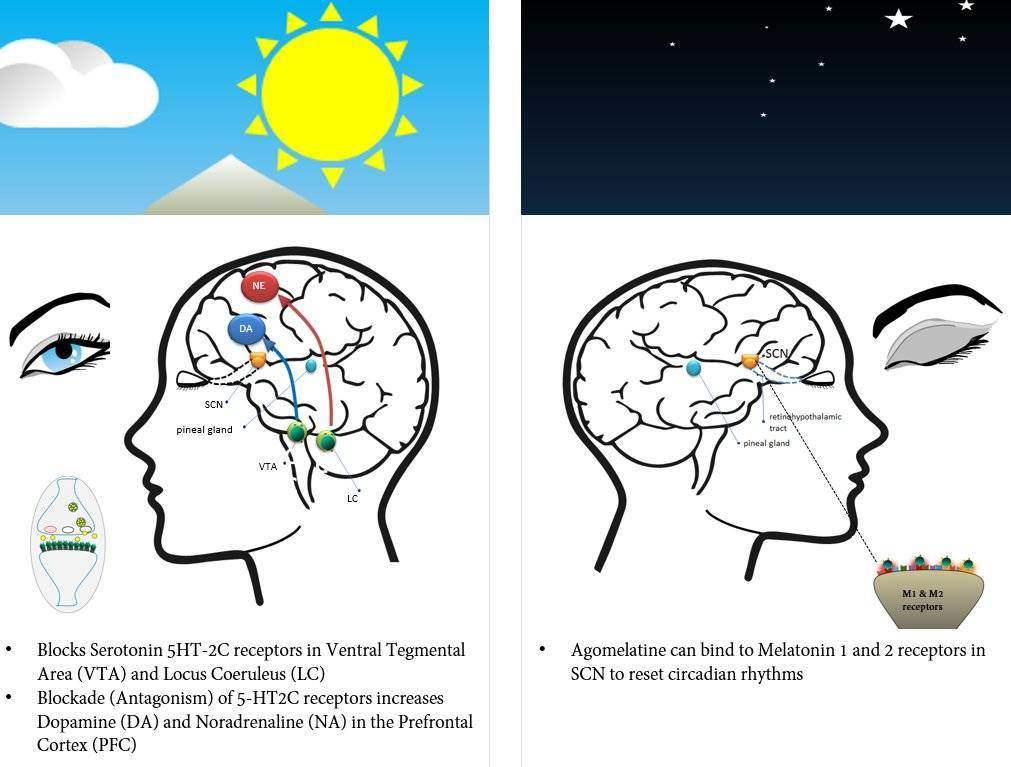 DOSING AND PHARMACOKINETICS OF AGOMELATINE

The dose of agomelatine ranges from 25 mg to 50 mg at night time.

It has an oral bioavailability of less than 5% of the required therapeutic dose however intake of high-fat foods may improve absorption.

This poor bioavailability is a result of the first-pass through the liver where it is metabolized mainly via the cytochrome P450 liver enzyme, CYP1A2.

CYP1A2 inhibitors such as fluvoxamine are contraindicated in concurrent use as it can increase the levels of agomelatine.

Agomelatine can be used concurrently with other antidepressants and mood stabilisers without the risk of negative pharmacological interactions.

Furthermore, because it is extensively metabolized in the liver, hepatic enzymes should be regularly monitored.

Agomelatine is contraindicated in patients with hepatic impairment.

We covered the clinical application of agomelatine in a previous case study.

In routine clinical practice, the observational CHRONOS study was designed to evaluate the antidepressant efficacy and safety of agomelatine [6].

By observing inpatients and outpatients with flexible dosing regimens, agomelatine was shown to reduce HAMD-17 scores from 22.5 to 4.7 in 90% of patients after 2 months of treatment.

A recent meta-analysis published in the BMJ systematically reviewed 20 clinical trials that evaluated the efficacy of agomelatine to prevent depression [7].

According to the authors:

Another study compared agomelatine with sertraline on the circadian rest/activity cycle and depression and anxiety symptoms [8].

The favorable effect of agomelatine on the relative amplitude of the circadian rest-activity/sleep-wake cycle in depressed patients at week 1 reflects early improvement in sleep and daytime functioning.

Higher efficacy results were observed with agomelatine as compared to sertraline on both depressive and anxiety symptoms over the 6-week treatment period, together with a good tolerability profile.

Agomelatine has also shown benefits and safety when combined with other antidepressants such as escitalopram, venlafaxine, bupropion in the treatment of depression and OCD. [9], [10], [11]

A recent paper  reviewed the studies and cases of agomelatine augmentation [Potměšil P, 2019]. According to the paper:

The positive results of agomelatine augmentation with other antidepressants should be confirmed through randomized, double-blind clinical trials.

Agomelatine 25 mg/day was also found to be an effective and well-tolerated adjunct to valproate/lithium for acute depression in Bipolar II disorder in an open-label study. [12]. In acute bipolar I depression, however, agomelatine adjunctive therapy was not superior to placebo. [13]

Agomelatine ranked the best amongst 21 antidepressants for acceptability with reduced dropout rates compared to other antidepressants in the 2018 Network Meta-Analysis by Cipriani et al.

A phase 3 RCT showed benefits in adolescents with depression but, not children. [Arango et al, 2021]

This first study in a paediatric population supports the efficacy of 25 mg/day agomelatine, in addition to psychosocial counselling, in treating adolescent patients with major depressive disorder, with no unexpected safety signals.

Check out our CPD module which summarises mechanisms of actions and side effect profiles of all antidepressants and antipsychotics for further information.

Loading A Focus on Agomelatine – Mechanism of Action and Efficacy

2. The Maudsley Prescribing Guidelines in Psychiatry

5. Circadian patterns of gene expression in the human brain and disruption in major depressive disorder

8. Efficacy of the novel antidepressant agomelatine on the circadian rest-activity cycle and depressive and anxiety symptoms in patients with MDD: a randomized, double-blind comparison with sertraline

Kasper S et al., Efficacy of the novel antidepressant agomelatine on the circadian rest-activity cycle and depressive and anxiety symptoms in patients with MDD: a randomized, double-blind comparison with sertraline. Journal of Clinical Psychiatry. 2010

Agomelatine for the Treatment of Generalized Anxiety Disorder: A Meta-Analysis.