Is trial and error treatment allocation a thing of the past?  The last 20 years have seen brain imaging techniques evolved immensely, giving mental health practitioners hope that assessments may soon clearly assign a patient to treatment with the highest likelihood of response.  The field of neurofeedback is well on the way.

WHAT IS NEUROFEEDBACK AND HOW IS IT APPLIED ?

Neurofeedback, or EEG biofeedback, uses operant conditioning principles to create sustained neuroplastic change.  The patient sits at a computer with electrodes placed on the scalp which relay EEG information to the software in real-time.

The patient then receives positive feedback via a computer game a few hundred milliseconds after the ‘desired’ EEG activity is produced.  Hundreds of events of the same frequency and location in the brain are positively reinforced each session, leading to long-term neuroplastic change similar to any learned skill.  Identifying the ‘desired’ EEG pattern to reinforce is the key to effective treatment.

It is a treatment that has been used effectively to treat ADHD since the 1970s.  Around that time, three Neurofeedback protocols were designed to target different frequencies of EEG activity at specific cortical locations, and, after being independently tested in large multicentre samples over time, they are now classed as ‘evidence-based’ protocols for ADHD treatment.

These three protocols are known as slow-cortical potential (SCP), sensorimotor rhythm (SMR) (Figure 1), and theta-beta ratio (TBR) Neurofeedback, founded by Niels Birbaumer, Barry Sterman and Joel Lubar respectively.  Each of these three protocols has been shown to differ from the norm in ADHD samples.

Learn more on the neurobiology of ADHD and diagnosis and management of ADHD.

The first QEEG database was developed at the NASA space biology lab (UCLA Brain Research Institute) by Ross Adey in the early 1970s.

Rather than qualitatively assessing raw EEG by sight for wave morphology (visual inspection) as is typical when investigating possible epileptiform activity, quantitative EEG databases record hundreds of healthy controls’ EEG and average the data for each electrode location by EEG amplitude and oscillation frequency (no time-domain) resulting in so-called ‘spectral’ information for each age cohort (Fig 2).

APPLICATION OF QEEG-INFORMED NEUROFEEDBACK IN ADHD

Patients had their EEG recorded, they were allocated a protocol (for example, excess theta frontally was allocated to a theta-beta ratio protocol, see again Fig 2 above), and Neurofeedback treatment commenced accordingly.

This stratification process resulted in a significant increase in the responsiveness to treatment such that 76% of patients (16/21) demonstrated a >50% reduction in symptoms, with effect sizes for inattention and hyperactivity of 1.78 and 1.22 respectively, achieving similar effects for children and adults (Fig 3 below).

Since 2012, those results have been replicated across multiple clinics worldwide using the same methodology (a publication currently under review).  Practitioners in the field that have already been using QEEG-informed Neurofeedback to increase response rates are eagerly awaiting its release.

QEEG has recently been in the spotlight due to an article recently published showing an EEG signature predicts anti-depressant medication response differentially for Sertraline and rTMS, but QEEG has for quite some time been useful in precision medicine. [Wu et al., 2020] 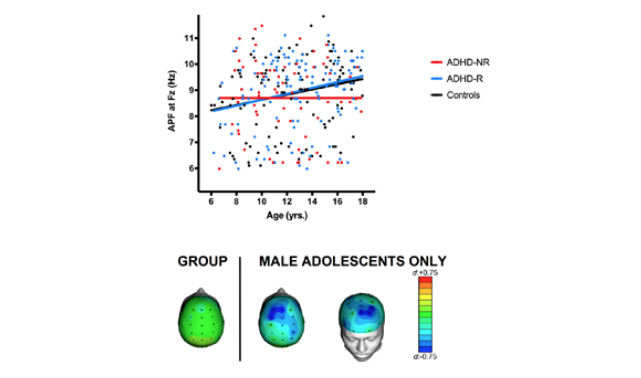 Top: APF at electrode Fz for Controls, ADHD Responders and Non-Responders plotted against age with the significant fitted trend lines. For both Controls and Responders, a clear maturational effect can be seen where APF becomes faster with age.  However, for Non-Responders the best fit was a horizontal line indicating a maturational stagnation for the non-responder group (because significant differences between groups only emerged in adolescents). Bottom: Topographical localization of the low APF for all adolescents combined (Group: left) and male adolescents only (right) (in effect size with a range of d > −0.075 to d < 0.075), further demonstrating the effect was specifically explained by male-adolescents.

The utility of QEEG as a prognostic tool – or perhaps more so as a treatment stratification marker – is growing, and biomarkers to predict response to treatment will assist precision-medicine in the future.  Exciting times for Mental Health practitioners.

The effects of QEEG-informed neurofeedback in ADHD: an open-label pilot study