If a patient is suspected of having ADHD, then during a medical review, the clinician should determine whether other medical and psychiatric disorders could mimic the symptoms of ADHD.

In some cases, ADHD may co-exist with another psychiatric comorbidity that influences the diagnosis and management.

You can go to the  following links for a refresher on ADHD: 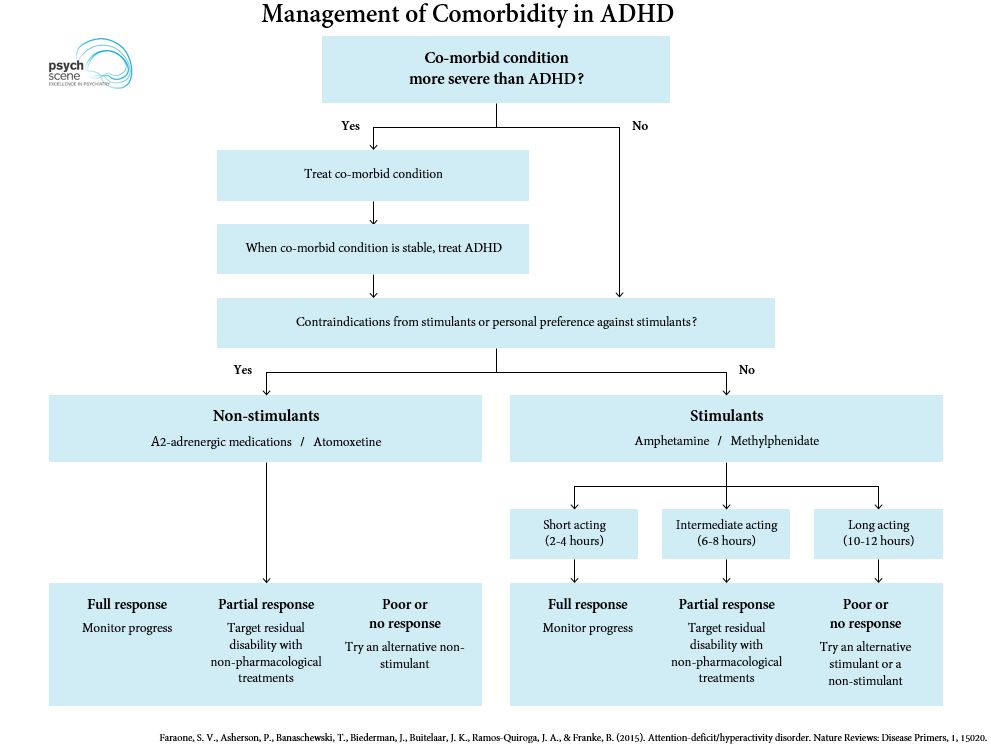 Management of ADHD and ODD:

To distinguish patients with BPD from those with ADHD, BPD patients have rapid changes to self-identity and self-image and an elevated risk of heightened rejection sensitivity, suicidal threats, self-injury, depression, and anxiety. [Canadian ADHD Practice Guidelines]

Management of ADHD and BPD:

Management of Comorbid SUD and ADHD:

Alcohol Use Disorder and ADHD:

Management of Anxiety and ADHD:

Management of Anxiety and ADHD in children.

ADHD and Comorbid MDD in children:

True comorbid MDD is differentiated by :

Symptoms such as irritability, poor concentration, anergia, sleep problems, and psychomotor or appetite changes have overlap with ADHD and other frequent comorbidities. They may be associated with the side effects of ADHD medications. [Daviss, 2016]

Management of ADHD and Comorbid MDD. 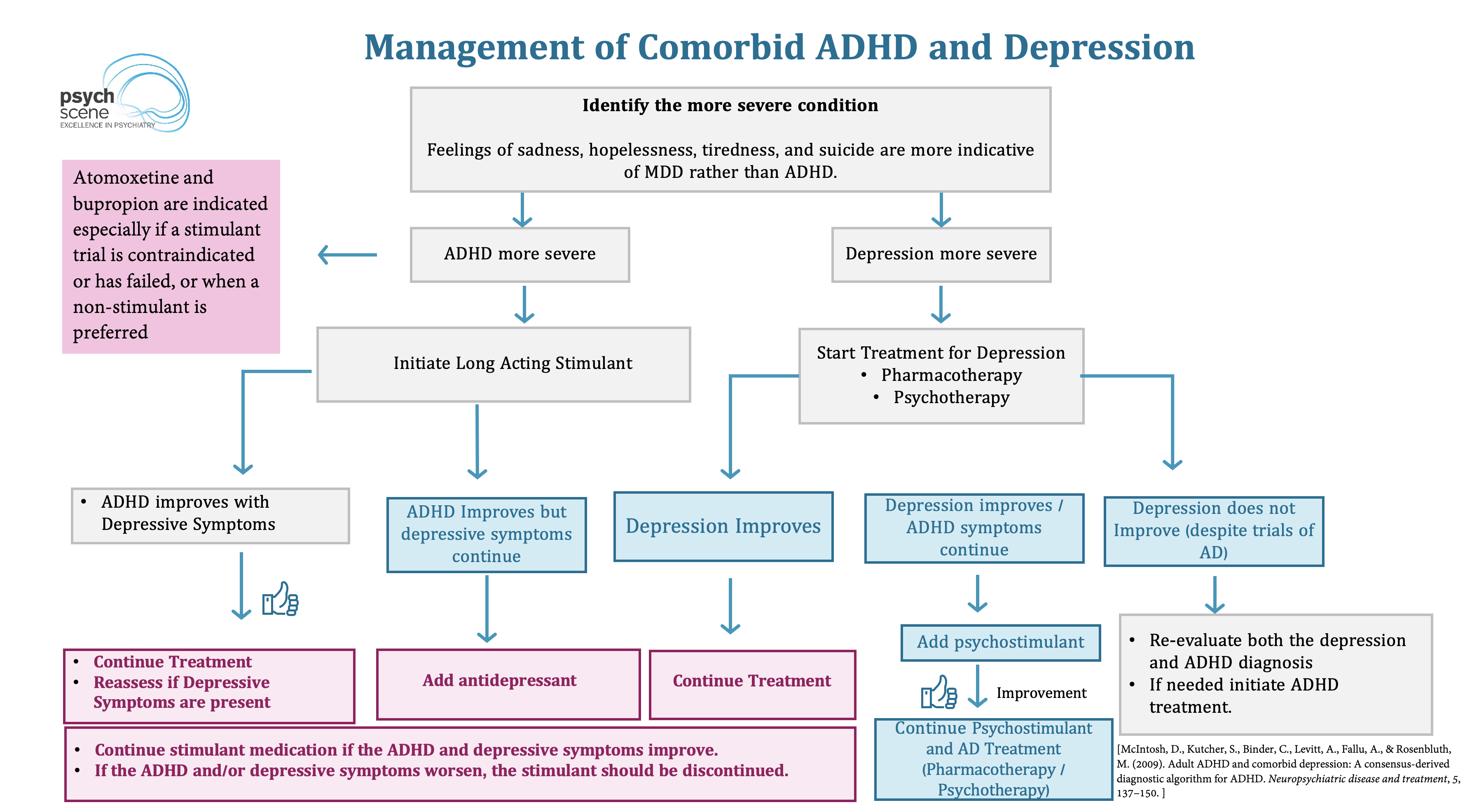 If ADHD is the primary condition

Management of ADHD and Comorbid MDD in Children and adolescents: [Turgay et al., 2006]

The following table can help differentiate ADHD from Bipolar disorder: 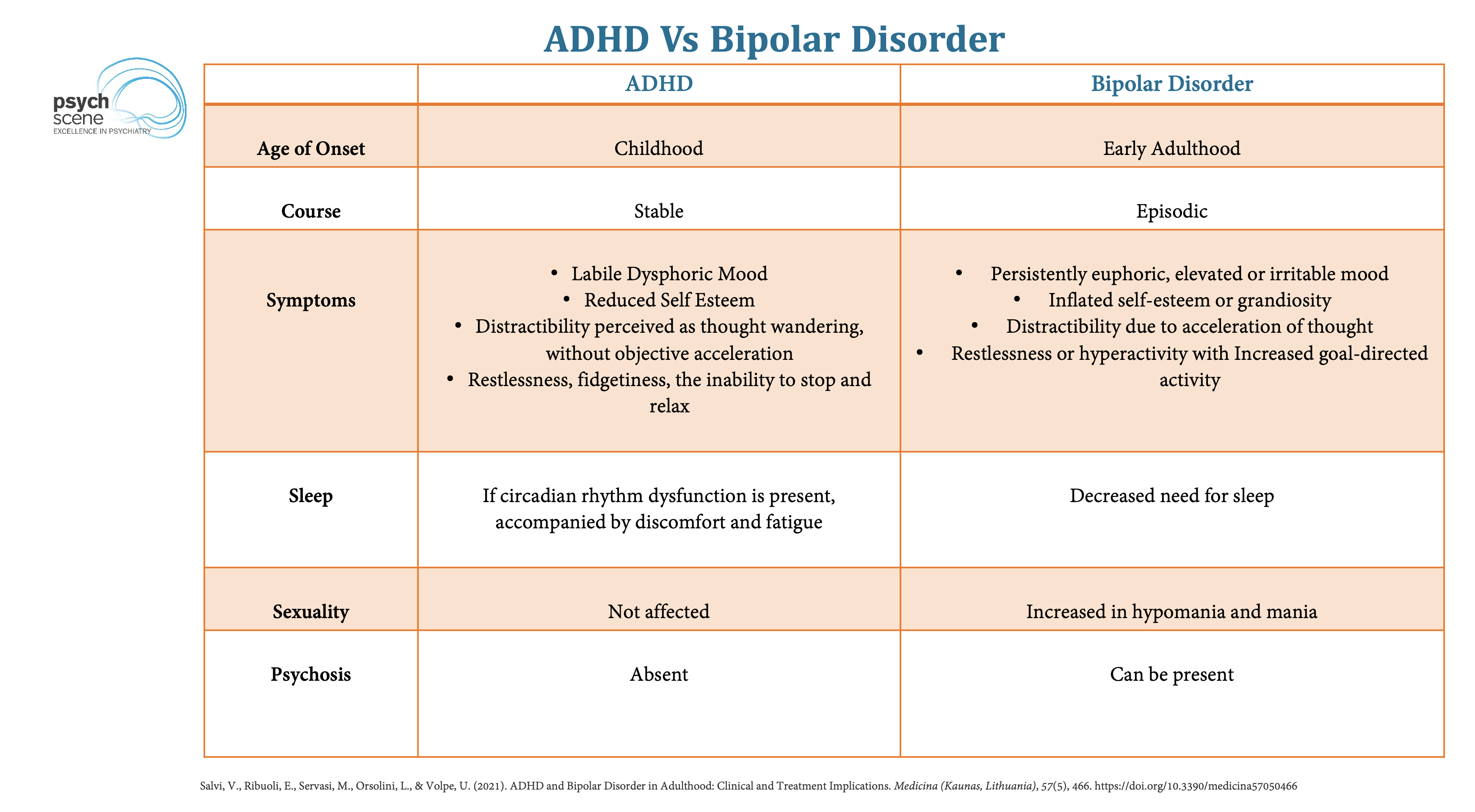 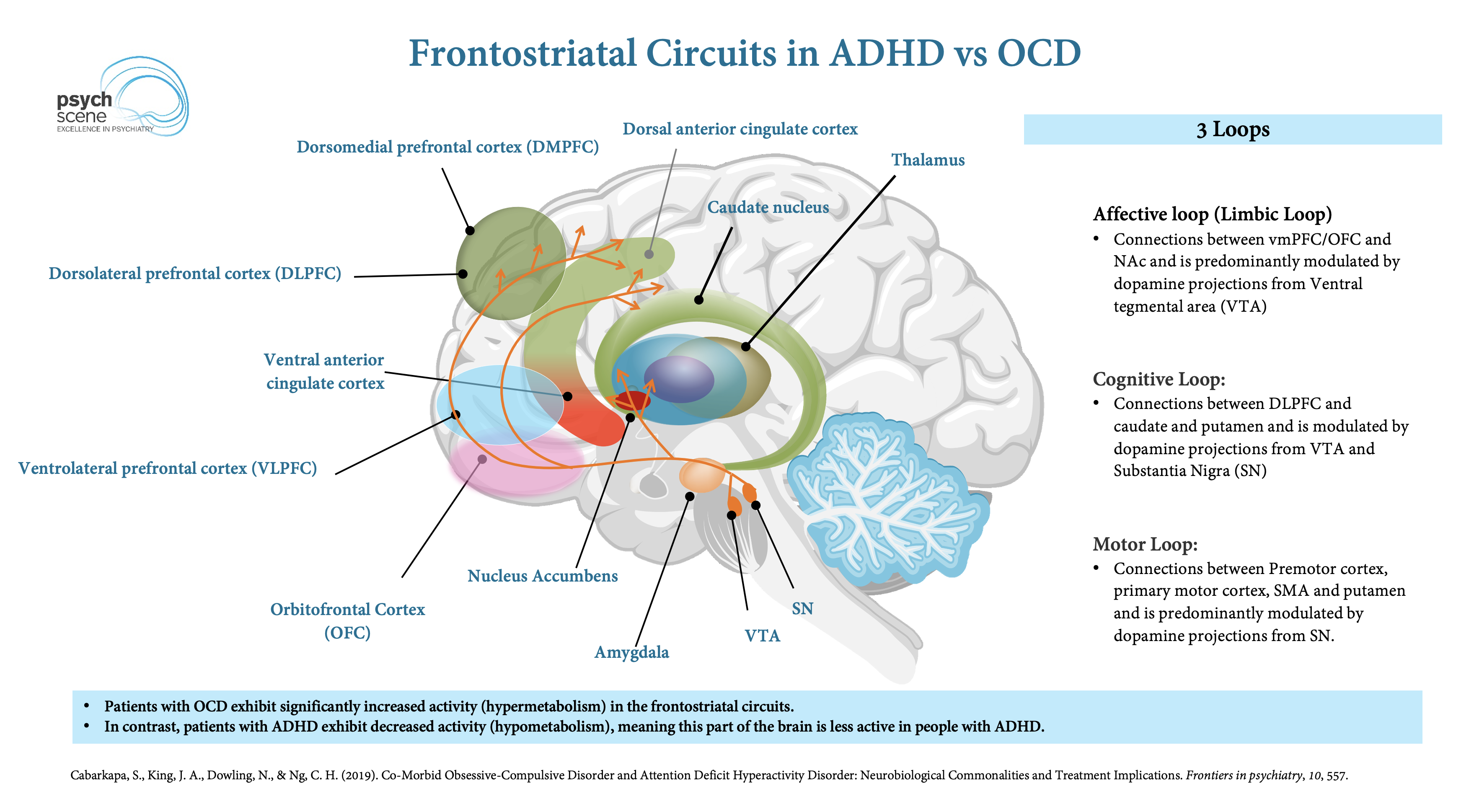 There has been increasing awareness of the cross-cutting nature of the symptom domains of impulsivity and compulsivity.  Impulsivity is characterised by an inability to resist impulses and urges, delaying gratification deficits, unreflective decision making and premature behaviour.  Compulsivity is characterised by perseverative and repetitive action and is ruminative and ridged in nature.  There is an overlap between the two conditions with features such as impulsivity observed in both groups but at markedly levels in those with ADHD.  A degree of frontostriatal hyperactivity or hypoactivity also appears to underpin symptoms in both OCD and ADHD. [Cabarkapa et al., 2019]

Management of ADHD and Comorbid OCD:

ADHD is associated with a high degree of comorbidity across the lifespan.

Comorbidities may make the diagnosis of ADHD challenging, and as a result, may delay diagnosis for some patients.

Comorbidities also confound treatment and may require other therapies beyond treatments for ADHD.  The presence of comorbidities is not a contraindication for the use of stimulants, even in conditions such as anxiety, SUD and Bipolar disorder.

In general, the more severe disorder should be addressed first.

Treating ADHD and comorbidities tends to have better outcomes than treating either disorder alone.

The Association Between ADHD and Antisocial Personality Disorder (ASPD): A Review

Differential diagnosis, comorbidity, and treatment of attention-deficit/hyperactivity disorder in relation to bipolar disorder or borderline personality disorder in adults.

The effect of methylphenidate on decision making in patients with borderline personality disorder and attention-deficit/hyperactivity disorder.

Characteristics of adults with attention deficit hyperactivity disorder plus substance use disorder: the role of psychiatric comorbidity

Attention-deficit/hyperactivity disorder and eating disorders across the lifespan: a systematic review of the literature.

Association Between ADHD and Obesity: A Systematic Review and Meta-Analysis

Are treatment results for eating disorders affected by ADHD symptoms? A one-year follow-up of adult females.

Comorbidity between ADHD and anxiety disorders across the lifespan.

Diagnosis and Management of Comorbid Anxiety and ADHD in Pediatric Primary Care.

Axis I and II comorbidity in adults with ADHD

Major Depression with ADHD: In Children and Adolescents

Differential diagnosis, comorbidity, and treatment of attention-deficit/hyperactivity disorder in relation to bipolar disorder or borderline personality disorder in adults

ADHD and Bipolar Disorder in Adulthood: Clinical and Treatment Implications

Attention-deficit hyperactivity disorder, its pharmacotherapy, and the risk of developing bipolar disorder: A nationwide population-based study in Taiwan

The Risk of Treatment-Emergent Mania With Methylphenidate in Bipolar Disorder.

Treatment of ADHD in patients with bipolar disorder

Abramovitch A., Dar R., Mittelman A., Schweiger A., (2013). “Don’t judge a book by its cover: ADHD-like symptoms in obsessive compulsive disorder,” Journal of Obsessive Compulsive and Related Disorders, 2(1) 53–61.

Treatment of ADHD in children with tics: a randomized controlled trial.

The comorbidity of ADHD and autism spectrum disorder.